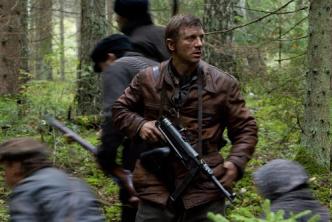 No historically grounded film is obliged to stick to the facts, and having made "Glory," "The Last Samurai" and "Blood Diamond," in order of decreasing effectiveness, director Edward Zwick knows firsthand the difficulty of forging potentially uncommercial subject matter into satisfying popular entertainment.

Yet some stories resist Hollywood manhandling more than others.

Zwick's latest, "Defiance," holds you, and its story is remarkable. The telling of that story, however, feels honest one minute and false the next, and the film's determination to mythologize the heroism of the real-life characters comes across as unseemly.

In 1941, in the area known then as Belorussia (now Belarus), a farmer's son with a checkered past named Tuvia Bielski led the rescue of more than 1,000 fellow Jews by establishing what became known as "Jerusalem in the woods" -- a settlement deep in the Naliboki Forest.

Daniel Craig portrays Tuvia, the charismatic, circumspect leader of this collective. Liev Schreiber, perpetually gunning down Nazis, is the hotheaded brother of action, Zus. Alongside Bell's Asael, there is a fourth brother, Aron, played by young George MacKay and first seen hiding in a farmhouse cellar, having survived a massacre. Later, many Jews who have the chance to join the Bielskis in the forest choose not to. The options are clear, says Schreiber's exasperated Zus, simplifying in the extreme: "Fight, or wait to be killed."

The script boils everything down to simple, reductive maxims.

The characters sound less like real people in a grimly dramatic circumstance than supporting turns in an old-fashioned play. "If my friends at the New Socialist Club could see me now!" says the self-professed intellectual played by Mark Feuerstein, assisting with the construction of a shelter. Lines such as this, akin to Zwick's habit of grouping his extras just so (like extras), keep "Defiance" firmly in movieland, as opposed to life.

Zwick's technique has its strengths. He's a front-and-center story man, though in both "Blood Diamond" and "Defiance," the strain of addressing deadly serious matters while setting up the next violent set piece becomes troubling.

Here he cross-cuts "Godfather"-style between the wedding celebration of brother Asael and his bride, and Zus' dazzling commando attack on the latest group of Nazi soldiers. It's a misplaced attempt at virtuosity; because we're witnessing wholly justified slaughter juxtaposed against loving ritual, the dramatic impact is muffled. The script hokes up the tensions between the brothers played by Craig and Schreiber, and while they're both fascinating, simmering-kettle performers, they consistently outshine their material.

Much of the film cannot help but get you in the gut. It's an action-packed melodrama at heart. And that's why "Defiance" is a limited achievement: The film should've aimed higher, given all that these people endured to have their story told.

Directed by Edward Zwick; written by Clayton Frohman and Zwick, based on the book by Nechama Tec; photographed by Eduardo Serra; edited by Steven Rosenblum; music by James Newton Howard; production designed by Dan Weil; produced by Zwick and Pieter Jan Brugge. A Paramount Vantage release.