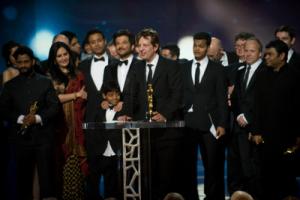 In much the same manner that the film captured the hearts of movie-goers, "Slumdog Millionaire" captured the hearts and votes of the Academy garnering 8 Oscars in total, including Best Picture, Best Director, Best Cinematography and Best Adapted Screenplay.

Sean Penn won his second Best Actor Academy Award for his role as Harvey Milk in the movie "Milk," while Kate Winslett her first Oscar in the Best Actress category for he role as Hanna Schmitz in "The Reader."

Accepting the Oscar in the category Best motion picture of the year for "Slumdog Millionaire" (Fox Searchlight), A Celador Films Production, is Christian Colson, Producer during the 81st Annual Academy Awards live on the ABC Television broadcast from the Kodak Theatre in Hollywood, CA Sunday, February 22, 2009.

But what we had was a script that inspired mad love in everyone who read it. We had a genius for a director. We had a cast and a crew who were unwavering in their commitment and whose talents are up on the screen for all of you to see."

"It's been such an inspiration to spend time with a character who so tenaciously struggles to find the beauty in everything that he sees. It's a noble aspiration to have at times like these. I dearly want to thank everyone that's been on this film: the cast, the crew, everybody at Disney and Pixar Studios." 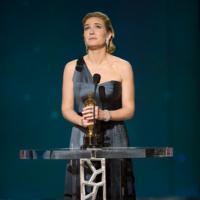 The best performance by a leading actress Oscar goes to Kate Winslet for her role in "The Reader."

"I'd be lying if I hadn't made a version of this speech before, I think I was probably eight years old and staring into the bathroom mirror. And this (holding up her statuette) would've been a shampoo bottle. Well, it's not a shampoo bottle now!"

"I feel very fortunate to have made it all the way from there to here. And I'd like to thank some of the people along the way who had faith in me, my friends and my family, especially my mum and dad, who are in this room somewhere. Dad, whistle or something, 'cause then I'll know where you are. (He whistles.) Yeah! (Waving to him.) I love you."

- Kate Winslet as Hanna Schmitz in "The Reader" 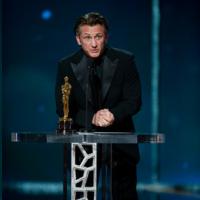 The Oscar goes to Sean Penn for his role in "Milk" (Focus Features) for Best Performance by an actor in a leading role, during the 81st Annual Academy Awards from the Kodak Theatre in Hollywood, CA Sunday, February 22, 2009.

"I did not expect this, but I, and I want it to be very clear, that I do know how hard I make it to appreciate me often. But I am touched by the appreciation"

"I'm very, very proud to live in a country that is willing to elect an elegant man president and a country who, for all its toughness, creates courageous artists. And this is in great due respect to all the nominees, but courageous artists, who despite a sensitivity that sometimes has brought enormous challenge." 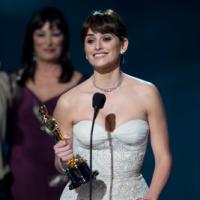 PenŽlope Cruz accepts the Oscar for Actress in a Supporting Role for her role in "Vicky Cristina Barcelona."

"Has anybody ever fainted here? Because I might be the first one. Thank you so much to the Academy. I want to share this with my fellow nominees and with the amazing ensemble of actors that I had the privilege to work with in this movie."

"I grew up in a place called Alcobendas, where this was not a very realistic dream. And I, always on the night of the Academy Awards, I stay up to watch the show and I always felt that this was, this ceremony was a moment of unity for the world because art, in any form, is and has been and will always be our universal language and we should do everything we can, everything we can, to protect its survival."

Kim Ledger, Sally Bell and Kate Ledger accept the Oscar for Best Performance by an Actor in a Supporting Role on behalf of Heather Ledger for "The Dark Knight" (Warner Bros.)

Kim Ledger: "First of all, I have to say this is ever so humbling. Just being amongst such wonderful people, such a wonderful industry. Firstly, I'd like to thank the Academy for recognizing our son's amazing work, Warner Bros. and Christopher Nolan in particular, for allowing Heath the creative license to develop and explore this crazy Joker character."

This Oscar is posthumous, as Heath Ledger died January 22, 2008.

- Heath Ledger as the Joker in the movie "The Dark Knight" 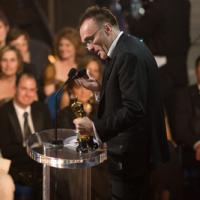 "My kids are too old to remember this now, but when they were much younger, I swore to them that if this miracle ever happened that I would receive it in the spirit of Tigger from "Winnie-the-Pooh" and that's what that was.

You've been so generous to us this evening and I wanted to thank you for that and also for an extraordinary, what a beautiful show you've done.

I don't know what it looks like on television, everybody, but in the room, it's bloody wonderful, really. So, well done, everyone."

"The Curious Case of Benjamin Button"