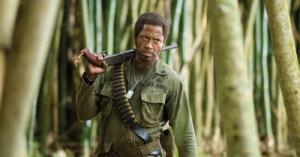 As Kirk Lazarus in the movie "Tropic Thunder", Robert Downey Jr. plays a white Australian actor who has immersed himself completely in his latest role as an African-American soldier.

Ben Stiller, Robert Downey Jr. and Jack Black play the leading actors stuck in a quagmire of a Vietnam War film, "Tropic Thunder," based on the memoirs of "Four-Leaf" Tayback (Nick Nolte).

The Vietnam veteran and the movie's hapless director (Steve Coogan) decide to break loose and "go native," aided by the special-effects explosives expert (Danny McBride). For maximum realism they venture deep into the jungle.

Robert Downey Jr., playing an Oscar-winning actor who undergoes a skin treatment to portray an African-American platoon sergeant, is by far the best thing in "Tropic," which has taken heat for its "retard" references, anti-Semitic stereotyping and Downey's risky impersonation of Russell Crowe doing Fred Williamson.

ROBERT DOWNEY JR. (Kirk Lazarus) has evolved into one of the most respected actors in Hollywood. Downey most recently starred in the title role of the international hit movie "Iron Man" alongside Terrence Howard, Jeff Bridges, Shaun Toub and Gwyneth Paltrow. He will be seen later this year in the drama "The Soloist" opposite Jamie Foxx and Catherine Keener under the direction of Joe Wright ("Atonement").

Downey received an Academy Award« nomination and won the BAFTA (British Academy Award) for Best Actor for his performance in the title role of "Chaplin," released in 1992.

Downey was also seen as the high school principal in "Charlie Bartlett"; in David Fincherĺs "Zodiac," alongside Jake Gyllenhaal and Mark Ruffalo; in Richard Linklaterĺs 2006 summer hit "A Scanner Darkly," co-starring Keanu Reeves, Winona Ryder and Woody Harrelson; and "Fur," opposite Nicole Kidman in a film inspired by the life of Diane Arbus, the revered photographer whose images captured attention in the early 1960s.

In 2005, Downey was in the Academy Award«-nominated film "Good Night and Good Luck.," directed by George Clooney. He was also seen in the action comedy "Kiss Kiss, Bang Bang," directed by Shane Black and co-starring Val Kilmer.

In 2003, Downey starred in two very different films: "The Singing Detective," a remake of the popular BBC hit musical drama featuring Downey singing and dancing alongside Adrien Brody, Katie Holmes and Robin Wright-Penn; and "Gothika," starring Halle Berry and Penelope Cruz, in which Downey played a psychiatrist who works in a mental institution.

Downey made his primetime television debut in 2001 when he joined the cast of the Fox-TV series "Ally McBeal," playing the role of attorney Larry Paul. He won the Golden Globe Award for Best Performance by an Actor in a Supporting Role in a Series, Miniseries or Motion Picture Made for Television, as well as the Screen Actors Guild Award for Outstanding Performance by a Male in a Comedy Series. In addition, Downey was nominated for an Emmy for Outstanding Supporting Actor in a Comedy Series.

In 2000, Downey co-starred with Michael Douglas and Toby Maguire in "Wonder Boys," directed by Curtis Hanson, in which he played a bisexual literary agent. In April 2000, he appeared alongside Steve Martin and Eddie Murphy in the hit comedy "Bowfinger."

In 1999, he starred in "Black and White," written and directed by James Toback and co-starring Ben Stiller, Elijah Wood, Gaby Hoffman, Brooke Shields and Claudia Schiffer. "Black and White" is about a group of white high school teens and their excursions into the lives of Harlemĺs black hip-hop crowd. He also played the villain opposite Annette Bening and Aidan Quinn in "In Dreams," directed by Neil Jordan.

In 1998, Downey co-starred with Tommy Lee Jones and Wesley Snipes in "U.S. Marshals," directed by Stuart Baird, and with Heather Graham and Natasha Gregson Wagner in the critically acclaimed "Two Girls and a Guy," directed by James Toback.

In 1997, Downey was seen in Robert Altmanĺs "The Gingerbread Man," along with Kenneth Branagh, Daryl Hannah and Embeth Davitz, as well as "One Night Stand" directed by Mike Figgis and starring Wesley Snipes and Nastassja Kinski.

Other film credits include "Restoration," "Richard III," "Natural Born Killers," "Short Cuts," "The Last Party," "Soapdish," "Air America," "Chances Are," "True Believer," "Johnny Be Good," "Less Than Zero," "The Pick-up Artist," "Back to School," "Weird Science," "Firstborn" and "Pound," in which he made his feature film debut and which was directed by Robert Downey Sr.

On November 23rd, 2004, Robert Downey Jr. released his debut album, "The Futurist," on the Sony Classics label. The album, which contains eight original songs, showed off his sultry singing voice.