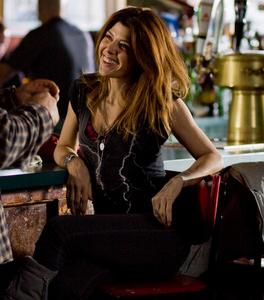 As Cassidy, Marisa Tomei portrays a middle-aged stripper entering into a tentative relationship with a down-on-his-luck professional wrestler.

Randy "The Ram" Robinson played by Mickey Rourke is the down-on-his-luck professional wrestler who has little in his life beyond his interaction with his fellow competitors and his occasional visits with Cassidy, a stripper at a local club. A serious injury in the ring, however, leaves Randy shaken ... and determined to change the lonely course his life has taken.

This is the 3rd Academy Award Oscar nomination for Marisa Tomei.

Previous nominations for Marissa Tomei were My Cousin Vinny (1992), for which she won the Oscar, and In the Bedroom (2001).

MARISA TOMEI (Cassidy) received an Academy Award for Best Supporting Actress for her role in the hit comedy MY COUSIN VINNY. Best known for rich comic performances, Tomei took a dramatic turn with IN THE BEDROOM, earning her a second Academy Award Nomination. She was recently seen in Sidney Lumet's critically praised jewel heist drama, BEFORE THE DEVIL KNOWS YOU'RE DEAD alongside Ethan Hawke and Philip Seymour Hoffman for which she earned an Independent Spirit Award nomination for Best Supporting Actress.

Recent films include the political satire WAR INC. with John Cusack, FACTOTUM with Matt Dillon, directed by Bent Hamer; the box office hit WILD HOGS, directed by Walt Becker; the film LOVERBOY directed by Kevin Bacon and MARILYN HOTCHKISS (both featured in Sundance 2005). Tomei's diverse credits are ALFIE, CHARM SCHOOL, ANGER MANAGEMENT, THE GURU, HAPPY ACCIDENTS, WHAT WOMEN WANT, SLUMS OF BEVERLY HILLS, WELCOME TO SARJEVO, THE PEREZ FAMILY, A BROTHER'S KISS, DANIKA, and UNHOOK THE STARS opposite Gena Rowlands, for which she was honored by her peers with a Screen Actor's Guild nomination.

On stage, Tomei recently starred on Broadway in Caryl Churchill’s now-classic feminist drama Top Girls. She also starred opposite Al Pacino and Dianne Wiest in Oscar Wilde's Salome in the title role. Her previous theater credits include Will Eno’s Oh! The Humanity and Other Good Intentions, Nobel Prize-winning playwright Dario Fo's We Won't Pay! We Won't Pay!, Clifford Odet's Waiting for Lefty and Rocket to the Moon, both directed by Joanne Woodward, among others. Tomei also starred in Noel Coward's Design for Living at the Williamstown Theater Festival. Tomei is a member of the Naked Angels Theater Company in New York City.