In 2005, he won an Oscar for his supporting role in Syriana, and was also nominated for writing and directing for the movie "Good Night, and Good Luck."

GEORGE CLOONEY (Michael Clayton / Executive Producer) is an Academy Award-winning actor, who has also been honored for his work as a writer, director and producer. He recently wrapped production on "Leatherheads," a romantic comedy set against the beginnings of American pro football, which he directed, produced and co-wrote. Clooney is also starring in the film opposite Renée Zellweger and John Krasinski. "Leatherheads" is the first film to be produced by Smoke House, the production company Clooney launched with Grant Heslov last year. Clooney will soon begin production on the Coen brothers’ dark comedy "Burn After Reading," in which he stars with Brad Pitt and Frances McDormand. The film marks his third collaboration with the Coens.

Both films were produced under the banner of Section Eight, the production company in which Clooney was partnered with Steven Soderbergh. Section Eight also produced 2002’s "Confessions of a Dangerous Mind," which marked Clooney’s directorial debut. For his directing work on that film, he won a Special Achievement in Film Award from the National Board of Review. Other Section Eight films included "Insomnia" and "Far From Heaven," which Clooney executive produced; "Ocean’s Eleven," "Ocean’s Twelve" and, most recently, "Ocean’s Thirteen"; "The Jacket"; "Full Frontal"; and "Welcome to Collinwood." For Section Eight’s television division, Clooney executive produced and directed five episodes of "Unscripted," a reality-based show that debuted on HBO in 2005. He was also an executive producer and cameraman for HBO’s "K Street."

Clooney previously won a Golden Globe Award for Best Actor in a Motion Picture Musical or Comedy for his work in the Coen brothers’ acclaimed 2000 comedy "O Brother, Where Art Thou?" He also earned critical acclaim for his work in the award-winning drama "Three Kings" and the Oscar-nominated "Out of Sight," which was his first collaboration with Soderbergh. Clooney’s other film credits include the Coen brothers’ "Intolerable Cruelty," "Solaris," "The Peacemaker," "Batman & Robin," "One Fine Day" and "From Dusk Till Dawn." Clooney has starred in several television series but is best known for his five years on the hit NBC drama "ER." His portrayal of Dr. Douglas Ross earned him Emmy Award, Golden Globe and SAG Award nominations. Additionally, he was an executive producer and co-star of the live television broadcast of "Fail Safe," a 2000 telefilm based on the early 1960s novel of the same name. "Fail Safe" was nominated for both Golden Globe and Emmy Awards for Best Miniseries or Motion Picture Made for Television. 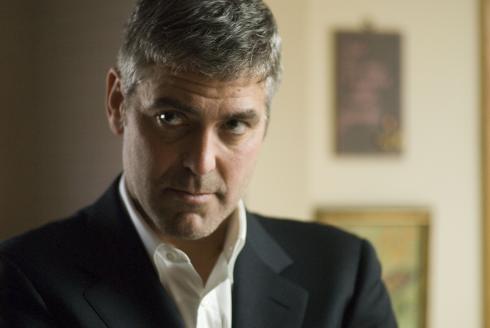 About the Role & the Movie "Michael Clayton"

A former criminal prosecutor from a working-class neighborhood, Clayton is an anomaly at the white-shoe firm; in spite of his 15-year tenure, he has not been promoted to partner and probably never will be.

His boss, Marty Bach, sees Clayton as an invaluable asset to the firm, but only in his "niche," one that is relegated to cleaning up the firm’s sticky situations quickly and quietly.

"While Michael is great at solving other people’s problems, the film catches him at the apex of dissatisfaction with his career," says Clooney, who also serves as an executive producer on the film. "He started out with ambitions of becoming a trial lawyer, but along the way what he really becomes is a bag man."

"Michael Clayton is a 45-year-old attorney who feels that he hasn’t done everything that he could have done with his life; he’s starting to think he should have done something else, or could have done better," says writer-director Tony Gilroy. "He’s made some bad choices and a lot of compromises. He has come to the point in life where his next few decisions will determine everything about him.

"How we make those choices—how fear, comfort, inertia and self-preservation bend us to the wheel—that’s the fuel for the story," offers Gilroy.

In the midst of his discontentment, Michael Clayton is sent to defuse Arthur Edens, Kenner, Bach & Ledeen’s chief litigator. The defense architect for the U/North case, Arthur suddenly suffers a crisis of conscience after finding a "smoking gun" memo that exposes the client’s moral turpitude. The character is played by Oscar nominee Tom Wilkinson, who notes, "It is very much a ‘road to Damascus’ moment. Arthur’s an expert lawyer who has been at the top of his game for years, but comes to a realization that he’s been defending a cancer."

"Given the infinity of destructive moral choices that are made every day by people who know what they're doing is wrong, it's always amazed me that there aren't more whistleblowers. When you consider how much is wrong, how deep that wrong is, and how much of it’s done by people who go home and pay their taxes and love their children, isn’t it astonishing how few actually go off the deep end?" says Gilroy. "Tom’s character is one of those magnificently intelligent madmen who can convince any judge, jury or plaintiff to drop or settle a case. It’s why he’s so good at what he does and makes the kind of money he makes. But at the end of the day, what’s the real cost?"

"Michael Clayton is a complicated character; he's not a hero who always does the right thing," says Gilroy. "All the traits that have served him so well before--his charm, his ease, his authority--none of those things are of much use to him as the story progresses. All the charisma in the world isn't going to help you find your way home when you're lost. Lots of actors say they want to play parts like that, but it takes a certain kind of bravery and ambition to hang your neck out there and really do it."

"One of the things that interested me about this project was that Tony had been saving this script for himself to direct," states George Clooney. "Tony has had much success as a screenwriter, and has been around the block enough to know what he wants. He was clearly driven to make the film, and his confidence was inspiring."

Producer Jennifer Fox offers, "George is very believable in the part, and has that unique spark that gives Michael Clayton the ability to charm people into believing that he'll make their problems go away."

Gilroy remarks, "George obviously has all the chops, and he's intelligent and charming. He can be very convincing as someone's who's conflicted, which made him perfect for the role."

"My first meeting with George lasted eleven hours," the director recalls. The two found much common ground in their affinity for 1970s cinema and spent much of their marathon meeting discussing their various influences and inspirations, overlapping decisively on such directors as Alan J. Pakula, Sydney Pollack and Sidney Lumet. "There was a certain electricity about the way films were made in the '70s. The characters were complex. The films were beautiful, yet they weren't pretty. They didn't always wrap up neatly in the end," says Gilroy.

"It was a time of groundbreaking social progress, and filmmakers were really into reflecting that," adds Clooney. "This movie deals with social conscience in an entertaining way. Tony's script was written with the passion of a filmmaker, and scripts like this don't come around very often."

Drawing inspiration for the back story of Michael Clayton from his own personal experiences, Gilroy says, "I grew up in Washingtonville, a real cops-and-firemen town on the outskirts of New York City. Every kid on my school bus had a father who was either a cop or a fireman. Michael Clayton is from a proud, working-class neighborhood where his father was a cop and his brother, Gene, is now on the force. Michael is the first male in his family who's not a cop."

Michael's career choice has created distance between himself and his family. His decision to commit the last 15 years of his life to Kenner, Bach & Ledeen has begun to take its toll. He barely has time to see his 10-year-old son, of whom he shares custody with his ex-wife, and even less time to see his ailing father. Worse, Michael has a younger, alcoholic brother, Timmy, who drove their once-promising business venture into the ground and stuck Michael with an $80,000 debt, a sum he must pay in less than a week to avoid unstated consequences.

Clooney notes, "Michael's one hope for escaping the fixer business was his walk-away money, but that's been blown on the business with Timmy, leaving Michael with very few options."