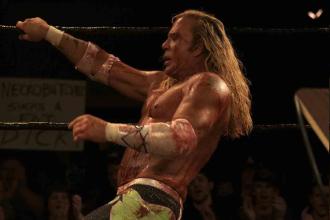 Written by Robert Siegel, former editor of The Onion, "The Wrestler" spends 105 minutes grappling at the edge of camp, cheap laughs and cliches.

Yet the way it's handled by director Darren Aronofsky and especially by Mickey Rourke -- who really should get an Oscar for his portrayal of Randy "The Ram" Robinson, a steroid-addled sweetie in tights -- it stays honest and keeps on fighting.

"The Wrestler" works for the same reason "Rachel Getting Married" works.

The way they're acted, shot, edited and scored, both films deploy a loose, rough-hewn documentary style to great dramatic advantage. The corn isn't hyped. The performances click without going for the jugular.

It is a pleasure to see Rourke finesse this amalgamation of "The Champ," "Marty," "Rocky" and a dozen other movies to his supreme advantage.

Aronofsky directs so that we notice, and appreciate, his discretion, even when he's showing Rourke pulling staple-gun staples out of his hide after a particularly rough bout in the ring. For several minutes we do not see Rourke's face. First he's sitting in the corner of a grade-school classroom, his back to the camera. This is how low The Ram has fallen since his stardom in the '80s: He's reduced to wrestling in a makeshift arena set up in a grade school and waiting in his "dressing room" for a percentage of the gate.

For much of "The Wrestler" the camera follows Randy from behind, like an eager autograph hound, as he approaches each new combat arena, or as he pounds on the door of his mobile home court manager's office.

The others on this B-minus wrestling circuit have names such as The Funky Samoan or Lex Lethal. The Ram is well-liked by all. His life is one of routines and routine disappointments along with diversions. He wears a cumbersome hearing aid, hangs out with his stripper pal Cassidy (Marisa Tomei) and, for the purposes of the plot, tries to reconnect with his estranged daughter (Evan Rachel Wood).

The Ram has heart problems, but "The Wrestler" does not.

It's sincere, violent, sentimental, predictable and extremely effective. Rourke's a remarkable physical specimen every which way, and he takes some amazing punishment, amazingly choreographed, in the wrestling scenes. He takes punishment in the more hackneyed off-ring scenes with his daughter, too, but Wood and Rourke treat the material like gold, and damned if their scenes don't work. One of the best bits has Randy working the deli counter at his supermarket, and the way he banters with the customers ("Whatcha havin', good-lookin'?" Randy asks one shlubby middle-age fellow), you sense a born performer in action.

Any number of directors and actors could've messed up "The Wrestler" -- oversold its line of goods.

Not Aronofsky and Rourke. They know, in their bones, this script is shameless. The trick is framing it as the right kind of shamelessness. Bruce Springsteen knows it, too, and his end-credits song, no less on the nose than the rest of this savvy, pungent little winner, pays tribute to all the lonely entertainers out there, working the crowds if there are crowds to be worked.

Marisa Tomei - Performance by an actress in a supporting role

Mickey Rourke - Performance by an actor in a leading role

"The Wrestler" is rated R (for violence, sexuality/nudity, language and some drug use).