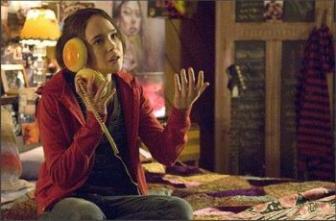 Ellen Page as "Juno MacGuff" in Juno - This is her first Oscar nomination.

With the help of her hot best friend Leah (Thirlby), Juno finds her unborn child a "perfect" set of parents: an affluent suburban couple, Mark and Vanessa (Bateman and Garner), longing to adopt.

Luckily, Juno has the total support of her parents (Simmons and Janney) as she faces some tough decisions, flirts with adulthood and ultimately figures out where she belongs.

Not to mention an extension of the conversations and situations she saw while growing up.

About the Movie "Juno"

Part of the film's appeal is the frank and funny dialogue Juno and her friends have about sex, inspired in part by Diablo. "My friends and I were like Juno and Leah. We talked about sex all the time. That was an actual discussion I had with a friend of mine when we were 16. It may be shocking to some people but it's quite realistic."

Sex aside, there is more to Juno than the underage action that gets her pregnant in the first place.

For the film's talented star Ellen Page, Juno is an atypical teen. "The part of Juno is an extremely well-written teenage girl, which is not the easiest thing to find. She is honest but original, completely devoid of stereotype, which is the most fantastic thing for an actress. My work is really just about connecting to her and trying to make her way of speech and her dialogue -- and her relationshipsauthentic. I've found that comes through when you trust the people you're working with, and you just dive into it."

Ellen Page (Juno MacGuff), a native of Halifax, Nova Scotia has established a name for herself as one of the busiest young emerging actors.

At the age of 10, Ellen began her career on the award-winning television movie Pit Pony and received a Gemini nomination for Best Performance in a Children's Program and a Young Artist Awards nomination for Best Performance in a TV Drama Series Leading Actress for her role as "Maggie MacLean." Her next role was LOVE THAT BOY, followed by the role of "Joanie" in MARION BRIDGE, winner of the "Best Canadian First Feature" at the Toronto International Film Festival. The part won Ellen an ACTRA Maritimes Award for Outstanding Female Performance for her performance. Ellen has also appeared in the cult hit TV series Trailer Park Boys. Ellen recently played the role of Lilith in the first season of ReGenesis, a one-hour drama for TMN/Movie Central for which she won a Gemini award for her performance. Ellen also starred in Mrs. Ashboro's Cat, a cable feature for The Movie Network and for which again had won a Gemini Award for Best Performance in a Childrens' or Youth Program or Series.

In 2003, Ellen played the lead in Alison Murray's MOUTH TO MOUTH, which was shot in Europe and released in the U.S. in 2006. Also in 2003, Ellen starred as part of the ensemble in WILBY WONDERFUL, a film by Daniel MacIvor, which premiered at the 2004 Toronto International Film Festival. In the summer of 2004, she played the lead in HARD CANDY, an independent feature directed by David Slade in which she co-stars with Patrick Wilson (Angels in America). HARD CANDY is a two-hander and features a tour de force performance from Ellen. HARD CANDY was screened and immediately sold to Lionsgate Films at the Sundance Festival in 2005.

Ellen was then offered the role of Kitty Pride in the third installment of X-Men shot in the fall of 2005. Immediately following X3, Ellen was offered the role of Tracey in Bruce MacDonald's THE TRACEY FRAGMENTS shot in early 2006, followed by another starring role, this time opposite Catherine Keener, in AN AMERICAN CRIME, a powerful story written and directed by Tommy O'Haver. Ellen also participated in the ensemble cast of the Canadian Classic, THE STONE ANGEL, directed by Kari Skogland. The year 2006 ended with yet another starring role opposite Dennis Quaid, Sarah Jessica Parker and Thomas Haden Church in SMART PEOPLE. Upcoming projects include JACK AND DIANE and DEFENDOR to shoot in 2007.

Although, her schedule is very demanding, Ellen still enjoys doing the same things as most young people, including, soccer, cycling, snowboarding, running and playing the guitar. 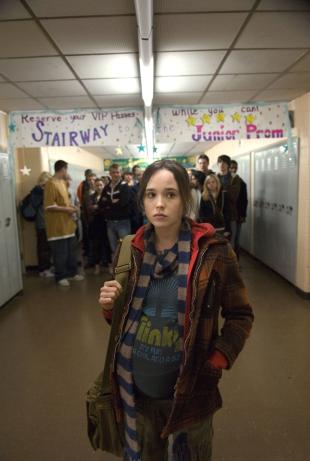