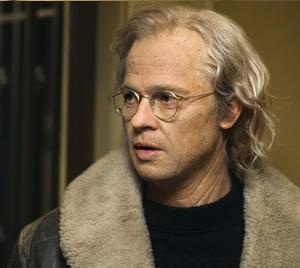 As Benjamin Button, Brad Pitt portrays a man who is born old and then grows gradually younger as his life unfolds.

I was born under unusual circumstances."

And so begins "The Curious Case of Benjamin Button," adapted from the 1920s story by F. Scott Fitzgerald about a man who is born in his eighties and ages backwards: A man, like any of us, who is unable to stop time. From New Orleans at the end of World War I in 1918, into the 21st century, on a journey as unusual as any man's life can be, the film tells the grand tale of a not so ordinary man and the people and places he discovers along the way, the loves he finds and loses, the joys of life and the sadness of death, and what lasts beyond time.

Taraji P. Henson as Queenie in the movie "The Curious Case of Benjamin Button"

BRAD PITT (Benjamin Button), one of today's most-watched film actors, is also a successful film producer, with his company Plan B Entertainment. He was an Academy Award« nominee for his performance in Terry Gilliam's "Twelve Monkeys," for which he won a Golden Globe Award. He was also a Golden Globe Award nominee for his performances in Edward Zwick's "Legends of the Fall" and Alejandro Gonzßlez I˝ßrritu's "Babel."

Pitt most recently starred in Joel and Ethan Coen's comedy thriller "Burn After Reading," which had its world premiere as the opening night attraction at the 2008 Venice International Film Festival. The previous year, he was named Best Actor at Venice for his portrayal of Jesse James in "The Assassination of Jesse James by the Coward Robert Ford" directed by Andrew Dominik. Opposite George Clooney, his "Burn After Reading" co-star, he also appeared in Steven Soderbergh's hits "Ocean's Eleven," "Ocean's Twelve" and "Ocean's Thirteen."

Born in Shawnee, Oklahoma, he grew up in Springfield, Missouri, and attended the University of Missouri at Columbia where he majored in Journalism. Right before graduation, he moved to Los Angeles to study graphic design, but instead began to pursue an acting career, studying with Roy London. Soon after, he began securing roles in television, including the series "Glory Days" and the acclaimed telefilms "The Image" directed by Peter Werner and "Too Young to Die?" directed by Robert Markowitz.