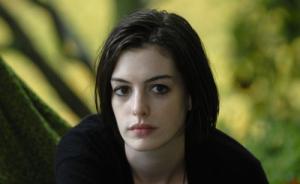 This is Anne Hathaway's first Oscar Academy Award nomination for her role as Kym in the movie "Rachel Getting Married".

The protagonist, Kym, is played as an insolent, wary bundle of nerves by Anne Hathaway.

In the film's first minute we're told that Kym is responsible for killing someone years ago in a car accident.

Nine months into Kym's latest rehab stay, the recovering alcoholic and drug addict is being let out of "the big house" to attend her sister Rachel's wedding at her family home.

When KYM (Anne Hathaway) returns to the Buchman family home for the wedding of her sister RACHEL (Rosemarie Dewitt), she brings a long history of personal crisis, family conflict and tragedy along with her. The wedding couple’s abundant party of friends and relations have gathered for a joyful weekend of feasting, music and love, but Kym —- with her biting one-liners and flair for bombshell drama -— is a catalyst for long-simmering tensions in the family dynamic.

Filled with the rich and eclectic characters that remain a hallmark of Jonathan Demme’s films, RACHEL GETTING MARRIED paints a heartfelt, perceptive and sometimes hilarious family portrait. Director Demme, first-time writer Jenny Lumet, and the stellar acting ensemble leaven the drama of these difficult but compelling people with wry affection and generosity of spirit. 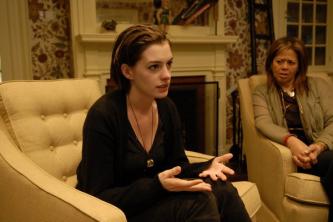 Anne Hathaway shot to stardom playing opposite Meryl Streep in the sleeper hit The Devil Wears Prada in 2006.

2008 was a busy year: in addition to her appearance in the challenging role of Kym in Rachel Getting Married, Ann Hathaway was most recently seen in the action-comedy Get Smart, starring alongside Steve Carell.

Anne Hathaway is also in the drama Passengers for Sony Pictures with co-star Patrick Wilson, directed by Rodrigo Garcia; and the romantic comedy Bride Wars with Kate Hudson, directed by Gary Winick. In 2007, Hathaway played the title role in the Jane Austen biopic Becoming Jane, starring opposite Maggie Smith and James McAvoy.

Hathaway also was recently seen in Ang Lee’s drama, Brokeback Mountain, opposite Jake Gyllenhaal, Heath Ledger, and Michelle Williams. Hathaway and the rest of the cast were nominated for Best Ensemble Cast at the 2005 ifp/Gotham Awards, as well as a 2006 SAG Nomination for Outstanding Performance by a Cast in a Motion Picture. In addition, the film, its director, and cast garnered numerous additional accolades, including seven Golden Globe nominations, and eight Academy Award nominations, including a win for Ang Lee for “Best Director” —the most received by any film that year.

In January 2005, Hathaway traveled to Cambodia on behalf of the documentary A Moment in the World, organized by Angelina Jolie. The project placed roughly 25 participants in various locations on a specific day, each instructed to videotape their surroundings at the same specific “moment in time.” The film premiered at the 2007 Tribeca Film Festival. Hathaway has been dedicating her time and efforts to community service work on this side of the globe. She has been involved with the Step Up Women’s Network, a foundation created to strengthen community resources for women and girls. She served as host for Step Up’s inaugural Inspirational Awards this past April and was honored by the foundation this past June. She is also on the advisory board for Lollipop Theater Network; an organization that screens movies in hospitals for pediatric patients suffering from chronic or life-threatening illness. Hathaway has been involved with Lollipop on a number of levels, and originally became involved while participating in a screening event for young patients at Mattel Children’s Hospital at UCLA.

In recent years, Hathaway was seen starring in Garry Marshall’s anticipated sequel, The Princess Diaries 2: The Royal Engagement. Starring opposite Julie Andrews, Hathaway reprised her role as Princess Mia Thermopolis. She received a 2002 Teen Choice Award nomination for Best Actress in a Comedy for the original The Princess Diaries. Of Hathaway, Marshall says, “The multi-talented Hathaway is a combination of Julia Roberts, Audrey Hepburn and Judy Garland.”

Other credits include the independent drama, Havoc, directed by Barbara Kopple; the title role in Miramax’s Ella Enchanted, based on Gail Carson Levine’s celebrated novel and directed by Tommy O’Haver; “Nicholas Nickleby,” based on the novel by Charles Dickens; and The Other Side of Heaven directed by Mitch Davis.

Hathaway gained Hollywood’s attention for her acclaimed turn in the series Get Real, for which she was nominated for a 2000 Teen Choice Award for Best Actress in a Drama. She studied acting at the Paper Mill Playhouse in New Jersey and at the award winning Barrow Group in New York City, which honored her achievements in April 2005. She was the first and only teen ever admitted to their intensive acting program. She also studied in the musical theater program with the Collaborative Arts Project, CAP 21, affiliated with New York University. In high school, Hathaway was nominated for the Rising Star Award, sponsored by the Paper Mill Playhouse, for the best high school performance by an actress in the state of New Jersey.

Hathaway’s theater credits include: The Lincoln Center Encore series presentation of “Carnival,” for which she won the prestigious 57th Annual Clarence Derwent Award; Andrew Lloyd Webber’s workshop of “Woman in White;” and “Forever Your Child.” In 2004-2005, she also participated in the Encores Concert Gala as well as the Stephen Sondheim Birthday Gala. Hathaway is also an accomplished dancer who studied at the Broadway Dance Center in New York City.

Kate Winslet as Hanna Schmitz in "The Reader"