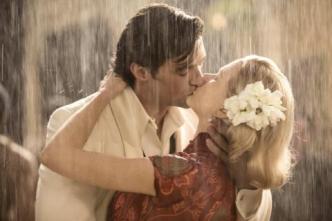 "Australia" offers everything from a cattle drive to Nicole Kidman's rendition of "Over the Rainbow" to hordes of Japanese Zeros zeroing in on screaming children during the early 1942 attack on Darwin in Australia's Northern Territory, two months after the bombing of Pearl Harbor.

The only thing missing is an iceberg.

Director and co-writer Baz Luhrmann's first project since "Moulin Rouge!" seven years ago, and his fourth since he debuted with the stage-derived "Strictly Ballroom" in 1992, assuredly is "not a bad-looking Sheila," as Nicole Kidman's character is referred to at one point.

The film plays with genres and riffs on classics the way the "Moulin Rouge!" soundtrack recycled contemporary and recent pop for its own fin de si'cle purposes. The second half develops some momentum. But you have to pass through the first half to get to the second, by which time you may find yourself drowning in high-fructose Aussie corn syrup.

The story takes place in something like the real world and a fixed historical context, which is a first for Luhrmann. His films are close collaborations with, among others, his wife Catherine Martin, the first-rate production and costume designer. "Strictly Ballroom," "William Shakespeare's Romeo + Juliet" and "Moulin Rouge!" comprised the director's so-called "red curtain trilogy," whipping up a flurry of cinematics and theatrics. Kidman receives top billing in "Australia" as Lady Sarah Ashley, a brittle little snip just asking to be knocked off her pedestal. (Think Katharine Hepburn in "The African Queen," without the facial expressivity.) The time is 1939, when "adventure and romance was a way of life," according to the opening title cards.

Lady Ashley has come from London to confront her philandering husband, whose cattle business is located on the remote Northern Territory ranch known as Faraway Downs. She's greeted by tragedy, however, and soon takes on the role of unofficial guardian of young Nullah (Brandon Walters). He is a "half-caste," part Aboriginal, part Caucasian and all adorable, guided spiritually by his grandfather, a magic man known as King George (David Gulpilil).

Hugh Jackman, recently named People's "sexiest man of the year," plays the sexiest cattleman of 1939, The Drover, who's his own boss, a loner, no strings, get it? "I wouldn't have it on with you if you were the only tart left in Australia!" he tells the Englishwoman. But it's simply a matter of time before he would, and he does. En route to love, and to save the ranch from the clutches of a rival cattle concern, he guides Lady Ashley and a multiethnic crew along with 1,500 head of cattle, across thousands of miles to the coast.

Luhrmann lays on the digital effects, which tend to make the cattle-rushing-toward-the-cliff cliffhangers look like outback variations on "The Mummy 3." The many-hands screenplay starts out as shrill romantic comedy (Kidman comes off like an amateur, which she's not), lurches into a tale of vicious prejudice against the mixed-race outcasts, climaxes with the Japanese attack, and the film has a lot of whoosh, but it's light on heartfelt engagement. Too much of the cutting and shooting and scoring conspires to tell the audience: Don't bother paying attention. There's another shot coming in a millisecond.

When the director staged a post-World War II version of Puccini's "La Boheme" on Broadway a few years ago, the results were pretty spectacular. Filling every inch of the proscenium frame but letting the story and the emotions breathe, all of Luhrmann's visual strengths came to the fore, unhindered by his cinematic itch for constant visual redirection, or strenuous comic relief. It's hard, with "Australia," to invest in a romance so synthetically preordained, featuring an orphan who is less a person than a history lesson. At times the film appears on the verge of morphing into a singing-cowboy musical. With Zeros.

About the movie "Australia"

The movie "Australia", set in northern Australia before World War II, is about an English aristocrat who inherits a sprawling ranch reluctantly pacts with a stock-man in order to protect her new property from a takeover plot. As the pair drive 2,000 head of cattle over unforgiving landscape, they experience the bombing of Darwin, Australia, by Japanese forces firsthand.

MPAA rating: PG-13 (for a scene of sensuality, brief strong language and some violence).