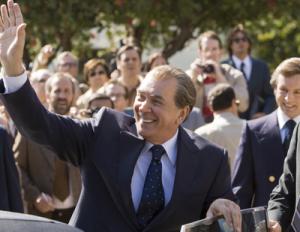 In the role of Richard Nixon, Frank Langella portrays the former president at the time of his failed attempt to resuscitate his career through a series of interviews with talk show host David Frost.

This is the first Academy Award Oscar nomination for Frank Langella.

Following his 1974 resignation, Richard Nixon withdraws from public life until talk show host David Frost persuades him -- with the help of a sizeable payment -- to participate in a series of television interviews. For Frost, the much-anticipated event offers a chance to establish himself as a serious journalist, while the disgraced former president regards the interviews as an opportunity to reestablish himself on the political stage.

There never was a question of seasoning or scale with Frank Langella, who won accolades in both London and on Broadway for the stage version of "Frost/Nixon."

Langella's re-creation of the role for director Howard was destined for an Oscar nomination. Even if Langella were lousy, he would have been nominated. It's that kind of role. (Warren Beatty, among others, considered playing it.) We love to see famous weasels humanized; it's a spectator sport that simultaneously confirms and corrects our worst suspicions about a real-life titan laid low.

Langella's interpretation is hard to resist, even if some of the choices ignore the historical record. When the real Nixon told Frost about his enemies sticking the knife in, for example, he did so with a smile, as if to defuse the violence of his description. 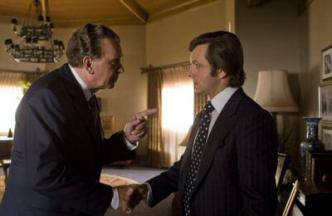 Three-time Tony Award winner FRANK LANGELLA (Richard Nixon) is among the American theater world’s greatest living actors. Though he gained recognition as a film star in the 1970s, the stage has always been his first love. His career off-Broadway was launched with an Obie Award in 1965 for his performance in poet-playwright Robert Lowell’s The Old Glory: Benito Cereno.

His other major off-Broadway productions include Edmond Rostand’s Cyrano, Arthur Miller’s After the Fall, John Webster’s The White Devil, Heinrich von Kleist’s The Prince of Homburg, André Gide’s The Immoralist and Shakespeare’s The Tempest.

Langella’s triumphs on Broadway include Tony Awards for Edward Albee’s Seascape, for Turgenev’s Fortune’s Fool and in 2007 for his role as President Richard Nixon in the New York production of Frost/Nixon. He also received a Tony nomination for his performances in Belber’s Match and Hamilton Deane’s Dracula and has starred on Broadway in productions of Strindberg’s The Father, Coward’s Present Laughter and Design for Living, Shaffer’s Amadeus, Rabe’s Hurlyburly, Nichols’ Passion, Marowitz’s Sherlock’s Last Case, Gibson’s A Cry of Players and Lorca’s Yerma, among others.

Born in Bayonne, New Jersey, Langella studied acting at Syracuse University before beginning his professional career in New York. He got his first break on screen when he was cast in Frank Perry’s 1970 drama Diary of a Mad Housewife, co-starring with Richard Benjamin and Carrie Snodgress. The film earned him a Golden Globe nomination and an award from the National Board of Review for Best Supporting Actor.

That same year, he starred in Mel Brooks’ The Twelve Chairs. A successful remake of Dracula, directed by John Badham, brought him to pop-culture stardom at that decade. Langella will next lend his voice to Universal Pictures’ animated film The Tale of Despereaux. Other upcoming projects include All Good Things, with Ryan Gosling, and The Box, with Cameron Diaz. Some of his other past films are George Clooney’s Oscar®-nominated Good Night, and Good Luck., the box-office hit Superman Returns and the drama Starting Out in the Evening. He has also starred in Adrian Lyne’s controversial Lolita; the hit comedy Dave; Ridley Scott’s 1492: Conquest of Paradise; a humorous tribute to summer stock, Those Lips, Those Eyes; the touching drama I’m Losing You; David Duchovny’s House of D; and The Ninth Gate, directed by Roman Polanski.

On television, Langella received an Emmy Award nomination for his work on I, Leonardo: A Journey of the Mind. Other major work on television includes PBS’ productions of Eccentricities of a Nightingale and Chekhov’s The Seagull; ABC’s The Beast; HBO’s Doomsday Gun; and Vonnegut’s Monkey House for Showtime, which earned him a CableACE Award. He also starred in all 10 episodes of the short-lived but widely praised HBO series Unscripted. Langella was inducted into the Theatre Hall of Fame in 2003. In addition to his three Tony