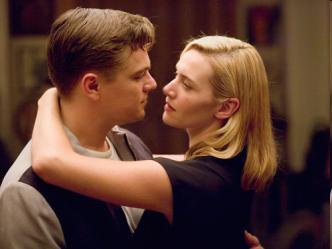 Sam Mendes, the director of "Revolutionary Road," injects a few milligrams of hope into his film version of the 1961 Richard Yates novel, an excoriating portrait of a mid-1950s marriage built on sticks, straw and delusion.

It is a harsh, merciless book. Yet you wouldn't call it solemn, and along with a redemptive grace note or two, the film -- which is extremely well acted -- lays it on pretty thickly.

However sterling the craftsmanship, the film adaptation inflates the meaning and buffs the atmospheric surfaces of Yates' story, rather than digging into its guts.

Yet its rewards are many.

For one, Kate Winslet. It's silly to say so, especially because everyone else is saying so, but she really is an amazing actress, able to break your heart and chill your blood in the same instant. (Even in a mediocrity such as "The Reader" she comes up with the goods.)

There's a shot early in "Revolutionary Road" that captures what Winslet can achieve non-verbally in five seconds' screen time.

Her character, April Wheeler, has just finished the opening-night performance of a community theater production of "The Petrified Forest." The show, alas, is a stinker, and as April changes clothes in the dressing room waiting for her husband, Frank, played by Leonardo DiCaprio, she nervously plunks herself down at the makeup mirror. As he approaches, her face is a fleeting picture of hope and gratitude: My man will fix this. He will comfort me. Then out of Frank's mouth comes a cutting, joking comment about how lousy the show was, and the look on Winslet's face reflects exactly how ashes taste.

A few minutes later, Winslet and DiCaprio enact the first of their flaying arguments in "Revolutionary Road."

At night, just off the highway, they go at it. It's the sort of fight, edging toward physical violence, from which no marriage can emerge whole. While Winslet's skill and bravery in this scene is no surprise, DiCaprio's a formidable partner. This is his finest performance. He has been effective before, but because DiCaprio is fearless about playing Frank the way April sees him, "a pathetic, self-deluded little boy," all the usual audience-identification issues are off the table. The character's layers of promise, meanness, selfishness and yearning make for a rich acting challenge, and DiCaprio -- whose face is that of the eternally boyish outsider -- rises to it.

The lasting achievement of Yates' novel has nothing to do with stultifying suburbia or facile raps on Eisenhower-era conformity.

The reason the novel still sings is its specificity and the way it bores into its central couple, playing no favorites. The characters suffer from a serious case of exceptionalism. If only Frank could leave his soul-crushing, relatively lucrative job at a business machine firm and "find himself." If only April could reconnect with her bohemian heart's desire by picking up and moving to Paris, and support her husband. If only they hadn't had children so young. At a key juncture late in "Revolutionary Road," April says it: If only they hadn't had the second child "to prove the first one wasn't a mistake."

Michael Shannon plays the addled, electro-shocked son of the local real estate agent (Kathy Bates), and he's marvelous in a role -- a schematic role, to be sure -- that feels like a refugee from an Edward Albee play.

He is the truth-teller, upsetting the suburban apple cart. Shannon's wit and off-kilter intimidation tactics are put to exemplary use. And then, following Shannon's second scene, the film slips into a methodical, slightly heavy rhythm, not helped by composer Thomas Newman's infernal recycling of a six-note piano theme that's enough to drive even the most ardent suburbanite out of town and into a loft somewhere.

He has yet to develop an interesting camera sense; so far -- and this is no crime -- he has focused on telling the story and maximizing the theatrical sparks provided by his actors. (He is married to Winslet.) "Revolutionary Road" finds Mendes in a pictorially handsome collaboration with cinematographer Roger Deakins, who makes the homey but slightly spare domestic interiors, along with the Manhattan office and restaurant scenes, glow with false promise. It's intelligent work.

Maybe "studious" is the better word.

The final moment re-creates the last couple of lines of Yates' novel, faithfully. Yet by hitting such moments with a bludgeon rather than a rapier, this honorable and often vivid interpretation of a fine, sad, ice-cold masterwork -- the story of a thwarted gray flannel suit and his highball Hedda Gabler -- just misses that extra dimension, the complexity of feeling Mendes brings to his best stage work. Those who experienced his radical reinterpretation of "Cabaret" (as long as they didn't see Teri Hatcher in the touring edition) knew they were in the presence of a major director. On film, so far, he's not quite major and not quite minor.

But when DiCaprio and Winslet unleash their character's demons, "Revolutionary Road" loses its tight, controlled sense of composition and air of solemnity and, in human terms, matters.

Michael Shannon - Performance by an actor in a supporting role

MPAA rating: R (for language and for some sexual content/nudity).