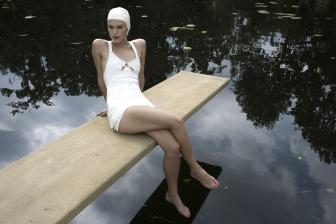 Filmed on location in the United Kingdowm, the films story spans several decades. In 1935, 13-year-old fledgling writer Briony Tallis (Saoirse Ronan) and her family live a life of wealth and privilege in their enormous mansion.

Cecilia, he hopes, has comparable feelings; all it will take is one spark for this relationship to combust.

When it does, Briony who has a crush on Robbie is compelled to interfere, going so far as accusing Robbie of a crime he did not commit. Cecilia and Robbie declare their love for each other, but he is arrested and with Briony bearing false witness, the course of three lives is changed forever.

Briony continues to seek forgiveness for her childhood misdeed. Through a terrible and courageous act of imagination, she finds the path to her uncertain atonement, and to an understanding of the power of enduring love.

As on Pride & Prejudice, Joe Wright made sure to cast actors who were of ages comparable to the characters they would be playing in Atonement. As before, he and the producers were set on Keira Knightley as their leading lady.

Wright clarifies, "I felt that Keira, who is such an intuitive actress, was ready to play Cecilia because the truth is that the part is a character role rather than that of the pretty leading lady. It's a very complex role; Cecilia is not a particularly likable person to start with, but she is redeemed by her love of Robbie and by his of her."

Knightley says, "I had a great experience on Pride & Prejudice; Joe is a sensational director. He makes sure that every actor sees the story from their character's point of view. After reading Christopher Hampton's beautiful script, I knew I wanted to play Cecilia."

Paul Webster notes, "The strong working relationship that Joe and Keira developed over the course of filming Pride & Prejudice meant they had a mutual understanding and respect that would enable them to effectively approach Cecilia together.

Wright enthuses, "Keira was not afraid of playing Cecilia as cold and difficult, and awkward in her own skin. She was brave in taking this role, since many actors are terrified of being disliked as the characters they play on-screen. The resulting performance is, I believe, her boldest and strongest to date."

For Knightley, there was considerable appeal in playing a character so different than any she has played in her career thus far. She explains, "The reason I liked this character is because she is a woman, of the kind Bette Davis might have played. She knows who she is, yet she doesn't know which direction to go in, so she's quite conflicted. She doesn't realize that actually she fancies Robbie; she's grown up with him, and at first won't admit that there's anything between them beyond a kind of brother-and-sister relationship. But, there is, and when we meet them they're on the brink."

The male lead role of Robbie Turner, the son of the Tallis family housekeeper with a Cambridge education courtesy of the Tallis family, called for an actor who, notes Wright, "had the acting ability to take the audience with him on his personal and physical journey."

McAvoy saw the story as "epic, romantic, and really about what it is to be a human being. It affected – and still affects – me hugely, and I hope it will do the same to audiences. Atonement also explores the truth of how we are at our best when we are being attacked, and Robbie Turner is forced to fight on two fronts."

Wright adds, "I'd first seen James in a play about seven years ago, and I could tell how good he was. I'd offered him parts twice before, and this third time was the charm. James has working-class roots, and that was very important; Robbie's story is that of a working-class boy whose life is often at the mercy of the snobbery of an upper class family. James also has a deep soul, and isn't afraid to show it. The character is described by Ian McEwan as having 'eyes of optimism,' and James has those. When he smiles, you smile; when he cries, you cry."

McEwan adds, "Later in the story, it is written that 'there is a stamp of experience in the corners of his eyes.' Through James' performance, you feel the pathos."

Even so, as McAvoy notes, "Joe would tell me, 'Don't beg them to cry,' meaning, the audience. Robbie was one of the most difficult characters I've ever played, because he's very straight-ahead. In the 1935 scenes, the family doesn't see him as one of them, yet he doesn't have a chip on his shoulder. Joe was very keen not to be manipulative with the audience, so he emphasized underplaying. So, later in the story, when Robbie explodes, you really feel it.

"As a director, Joe knows how to choreograph his scenes, understands the story he's telling, respects his crew, and loves actors; he made me a better actor on Atonement."

Knightley reveals, "Joe would direct us to deliver our lines swiftly; he wanted the dialogue scenes to play as they did in classic British movies. He likened it to rain pattering down, or bullets firing. Doing that informed our performances and showed us who our characters were; it was exciting to play, because that particular style of speaking is now lost. It's like doing an accent, yet it made everything easier."

Wright clarifies, "The actors in 1930s and 1940s movies had a naturalism to their performances. I wanted to recapture that with this cast; I showed them Rebecca, Brief Encounter – which James and Keira particularly adore – and In Which We Serve, to name a few."

McAvoy laughs, "Keira just flew with that style of acting. For the rest of us, it took a little bit longer!

"Joe's basic instructions to me were very simple; 'Stop acting and stop trying. Less is more.' He taught me to do away with acting that you think you need to do."

Bevan adds, "James is poised to become a movie star; he gives a fantastic performance in Atonement."

Casting not one but three Briony Tallises was a challenge the filmmakers happily met, albeit not in order of their on-screen appearances. While Academy Award winner Vanessa Redgrave was everyone's ideal to play the older Briony, and committed to the role after one meeting with Wright, the younger incarnations proved tougher to cast.

After many auditions and much searching for an actress to play Briony at age 13, casting director Jina Jay (who also cast Pride & Prejudice) came across Saoirse (pronounced "sear-sha") Ronan. The Irish actress, at the time 12 years old, has, according to Wright, "a keen sensibility which belies her years, making her perfect for the role of the young writer."

The young actress saw her character as "a girl with a very creative imagination; she can go off by herself and write stories and plays. She makes herself believe things, and after a while, she decides to go with her imagination and to believe herself instead of anyone else.

"I felt so lucky to have gotten this fantastic part. Working with Joe – who explains everything so well and so clearly – and everyone was just really special. Hopefully I'll be like Keira when I'm her age, making intelligent choices as an actress."

On the set, Wright only grew more and more impressed with Ronan. He says, "So much rests on her shoulders in that first section. Without a brilliant Briony at age 13, we would have been in troubleâ€¦A lot of actors draw on their own emotional experience; in a way they substitute their characters' emotion for their own emotion, and vice versa, and there's no right or wrong way of doing that.

"But Saoirse doesn't. She purely imagined what it would be like to be Briony Tallis, who is nothing like her. Saoirse has such empathy that she can feel and express the emotions of another human being. That's an incredible talent to have; every day she would surprise me, and fill all of us with awe."

McEwan marvels, "What a remarkable young actress Saoirse is. She gives us thought processes right on-screen, even before she speaks, and conveys so much with her eyes."

Speaking of which, adds Wright, "I consciously chose three actresses with strong eyes; Briony is the eyes of the film, which is conveyed when each of the three Brionys looks straight at the camera lens."

Hampton remarks, "With these three actresses, there is no doubt that you are seeing Briony Tallis throughout the course of her life. The hospital sequences are particular favorites of mine; Romola Garai has a quality of gravity that enhances the second section of the film."

Garai, who plays Briony at age 18, was the last of this trio to be cast. Accordingly, she was obliged to adapt her performance's physicality to fit into the Briony appearance that had already been decided upon for Ronan and Redgrave. Garai rose to the challenge, spending time with Ronan and watching footage of her to approximate the way the younger actress moved. All three actresses worked with a voice coach to keep the character's timbre in a similar range throughout the story.

Having read the book prior, Garai saw Briony as "an amazing character, and so precisely created. I usually play more outgoing characters, but after what happens in the first part of the story, Briony has become highly insular and not able to express herself.

"Joe does not have that problem; he's so honest with actors in his directions. Since I have to follow Saoirse's performance in the story, it was good to have someone who sees all for Briony and knows the character best; he was able to say, 'This is what she's thinking' or 'This is how she feels right now.' With such a clear vision of what he wants the film to be, his was a working style that I really responded to."

Tim Bevan observes, "Romola is one of a very exciting group of new-generation British actors right now. Joe has four of them in Atonement; James, Keira, Romola, and Benedict Cumberbatch."

Cumberbatch is reunited with McAvoy after previously starring together in Starter for Ten; he was cast in Atonement as Paul Marshall, the chocolate company heir whose stay with the Tallises proves eventful in the first portion of the film.

In addition to Knightley, Wright was able to reconvene two more Pride & Prejudice actors; Brenda Blethyn and Peter Wight signed on for small but pivotal roles.

"They've cast Atonement superbly, and the precision of the performances shows how good a director Joe is," sums up McEwan.

Best Actor: Daniel Day-Lewis in There Will Be Blood