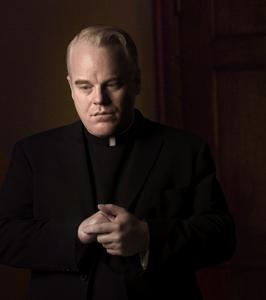 Philip Seymour Hoffman plays Father Brendan Flynn, a progressive priest in a 1960s Bronx school who is suspected by its head nun of improper relations with a student.

This is Philip Seymour Hoffman's third Academy Award nomination and the second in this category.

Philip Seymour Hoffman won an Oscar for his leading role in Capote (2005) and was Oscar nominated last year for his supporting role in Charlie Wilson's War.

The arrival of the progressive priest, Father Brendan Flynn, at a Bronx Catholic school in 1964 leads to a confrontation with the tradition-minded nun, Sister Aloysius Beauvier (Meryl Streep), who serves as its principal.

When Sister Aloysius suspects that Father Flynn may be taking an excessive interest in the school's first African-American student, she responds with a headstrong determination that is either a necessary defense of an abused boy or a heedless condemnation of an innocent man.

Philip Seymour Hoffman has completed production on Richard Curtis’ latest Project The Boat That Rocked and recently appeared in Charlie Kaufman’s Synecdoche, New York, which Kaufman wrote and directed. Last year Hoffman starred in the independent film The Savages, for which he won a Best Actor Spirit Award; Mike Nichols’ Charlie Wilson’s War which earned him an Academy Award® nomination for Best Supporting Actor and Sidney Lumet’s Before the Devil Knows You're Dead.

Prior to that, Hoffman starred in Capote, which he executive produced through his company, Cooperstown Productions. In addition to winning the Academy Award® for Best Actor, Hoffman earned a Golden Globe and SAG Award for his performance.

His LAByrinth directing credits include the world premieres of “The Last Days of Judas Iscariot,” “Our Lady of 121st Street,” “Jesus Hopped the ‘A’ Train” and “In Arabia, We’d All Be Kings,” each written by Stephen Adly Guirgis. Hoffman’s celebrated New York production of “Jesus Hopped the ‘A’ Train” was presented at the Edinburgh Fringe Festival, where it won the 2001 Fringe First Award, and London’s Donmar Warehouse, where it was nominated for an Olivier Award for Best Play of 2002. It then moved on to London’s West End for an extended run at The Arts Theatre. Similarly, his acclaimed production of “Our Lady of 121st Street” transferred Off Broadway to the Union Square Theater, where it ran for nearly six months.

Hoffman also directed Rebecca Gilman’s “The Glory of Living” at MCC Theater in 2001. He traveled to Australia to direct Andrew Upton’s “Riflemind” at the famed Sydney Theater Company and most recently he directed the Stephen Adly Guirgis play, “The Little Flower of East Orange” for LAByrinth.