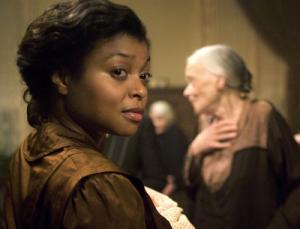 Taraji P. Henson plays Queenie, the woman who acts as nursemaid to Benjamin Button, a man who is aging backwards and has been born with the body of an old man.

This is the first Academy Award Oscar nomination for Taraji P. Henson.

TARAJI P. HENSON (Queenie), who first garnered attention in "Hustle and Flow," has recently starred in such films as "Talk to Me" opposite Don Cheadle, in the ensemble action drama "Smokin' Aces" with Jeremy Piven, Alicia Keys and Ben Affleck, and Tyler Perry's "The Family That Preys" with Kathy Bates and Alfre Woodard.

Soon to be released for Henson is a co-starring role opposite Forest Whitaker and Lil' Wayne in "Hurricane Season" and "Not Easily Broken" with Morris Chestnut, directed by Bill Duke. She is currently filming the independent feature “Once Fallen” with Ed Harris and Amy Madigan. Henson was a regular on David E. Kelly's drama "Boston Legal” and now recurs on ABC’s “Eli Stone” as the daughter of Loretta Devine’s Patti. Henson also stars in the music video for Estelle’s latest single, “Pretty Please.”

Henson was named Outstanding Supporting Actress in a Feature Film at the 2005 Black Movie Awards and received the Best Actress nod at the 2006 BET Awards for her performance as Shug in the gutsy drama "Hustle & Flow,” produced by Oscar®- nominated filmmaker John Singleton and starring Terrence Howard. She received two nominations at the 2006 MTV Movie Awards including Best Breakthrough Performance. Henson made her singing debut in "Hustle & Flow," is featured on the soundtrack, and performed the Oscar®-winning song "It's Hard Out Here for a Pimp" at the 78th annual Academy Awards®. She reunited for the third time with John Singleton to film "Four Brothers" with Mark Wahlberg and Andre 3000 for Paramount Pictures. Henson costarred with Sanaa Lathan and Simon Baker in "Something New," and is well remembered for her role as Yvette, the beautiful girlfriend of Jody (Tyrese) in "Baby Boy," written, produced, and directed by John Singleton.

For three years, Henson starred as a detective on Lifetime's "The Division." She co-starred in the CBS movie "Murder She Wrote Movie: The Last Free Man" starring Angela Lansbury and Phylicia Rashad. On series television, she has appeared in featured roles on "ER," "Strong Medicine," "CSI," "House," and others. Born and raised in Washington, D.C., the Howard University graduate resides in Los Angeles. Henson has a strong passion for helping disabled and less fortunate children and reveals, "I always stress to kids to have faith in themselves – the greatest recipe for success is self confidence."