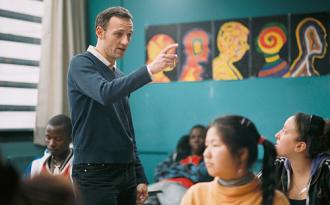 Except for its opening seconds, in which we see a teacher finishing his coffee and rushing out the door to get to work, the fantastic new film "The Class" takes place entirely within the classrooms, teachers lounge and on the playground of a working-class, multiethnic Parisian middle school.

The original French-language title was "Entre les Murs," or "Between the Walls," which really does nail it.

Between these walls an unruly world of conflict, frustration and joy comes to life, whether the topic at hand is a part of speech or a troubled student's fate.

This is one of the screen's most rewarding explorations of the teacher/student relationship in any language.

Every voice we hear makes sense; every opinion means something. Co-writer and director Laurent Cantet manages a rare thing: He simultaneously breaks your heart a little while imparting a sense of bittersweet, hard-won optimism.

Any description of "The Class" risks making the film sound plot-driven. It is not, and its documentary approach is the key to its success. Cantet has made a fiction film using real students playing characters, some based on themselves, some not. In the role of the French instructor, Francois Begaudeau plays a version of himself; Begaudeau taught in an immigrant-heavy Paris middle school and wrote a book about it, and "The Class" distills that book into a year in the life of a teacher and his combative, highly stimulating students.

For a while you may wonder where, if anywhere, "The Class" is headed.

We're plunked down into Francois' classroom as he does what he can to engage his hugely diverse students, many of African and Asian descent, all between the ages of 13 and 15. This is post-colonial France in a Petri dish, and the kids aren't afraid to question anything the authority figure has to impart. Some see Francois as the embodiment of the bourgeois class, cramming French culture and tradition and learning down their throats.

Gradually, the film focuses on the fate of a particular African student, Souleymane (Franck Keita), who comes to the defense of a student insulted by the teacher. The resulting fracas lands the student in hot water. If he's expelled, the young man is likely to be kicked back home to Mali.

It takes about 20 minutes to get the hang of Cantet's indirect dramatic approach, but when it locks into place, "The Class" is utterly absorbing.

Cantet, whose earlier work includes the more conventional "Heading South," keeps his digital cameras very close to these beautiful young faces. Now and then you notice a false moment, as when Sandra (Esmeralda Ouertani, a born performer) surprises her instructor with something she's read. You notice such things only because they're so few, and because "The Class" is such a wonderful collage otherwise. The teacher we see is no hero, and no villain, merely a flawed provocateur. In a movie largely about language and learning, it's apt the story comes down to a heated debate of the word "skank" and how it can and cannot be used, by whom, and when.

Some have detected a bourgeois odor coming off the film, notably Armond White in the New York Press, who dismissed "The Class" as racist, colonialist hogwash.

Certainly it's aesthetically conservative, and despite the hand-held digital camerawork, Cantet is working a familiar vein of social realism. Yet the film seems to me so fully inhabited, so intelligently mixed in its sympathies, you'd have to go back a long way to find any movie about education with this sort of stealth impact. Forget about geography; "The Class" applies directly to everyone teaching or learning in any school district in America.

Cantet does take the viewpoint of the harried Anglo teacher negotiating turf, and ideas, with a classroom full of contentious multicultural voices. Yet words cannot capture how much better Cantet's film is than, say, "Dangerous Minds," or "Dead Poets Society" or a dozen others like it.

It is some kind of masterwork, in which there is no clear right and wrong in terms of educational methods, only a series of compromises some can live with better than others.