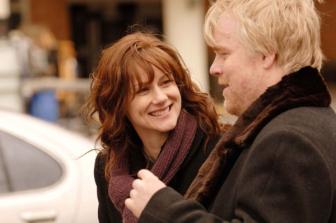 Laura Linney Best Actress Nomination 2008 for her role as "Wendy Savage" in The Savages.

This is Laura Linney's third Oscar nomination and her second nomination in the Best Actress category. She was nominated for her leading role in You Can Count on Me (2000) and her supporting role in Kinsey (2004).

About the Movie "The Savages"

The last thing the two Savage siblings ever wanted to do was look back at their difficult family history.

Having wriggled their way out from beneath their father’s domineering thumb, they are now firmly cocooned in their own complicated lives.

Jon (Academy Award winner Philip Seymour Hoffman) is a neurotic college professor writing books on obscure subjects in Buffalo. Then comes the call that informs them that the father they have long feared and avoided, Lenny Savage (Tony Award® winner Philip Bosco), is slowly being consumed by dementia and they are the only ones that can help.

Now, as they put their already arrested lives on hold, Wendy and Jon are forced to live together under one roof for the first time since childhood, rediscovering the eccentricities that drove each other crazy. Faced with complete upheaval and battling over how to handle their father’s final days, they are confronted with what adulthood, family and, most surprisingly, each other are really about.

An irreverent, hilarious and heartbreaking story revolving around a modern American family, "The Savages" portrays an all-too-common dilemma: after drifting apart emotionally and geographically over the years, two siblings Wendy (Laura Linney) and Jon (Philip Seymour Hoffman) must band together to care for an elderly parent (Philip Bosco).

THE SAVAGES is an irreverent comic drama about a pair of adult siblings who are suddenly plucked from their self-absorbed lives and forced to care for their estranged and elderly father who never cared for them.

Fortunate to have escaped from the unhappy home of their childhood, the Savage siblings are firmly ensconced in their separate complicated lives. Wendy Savage (Academy Award nominee Laura Linney) is a struggling East Village playwright who is involved with a married man and makes ends meet by working as an after-hours temp in the financial district.

Jon Savage (Academy Award winner Philip Seymour Hoffman) is a writer and college professor in Buffalo who lives an isolated academic life and can't commit to the Polish woman he has been intimately involved with for years. Despite their emotional handicaps, both of the Savages have so far managed to muddle through their lives. All that changes when a surprise phone call informs them that their father, Lenny Savage (Tony Award winner Philip Bosco), has developed dementia and can no longer take care of himself.

Now, as Wendy and Jon put their already arrested lives on hold, they butt heads over all the decisions that must be made over how to care for their father during his final days. The unfortunate situation brings long dormant conflicts to the surface and forces them to face their past. Despite their quarrels, each of them develops a deeper understanding of what adulthood and family responsibilities really mean.

Laura Linney was last seen in Barry Levinson’s MAN OF THE YEAR opposite Robin Williams and Christopher Walken, and in DRIVING LESSONS which was directed by Jeremy Brock. Laura can soon be seen in Billy Ray’s BREACH opposite Chris Cooper and Ryan Phillipe being released on February 16th, 2007. Next, Laura will appear in the film adaptation of the best selling book THE NANNY DIARIES which is being released on April 20th, 2007. This spring Laura will also be seen in JINDABYNE which was shot entirely on location in the outback of Australia. She has also completed filming on THE SAVAGES with Phillip Seymour Hoffman; THE HOTTEST STATE directed by Ethan Hawke who also stars in the film and opposite Sir Anthony Hopkins in director James Ivory’s THE CITY OF YOUR FINAL DESTINATION which is an adaptation of Peter Cameron’s novel by Oscar-winning writer Ruth Prawer Jhabvala.

Laura’s additional credits include, Kenneth Lonergan’s YOU CAN COUNT ON ME for which she was nominated for an Oscar, a Screen Actors Guild Award®, a Golden Globe Award and an Independent Spirit Award. She received the award for Best Actress from the New York Film Critics Circle and the National Society of Film Critics for her work in that film. In 2005, she received Golden Globe and Independent Spirit Award nominations for her work in THE SQUID AND THE WHALE. In 2004, she starred in KINSEY opposite Liam Neeson and directed by Bill Condon, for which she was nominated for an Oscar, a Golden Globe and a Screen Actors Guild Award. In addition, she won the award for "Best Supporting Actress" by the National Board of Review for her work in KINSEY. In 2003, Laura appeared in the ensemble romantic comedy LOVE ACTUALLY written and directed by Richard Curtis. She was also seen that year in MYSTIC RIVER directed by Clint Eastwood. Laura was nominated for "Best Supporting Actress in a Drama" by The British Academy of Film and Television Arts for "MYSTIC RIVER. Her other credits include CONGO, ABSOLUTE POWER, directed by Clint Eastwood, PRIMAL FEAR opposite Richard Gere and directed by Gregory Hoblit, THE TRUMAN SHOW opposite Jim Carrey, THE HOUSE OF MIRTH, LORENZO’S OIL, DAVE, SEARCHING FOR BOBBY FISHER, A SIMPLE TWIST OF FATE, THE MOTHMAN PROPHECIES, THE LIFE OF DAVID GALE, PS and THE EXORCISM OF EMILY ROSE.

Laura returned to television in 2004 on the NBC comedy "Frasier." She appeared in four episodes as Dr. Frasier Crane’s love interest, Charlotte. For this role, Laura won a 2004 Emmy® Award for "Best Outstanding Guest Actress In A Comedy Series." She previously won an Emmy for "Outstanding Lead Actress" for Showtime’s "Wild Iris" opposite Gena Rowlands.

Additional television appearances include the lead role of Mary Ann Singleton in PBS’s "Tales of the City" based on the novels by Armistead Maupin, a role which she reprised in "More Tales of the City" for Showtime. Laura was also seen opposite Joanne Woodward in the Hallmark Hall of Fame presentation of "Blind Spot" and opposite Steven Weber in "Love Letters" directed by Stanley Donen.

Linney is a graduate of Juilliard. She was nominated for a Tony for her performance in Richard Eyre’s "The Crucible," opposite Liam Neeson. Last spring, Laura starred in Donald Margulies’ Broadway staging of "Sight Unseen," the same play she did 12 years ago. For her role as Patricia she received a Tony nomination as well as nominations from the Drama League, the Drama Desk Club and the Outer Critic Circle for "Outstanding Actress" in a play. Her additional theatre credits include roles in the Broadway presentations of "Six Degrees of Separation;" "The Seagull;" "Hedda Gabler," for which she won a 1994 Calloway Award; Phillip Barry’s "Holiday," a comedy of manners, opposite Tony Goldwyn; "Honour," "Sight Unseen," for which she earned a Theatre World Award and a Drama Desk nomination; and John Guare’s "Landscape of the Body" at the Yale Repertory Theatre. 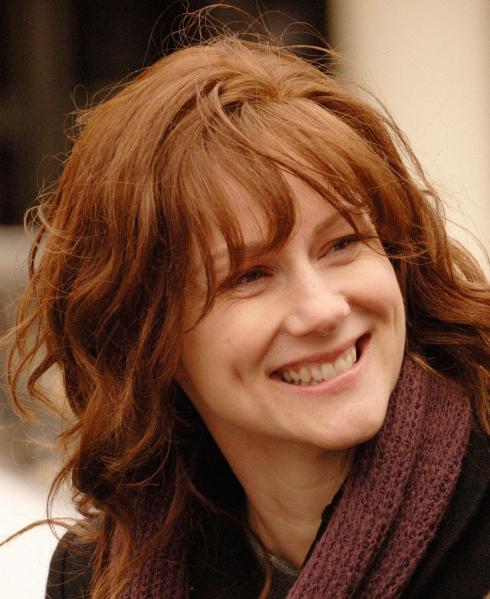