Kim Ledger, Sally Bell and Kate Ledger accept the Oscar® for Best Performance by an Actor in a Supporting Role on behalf of Heather Ledger for "The Dark Knight" (Warner Bros.)

"First of all, I have to say this is ever so humbling. Just being amongst such wonderful people, such a wonderful industry.

I'd like to thank the Academy for recognizing our son's amazing work, Warner Bros. and Christopher Nolan in particular, for allowing Heath the creative license to develop and explore this crazy Joker character."

Heath Ledger portrays the Joker, a psychopathic criminal mastermind who will stop at nothing in his scheme to outwit and humiliate Batman in the movie "The Dark Knight." 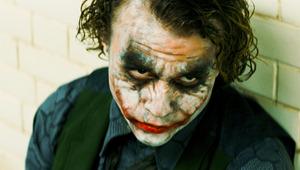 This is Heath Ledger's second Academy Award nomination and the first in this category.

Heath Ledger was nominated for his leading role in Brokeback Mountain (2005).

This Oscar nomination is posthumous, as he died January 22, 2008.

Gotham City appears to be heading toward a relatively crime-free future, because of the efforts of Batman, District Attorney Harvey Dent, and Lieutenant Jim Gordon, and Bruce Wayne hopes he will soon be able to abandon his secret identity.

However, the arrival of the terrifying Joker played by Heath Ledger, however, whose actions are motivated solely by his desire to outwit the Caped Crusader, forces Wayne to continue in his role as the city's best hope against the powers of evil.

In "The Dark Knight," Ledger makes all other comic-book screen villains look like Baby Huey.

Like Shakespeare's Iago or Richard III, like Anthony Hopkins' Hannibal Lecter or Javier Bardem's implacable murderer in "No Country for Old Men," this is no Method psychopath, asking or telling anyone about his character's motivation.

At one point Ledger throws up his hands and says, agitatedly, that it's a waste of time looking for a rationale behind the Joker's smeary Insane Clown Posse makeup.

In 2007, Ledger was seen in Todd Hayne’s "I’m Not There," for which he shared in a Robert Altman Award at the 2008 Independent Spirit Awards.

Heath Ledger's previous film credits include "Candy," "Casanova," "The Brothers Grimm," "Lords of Dogtown," "The Order," "Ned Kelly," "The Four Feathers," "Monster’s Ball," "A Knight’s Tale," "The Patriot" and "10 Things I Hate About You," which first introduced the Australian-born actor to American audiences.