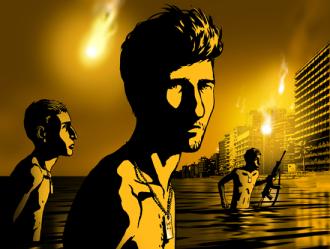 An extraordinary achievement, Ari Folman's "Waltz With Bashir" is a detective story as well as an moral inquiry into the specific horrors of one war, and one man's buried memories of that war.

It is personal filmmaking of the highest order, recognized with an Academy Award nomination for best foreign film.

Israeli writer-director Folman sets himself a near-impossible task: How to make an animated documentary focused largely about yourself without falling into a morass of self-indulgence?

At age 19, Folman was a soldier in the Israeli army, dispatched to fight in the 1982 Lebanon War. Structured as a series of interviews, each leading back to another murky piece of Folman's past, "Waltz With Bashir" begins with Folman's friend, Boaz, relaying a recurring nightmare to the filmmaker.

In the dream, which comes alive in vivid detail, a sickly yellow sky weighs down on a pack of wild dogs racing through city streets. They stop beneath Boaz's window. They wait, drooling for his hide. The dogs have haunted his dreams for years, he tells his friend. They have something to do with a gruesome incident Boaz experienced during the war.

And what about you? Boaz asks his friend. "No flashbacks from Lebanon?" Folman thinks a moment and says no. But he seems unsettled both by the question and his own answer.

That night Folman dreams for the first time of the massacre at the Sabra and Shatila refugee camps in West Beirut. In his dream, he is a young soldier walking out of the sea, with two comrades bearing rifles, under a night sky lit by flares. In what way does this dream correspond with his role in the '82 carnage?

Prodded by Boaz, Folman embarks on his research project. He interviews both friends and military personnel who can shed some light on this dark corner of his young adulthood. One colleague, Carmi, has made his fortune in selling falafel; he now lives in Holland, where Folman visits him. Carmi's memories of the war serve as a fascinating detour in Folman's quest, yet like each new piece of information, it points toward his own memories. How much has the filmmaker repressed? As another friend, Ori, tells him: "Memory is dynamic. It's alive. If some details are missing ... (sometimes) memory fills the holes with things that never happened."

The film is a visual feast. Simple two-person conversations take on the quality of a dream, the way the animation styles inform each other. Folman's artistry makes hash of such recent, comparatively crude animated history stories as "Chicago 10." Folman and art director David Polonsky treat the screen like the pages of a graphic novel. The movie was first shot on video, with interview subjects (two of the nine portrayed by actors) in a studio. Out of that came the storyboards, which led to some 2,300 illustrations used as the basis for the finished two- and three-dimensional animation, plus flash animation. The effect is anything but fussy or self-conscious; it's an organic, textured world we're thrown into.

At one point Folman, in the backseat of a taxi traveling to the Amsterdam airport, gazes out the window at the countryside. Suddenly the landscape transforms from rural Holland to blasted-out Beirut, a memory emerging from the rubble of the past. The same transition could have been done on video or film, but the animation adds both distance and dreamlike fluidity. You can't imagine any other visual approach.

"Waltz With Bashir" pins the blame for the three-day massacre of the Palestinian refugees squarely on the Christian Phalangist militia, exacting revenge for the murder of Lebanon's newly installed president, Bashir Gemayel. The specifics in this conflict matter a great deal, yet the film could be about any armed conflict, any civilian killings committed in the name of security and freedom, any ex-soldier plagued with doubts. The current, uneasy cease-fire between Israel and Hamas reminds us of how urgently we need the likes of Folman today.

At the Cannes Film Festival in May, the film struck me as "a stimulating and provocative meditation on responsibility and morality." Festival juror Natalie Portman noted at the closing press conference that when "a film as good as 'Waltz With Bashir' doesn't win a major prize, you know competition was especially formidable. Neither opinion, it seems to me now, went far enough. I doubt anyone could remain unmoved by what this picture says, and I can't imagine a filmmaker finding more bracing cinematic ways to express it.

MPAA rating: R (for some disturbing images of atrocities, strong violence, brief nudity and a scene of graphic sexual content).