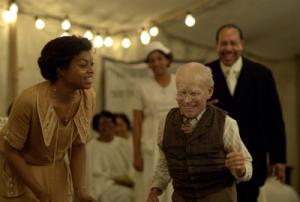 The film "The Curious Case of Benjamin Button" revels in the sights. Brad Pitt is a baby, but an 80-year-old baby! Remarkable visions abound in "Benjamin Button," especially in the first hour of this 2-hour, 47-minute fantasy.

Much as Peter Jackson re-created a Depression-era Manhattan in his "King Kong" remake, in "Benjamin Button" Fincher and his designers imagine early- and mid-20th-century New Orleans (and, among other storybook locations, the Russian port city of Murmansk) as pages in a lavishly illustrated storybook.

The filmmaking prowess rules every frame. Yet Fincher's touch is delicate.

It's also a little chilly. This tall tale of a man aging in reverse while bobbing, serenely, on life's unpredictable seas doesn't go for the throat emotionally. Eric Roth, who wrote the screen version of "Forrest Gump" (my throat never quite recovered from that one), establishes a similarly reactive character in Benjamin.

The colorful supporting characters spill their guts to the wonder of nature played by Pitt, as he begins his life a very old and tiny man, ages into late-middle age, ripens into ... well, Brad Pitt, and then embarks on the big fade into childhood, infancy and check-out time. It's Shakespeare's "Seven Ages of Man" soliloquy, but backward.

Roth's premise is that a grieving inventor, bereft after losing his son in the Great War, concocts a massive clock that spins in reverse.

This leads to the curious case of the title. His mother dead shortly after his delivery, his father horrified at his son, an ancient newborn lands on the doorstep of a retirement home and is raised by Queenie (Taraji P. Henson). First (and truest) love comes along thanks to Daisy, a free spirit played as an adult by Cate Blanchett. The framing device of the film takes place on the eve of Hurricane Katrina, in a hospital where a frail Daisy reads to her grown daughter (Julia Ormond) from the diary of her beloved Benjamin.

When we see him in flashback, as a bald, wheelchair-bound codger in miniature, we recognize Pitt, but it's not really Pitt.

It's an animated Gollum-y version of the actor we know. As the protagonist grows younger, he bounces from surrogate father to surrogate father, among them a tugboat captain (Jared Harris) who shows him the world, introduces him to the horrors of World War II (there's a scarifying U-boat attack sequence) and the relief of a safe harbor.

Tilda Swinton plays the wife of a British spy who falls in with Benjamin in Russia, teaching him the joys of the discreet bantamweight affair. She's a guarded soul, but the older/younger man (he's about 60 at this point) draws out secrets from whomever he meets.

Around the halfway point, "Benjamin Button" concentrates on the relationship between flighty, brittle Daisy and the steadily hunkifying Ben, and here the "Forrest Gump" echoes start sounding tinny. Roth's conception of Daisy is vague and cold; Blanchett's tiptop, but the role is all expediency and destiny and abstraction. Benjamin's a blank slate, by design.

In F. Scott Fitzgerald's 24-page short story, a melancholy little jest, no question of character or dimension ever came up. While the film reflects a serious interest in existential matters -- aging, loss, time's march -- "Benjamin Button" feels pretty big for its britches.

Yet it's worth seeing because the sights are truly something.

Claudio Miranda's pearly cinematography, Donald Graham Burt's luscious production design, the visual effects supervised by Eric Barba -- everything blends, and none of the seams show. The music by Alexandre Desplat, one of the best of the modern crop of film composers, sets a mood of quiet magic. It's too bad Roth's script doesn't make a more compelling entity out of Benjamin.

Pitt's dominant quality is one of slightly forbidding charm, which is a start, but this thing does run close to three hours. Still, it's Fincher's picture, and his universe is one of exquisite fakery and frequent, elegant visual delight.

The moral's pretty simple: As one character says, "Sugar, we all end up in diapers." It's not Shakespeare, but it'll do.

Brad Pitt - Best Performance by an actor in a leading role

Taraji P. Henson - Best Performance by an actress in a supporting role

About the Movie "The Curious Case of Benjamin Button"

The film "The Curious Case of Benjamin Button" -- adapted from the 1920s story by F. Scott Fitzgerald -- is about a man who is born in his eighties and ages backwards: A man, like any of us, who is unable to stop time. From New Orleans at the end of World War I in 1918, into the 21st century, on a journey as unusual as any man's life can be, the "The Curious Case of Benjamin Button" tells the grand tale of a not so ordinary man and the people and places he discovers along the way, the loves he finds and loses, the joys of life and the sadness of death, and what lasts beyond time.