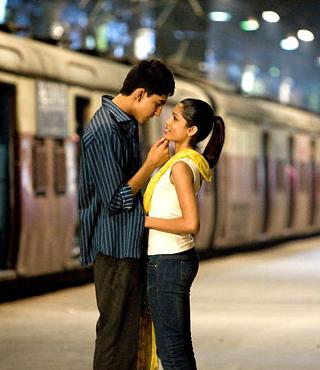 The movie "Slumdog Millionaire" is a ruthlessly effective paean to destiny, leaving nothing to chance.

It also has a good shot at winning this year's Academy Award for best picture, if the pundits, Allah, Shiva and Fox Searchlight Pictures have anything to say about it.

Each life-or-death cliffhanger and meticulous splash of color, every arrow plucked from director Danny Boyle's sari-wrapped quiver takes aim at the same objective: to leave you exhausted but wowed.

The end-credits sequence, a Bollywood-style dance number, releases you from the blur of poverty and exploitation that has come before. Scored by international superstar composer A.R. Rahman, whose stage musical "Bombay Dreams" had much of the same peppy shamelessness as Boyle's film, it's a rollicking melodrama about resourceful orphans, so it has just about everything going for it. Its success is written. Early in the film two boys dash down a narrow Mumbai street, pursued by the police, and even the stray dog observing them in doleful-eyed close-up seems to be the only possible stray dog for the shot. It is a stray dog of destiny.

Director Boyle and cinematographer Anthony Dod Mantel, shooting on high-definition digital video, are the stars, along with co-director Loveleen Tandan and screenwriter Simon Beaufoy, the "Full Monty" alumnus who adapted the source novel. His adaptation keeps three narrative trains running smoothly. It is 2006 in the former Bombay, India. An 18-year-old call-center lackey, Jamal (London-based actor Dev Patel), is undergoing interrogation and torture in a grimy Mumbai police station. He's suspected of cheating his way to national fame on the Hindi version of "Who Wants To Be a Millionaire?" The show's host (Bollywood veteran Anil Kapoor, a perfectly unctuous weasel), himself a product of the streets, leaves it to the cops to learn the truth. Could this uneducated slumdog have picked up enough stray trivia in his humble lifetime to find himself on the verge of winning 20 million rupees?

The film crisscrosses the interrogation scenes and the "Millionaire" taping sessions with scenes from Jamal's early years, full of enough Dickensian adversity and blind luck for the complete works of Dickens and Henry Fielding. Fending for themselves after their mother is killed in a riot, young Jamal (played by Ayush Mahesh Khedekar and, as a teenager, Tanay Hemant Chheda) and his brother Salim (Azharuddin Mohamed Ismail, later Ashutosh Lobo Gajiwala) subsist on the garbage dumps of Mumbai's slums. They fall prey to the sinister hands of men advertising themselves as heads of an orphanage -- in reality, they're running a cadre of beggars, and aren't above blinding their young charges with acid. (The film's R rating is more for the nonstop threat of violence inflicted on children than for what's actually depicted.)

All through the hills and valleys of chance, Jamal's fellow orphan and eternal soul mate Latika (played as a young adult by Freida Pinto) shines as goodness incarnate, even when she's under the thumb of a local gangster. The predestined young lovers are more archetypes than people, though that won't matter to most viewers just along for the ride. Boyle and his cinematographer go for the pictorial dazzle every chance they get. Boyle's one hell of a craftsman, but his attack has its suffocating side.

Adapted very freely from the Vikas Swarup novel "Q&A," the screen version changes everything from character relationships to most of the major dramatic incidents, while tripling the crisis quotient. Most of the political and religious strife in the novel is replaced by a generic riot ("They're Muslims! Get them!"), and the movie is content to stick with the apolitical, non-religious and controversy-free message that Destiny is Destiny, and a walloping crowd-pleaser is a walloping crowd-pleaser.

Boyle knows how to package and sell all kinds of tall tales, from "Trainspotting" to "28 Days Later" to "Millions" to the flawed but beautiful science fiction drama "Sunshine." I had the same reaction to "Slumdog Millionaire" both times I saw it: admiration, plus resistance to the most manipulative bits, followed by resistance to my own resistance. After last year's black-hearted "No Country for Old Men," the Oscars may well be in the mood to embrace a fairy tale sampling every imaginable genre, with a note of triumph accompanying even the worst suffering, capped by the snazziest ending money can buy.

Slumdog Millionaire MPAA rating: R (for some violence, disturbing images and some language).

About the Movie "Slumdog Millionaire"

From director Danny Boyle comes the story of Jamal Malik, an 18 year-old orphan from the slums of Mumbai, who is about to experience the biggest day of his life. With the whole nation watching, he is just one question away from winning a staggering 20 million rupees on India's "Who Wants To Be A Millionaire?"