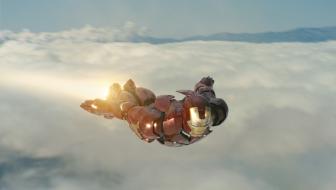 Chief among its assets is Robert Downey Jr. as billionaire industrialist Tony Stark.

When he bandies the badinage about with Gwyneth Paltrow, who plays Stark's gal Friday, Virginia "Pepper" Potts, you're seeing two actors who understand each other completely, who can mine the pulp fictions at hand for both earnestness and laughs.

As CEO of Stark Industries, the U.S. Government's top weapons contractor, Tony has achieved celebrity status by protecting American interests around the globe for decades.

Tony's carefree lifestyle is forever changed when his convoy is attacked following a weapons test he oversees and he is held hostage by a group of insurgents.

Injured by life-threatening shrapnel embedded near his already weakened heart, Tony is ordered to build a devastating weapon for Raza (FARAN TAHIR), the mysterious leader of the insurgents. Ignoring his captors' requests, Tony uses his intellect and ingenuity to build a suit of armor that keeps him alive and enables him to escape captivity.

Upon his return to America, Tony must come to terms with his past and vows to take Stark Industries in a new direction.

Despite the resistance from Obadiah Stane (JEFF BRIDGES), his right-hand man and top executive, who has taken over the reigns of the company in his absence, Tony spends his days and nights in his workshop developing and refining an advanced suit of armor that gives him superhuman strength and physical protection. With the help of his longtime assistant Pepper Potts (GWYNETH PALTROW) and his trusted military liaison Rhodey (TERRENCE HOWARD), Tony uncovers a nefarious plot with global implications.

Donning his powerful new red and gold armor, Tony vows to protect the world and right its injustices as his new alter-ego, Iron Man.