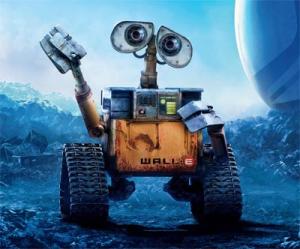 A hunk of metal with binoculars for eyes - can this be the screen's latest true hero? Yes.

In Pixar's marvelous animated feature WALL-E, set 700 years from now, planet Earth has become an uninhabitable garbage dump, whose last resident (besides a roach) is the title robot.

How he saves the planet is the subject of director Andrew Stanton's story, beautifully realized.

It's the surest thing in the infinitely malleable world of animation: Get the eyes right, and you're halfway home.

One look at the binocular-eyed trash compactor starring in the marvelous new Disney/Pixar feature "WALL-E," and you're halfway home. One look at EVE, the sleek, egg-shaped robot from space who introduces WALL-E to a world wider than his own, and those cool blue oval eyes -- which digitally transform into upside-down crescents when amused--and you're all the way home. These two characters don't say much. The first half-hour or so of "WALL-E" is practically free of dialogue. Believe me, you won't miss it.

"WALL-E" presents a grimmer future for our planet than "An Inconvenient Truth," and its strains of comedy and pathos are unusually subtle for G-rated animation. Yes, it's funny. It's just not "Kung Fu Panda" funny. And while I thoroughly enjoyed "Kung Fu Panda," "WALL-E" is a transporting experience.

The director and co-writer, Andrew Stanton, was the primary force behind Pixar's all-time box office champ, "Finding Nemo." "WALL-E" is the sort of picture an ambitious talent makes after he's delivered an enormous hit. Stanton's co-writer is Jim Reardon, a longtime contributor to and director on "The Simpsons." The two sensibilities fold together seamlessly, and while the second half of the film is less amazing and more familiar than the first, it's nonetheless a gratifying reminder that in some sectors of the global entertainment industry quality remains job one.

"WALL-E" peers 700 years into the future and sees an uninhabitable trash heap. Humankind has given in to the pernicious influence of a single global corporation, Buy n Large (in digital snippets Fred Willard plays its hearty, slippery CEO). In addition to running the robot cleanup concession, Buy n Large owns a fleet of spaceship cruisers offering refuge for the last remaining humans. The main spaceship is the Axiom, akin to a Holland America liner the size of Holland. Awaiting the word that Earth is once again habitable, the ship spends year after year in space, sustaining the last remaining humans -- blobby, pampered creatures who never get out of their whiz-bang flying loungers long enough to look at what they've become.

We don't see any of this, or meet the ship's captain (voiced by Jeff Garlin), until we're well into "WALL-E." The first 30 minutes are pure bittersweet magic. On the soundtrack, incongruously, Michael Crawford sings the opening bars of "Put On Your Sunday Clothes" from "Hello, Dolly!" The lyrics promise "adventure in the evening air," but as director Stanton zooms down to reveal what appears to be Manhattan, laden with the wreckage of ancient skyscrapers as well as towering skyscrapers of garbage, the air doesn't look so promising.

WALL-E, who resembles the mechanical love child of E.T. and Mini-Me, goes about his business, collecting, compacting and stacking cubes of trash. He is a Waste Allocation Load Lifter Earth-Class, and he has a pet cockroach who accompanies him on his sorting excursions. He sees something he likes, he keeps it: a Rubik's Cube, a spork and his prized possession, a Betamax copy of "Hello, Dolly!" From this one musical he has gleaned what his robot life lacks: a little romance.

And then comes EVE, an Extra-terrestrial Vegetation Evaluator, who initially can't seem to stop blasting everything with her laser gun. ("WALL-E" shares a couple of traits with last summer's Pixar masterwork, "Ratatouille," namely a twisty, non-formulaic narrative structure and a hostile, occasionally violent female sparring partner for the male lead.) She's programmed to look for plant life, and WALL-E has found it: a single house plant he keeps in an old boot in his trailer home. From there the film whisks both robots and the plant off to EVE's origin, the good ship Axiom. Changing gears effortlessly, "WALL-E" pits the human captain against his mutinous robot assistant (shades of "2001" -- well, more like an entire chunk), and depicts a whirring beehive of activity, recalling the factory sequences from Pixar's "Monsters, Inc."

The second tier of robot characters isn't especially memorable, and the story amps up the chaos at a predictable point in the story, when WALL-E and EVE become "rogues" on the lam. As with "Ratatouille," which shifted its focus midpoint from critter (Remy) to human (Linguini), "WALL-E" introduces the captain about halfway through, and while the goggle-eyed, musical-comedy-loving hero of the title isn't sidelined, he's required to share the story with a lot of other characters.

Small matters. I don't want to give much more away -- not because the story depends on mystery or surprise, but because it is such a crafty and beautiful accomplishment. The production design by Ralph Eggleston, the brrrrrrrps and bleeps of the robotic voices (Ben Burtt concocted the symphony that is WALL-E), the rigorously defined color scheme (rarely has a single green plant carried so much visual weight): All the elements fold into a unified creation. Stanton doesn't strain for a message or for his emotional effects. The story's core may be closer to "The Little Prince" than "The Little Mermaid," but this vision of an optimist surviving a pretty rough patch in his planet's history just plain works. Like Voltaire's "Candide," WALL-E learns to tend to the garden. While I may argue with the little guy's taste in musicals, it's remarkable to see any film, in any genre, blend honest sentiment with genuine wit and a visual landscape unlike any other.

Good for Pixar! And good for us.

Film Critic Rating: 4 out of 4 Stars

About "WALL-E" the Movie

What if mankind had to leave Earth, and somebody forgot to turn off the last robot?

Set in a galaxy not so very far away, "WALL-E" is an original and exciting comedy about a determined robot. After hundreds of lonely years doing what he was built for, WALL-E (Waste Allocation Load Lifter Earth-Class) discovers a new purpose in life (besides collecting knick-knacks) when he meets a sleek search robot named EVE (Extra-terrestrial Vegetation Evaluator). EVE comes to realize that WALL-E has inadvertently stumbled upon the key to the planet's future, and races back to space to report her findings to the humans who have been eagerly waiting on board the luxury spaceship Axiom for news that it is safe to return home. Meanwhile, WALL-E chases EVE across the galaxy and sets into motion one of the most incredible comedy adventures ever brought to the big screen.

Joining WALL-E on his fantastic journey across the universe 800 years into the future is a hilarious cast of characters including a pet cockroach and a heroic team of malfunctioning misfit robots.

The ninth feature from Disney and Pixar Animation Studios, "WALL-E" follows the Studio's most recent triumph, "Ratatouille," which won an Oscar® for Best Animated Feature, garnered the best reviews for any 2007 release, and was a box office hit all over the globe. The combined worldwide box office gross for Pixar's first eight releases is an astounding $4.3 billion.

"WALL-E" is the latest film from Academy Award®-winning director/writer Andrew Stanton, who joined Pixar in 1990 as its second animator and the fledgling studio's ninth employee. He was one of the four screenwriters to receive an Oscar nomination in 1996 for his contribution to "Toy Story" and was credited as a screenwriter on subsequent Pixar films, including "A Bug's Life," "Toy Story 2," "Monsters, Inc." and "Finding Nemo," for which he earned an Oscar nomination as co-writer. Additionally, he co-directed "A Bug's Life," executive produced "Monsters, Inc." and the 2007 Academy Award-winning "Ratatouille," and won an Oscar for Best Animated Feature for "Finding Nemo."

Disney-Pixar's "WALL-E," directed by Andrew Stanton, from an original story by Stanton and Pete Docter, and screenplay by Stanton and Jim Reardon, is executive produced by John Lasseter and produced by Jim Morris ("Star Wars, Episodes I and II," "Pearl Harbor," "The Abyss," and three of the "Harry Potter" films), who helped create some of the industry's ground breaking visual effects during his 18-year association with ILM as president of Lucas Digital. Lindsey Collins, an 11- year Pixar veteran, serves as co-producer; Tom Porter is associate producer. Oscar®-winning cinematographer Roger Deakins serves as visual consultant.

WALL-E's expressive range of robotic voices was created by Burtt, whose memorable work includes creating the "voice" of such other legendary robots as R2-D2 (from the "Star Wars" films). Drawing on 30 years of experience as one of the industry's top sound experts, Burtt was involved from the film's earliest stages in creating an entire world of sound for all of the robotic characters and the space craft, as well as all environments.

The original score for "WALL-E" is composed by eight-time Oscar® nominee Thomas Newman, who had previously worked with Stanton on "Finding Nemo." Rock-and-roll legend Peter Gabriel collaborated with Newman on an original song called "Down to Earth." Gabriel wrote the lyrics for this captivating and clever musical epilogue, and performs the song as well.