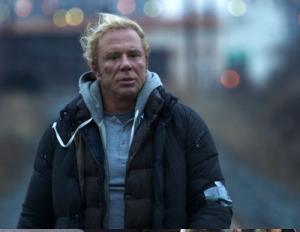 Mickey Rourke plays Randy "The Ram" Robinson is a down-on-his-luck professional wrestler who has little in his life beyond his interaction with his fellow competitors and his occasional visits with Cassidy, a stripper at a local club.

A serious injury in the ring, however, leaves Randy shaken ... and determined to change the lonely course his life has taken.

This is the first Academy Award Oscar nomination for Mickey Rourke.

"The Wrestler" is sincere, violent, sentimental, predictable and extremely effective. Mickey Rourke's a remarkable physical specimen every which way, and he takes some amazing punishment, amazingly choreographed, in the wrestling scenes.

He takes punishment in the more hackneyed off-ring scenes with his daughter, too, but Wood and Rourke treat the material like gold, and damned if their scenes don't work.

One of the best bits has Randy working the deli counter at his supermarket, and the way he banters with the customers ("Whatcha havin', good-lookin'?" Randy asks one shlubby middle-age fellow), you sense a born performer in action.

MICKEY ROURKE (Randy), one of the few true method actors of today and a graduate of New York's Actor's Studio, is this generations' classic working actor. His career has been defined by his performances in 9 1/2 WEEKS, BARFLY, ANGEL HEART, YEAR OF THE DRAGON, POPE OF GREENWICH VILLAGE, DINER, FRANCESCO and Francis Ford Coppola's cult classic RUMBLE FISH.

More recently, Rourke received acclaim for his roles in Robert Rodriguez' ONCE UPON A TIME IN MEXICO and SIN CITY.

Rourke's forthcoming releases include KILLSHOT written by Elmore Leonard and THE INFORMERS directed by Gregor Jordan.