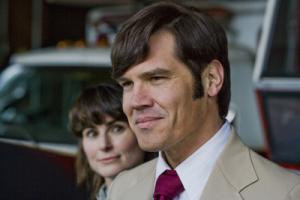 Josh Brolin plays Dan White, the conservative former fireman who is elected to the San Francisco Board of Supervisors at the same time as openly gay politician Harvey Milk.

This is the first Academy Award Oscar nomination for Josh Brolin.

In 1977, Harvey Milk was elected to the San Francisco Board of Supervisors, becoming the first openly gay man to be voted into major public office in America. His victory was not just a victory for gay rights; he forged coalitions across the political spectrum. From senior citizens to union workers, Harvey Milk changed the very nature of what it means to be a fighter for human rights and became, before his untimely death in 1978, a hero for all Americans.

While living in New York City, he turns 40. Looking for more purpose, Milk and his lover Scott Smith (James Franco) relocate to San Francisco, where they found a small business, Castro Camera, in the heart of a working-class neighborhood that was soon to become a haven for gay people from around the country.

Josh Brolin starred as George W. Bush in Oliver Stone’s biopic W. He most recently starred in Joel and Ethan Coen’s No Country for Old Men, which won four Academy Awards including Best Picture and Best Director; and in Ridley Scott’s blockbuster American Gangster. Mr. Brolin was a Screen Actors Guild Award nominee as part of the ensemble for the latter film, and was honored with a Screen Actors Guild Award as part of the winning ensemble for the former.

He is currently producing – with Chris Moore, Anthony Arnove, and Howard Zinn – a documentary entitled The People Speak, based on the latter’s influential 1980 book A People’s History of the United States. The feature looks at America’s struggles with war, class, race, and women’s rights; appearing in the documentary will be Matt Damon, Viggo Mortensen, Sean Penn of Milk, and David Strathairn, among others.

In early 2008, his film directing debut, a short entitled X, which he also wrote and produced, premiered at the Santa Barbara International Film Festival before screening at such festivals as South by Southwest and the AFI Dallas Film Festival. He also directed the behind-the-scenes documentary for the No Country for Old Men DVD.

Mr. Brolin made his mark in television starring in two Western dramas; the epic miniseries Into the West, and the popular series The Young Riders. He has also starred in the series Mister Sterling and Private Eye; in the telefilms Gang in Blue, with the late J.T. Walsh and directed by Mario and Melvin Van Peebles, and Prison for Children, directed by Larry Peerce; and in the telefilm remake of Picnic, directed by Ivan Passer.

He spent five years with actor/director Anthony Zerbe at the Reflections Festival at the GeVa Theatre in Rochester, New York. While there, Mr. Brolin directed and performed in several of the festival’s plays, including Pitz and Joe; Life in the Trees; Forgiving Typhoid Mary; Oh; The Innocents; Peep Hole; Ellen Universe Joins the Band; Lincoln Park Zoo; and Hard Hearts.

His additional stage work includes starring opposite Elias Koteas on Broadway in Sam Shepard's True West; appearing off-Broadway in The Exonerated; The Skin of Our Teeth, The Crucible, and A Streetcar

Named Desire, all at the Kennedy Memorial Theatre; A Midsummer Night’s Dream, at the Lebrero Theatre; and Dark of the Moon, at the Ann Capa Ensemble Theatre.