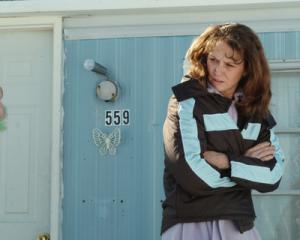 Melissa Leo plays Ray Eddy, an impoverished mother who becomes involved in a smuggling ring in an attempt to avoid losing her home.

Abandoned by her husband, Ray is left to raise their two sons in a broken-down trailer. When her efforts to buy a new home for her boys lead her to the brink of financial ruin, she allows herself to be drawn into a dangerous smuggling ring operating across the U.S.-Canadian border.

Frozen River is set in a real-life smuggling zone on a Native American reservation between New York State and Quebec where the lure of fast money presents a daily challenge to single moms who would otherwise be making minimum wage.

Strapped for money and having been deserted by her husband, working class Ray Eddy (Melissa Leo), reluctantly teams up with Lila (Misty Upham), a widowed Mohawk Indian, to smuggle illegal immigrants across the frozen St. Lawrence River from Canada to the U.S. in the trunk of a Dodge Spirit.

Both women swear each trip will be their last, but one final run across the river leads to a showdown with the law on all sides.

As a working actor for more than 20 years Melissa Leo is most widely known for her genius portrayal of Detective Kay Howard on HOMICIDE: LIFE ON THE STREETS. Leo studied Drama at Mount View Theatre School in London, England and later at the SUNY Purchase Acting Program.

Among her memorable works: THE YOUNG RIDERS, THE “L” WORD, 21 GRAMS, THREE BURIALS OF MELQUIADES ESTRADA and HOLLYWOOD DREAMS.