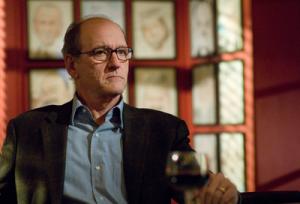 In "The Visitor," Richard Jenkins plays Walter, a lonely widower whose life undergoes a transformation when he finds two illegal immigrants occupying his New York apartment.

This is the first Academy Award Oscar nomination for Richard Jenkins.

In a world of six billion people, it only takes one to change your life. In actor and filmmaker Tom McCarthy's follow-up to his award winning directorial debut The Station Agent, Richard Jenkins ("Six Feet Under") stars as a disillusioned Connecticut economics professor whose life is transformed by a chance encounter in New York City.

Sixty-two-year-old Walter Vale (Jenkins) is sleepwalking through his life. Having lost his passion for teaching and writing, he fills the void by unsuccessfully trying to learn to play classical piano.

When his college sends him to Manhattan to attend a conference, widower Walter Vale arrives at his little-used New York apartment, he is surprised to find two illegal immigrants -- victims of a rent scam -- living there.

Victims of a real estate scam, Tarek (Haaz Sleiman), a Syrian man, and Zainab (Danai Gurira), his Senegalese girlfriend, have nowhere else to go.

Touched by the plight of the outgoing Tarek and his shy girlfriend, Zainab, Walter, in the first of a series of tests of the heart, reluctantly allows the couple to stay with him. A decision that will affect his own life in unexpected ways.

Touched by his kindness, Tarek, a talented musician, insists on teaching the aging academic to play the African drum. The instrument's exuberant rhythms revitalize Walter's faltering spirit and open his eyes to a vibrant world of local jazz clubs and Central Park drum circles. As the friendship between the two men deepens, the differences in culture, age and temperament fall away.

After being stopped by police in the subway, Tarek is arrested as an undocumented citizen and held for deportation. As his situation turns desperate, Walter finds himself compelled to help his new friend with a passion he thought he had long ago lost. When Tarek's beautiful mother Mouna (Hiam Abbass) arrives unexpectedly in search of her son, the professor's personal commitment develops into an unlikely romance.

It's through these newfound connections with three virtual strangers that Walter is awakened to a new world and a new life.

RICHARD JENKINS (Walter Vale) is one of the most in-demand character actors in Hollywood. His memorable performance alongside Ben Stiller in Flirting with Disaster (1996) netted him an Independent Spirit Award nomination for Best Supporting Male. He recently wrapped production on The Broken, a horror film in which he stars opposite Lena Headley, and Burn After Reading, a comedic drama starring George Clooney and directed by the Coen Brothers. He costars in Adam McKay’s Step Brothers, a comedic re-teaming of Will Ferrell and John C. Reilly (Talladega Nights: The Ballad of Ricky Bobby) scheduled for 2008 release.

Prior to his film work, the actor developed a long and distinguished regional theater career, most notably a 15-year stint at Rhode Island's Trinity Repertory Theater, where he served as artistic director for four years. After a small role in the Lawrence Kasdan film Silverado (1985), Jenkins found himself working regularly. Supporting parts in such films as Ken Harrison’s On Valentine’s Day (1986), Hannah And Her Sisters (1986), The Witches of Eastwick (1987), and Sea Of Love (1989) followed. Jenkins spent the early '90s specializing in made-for-TV movies, including HBO’s Emmy® Award winning adaptation of Randy Shilts' bestseller about the discovery of the AIDS virus, “And the Band Played On” (1993).

Later in the decade, Jenkins gained wider appreciation, especially as he indulged his talent for comedy. His appearance as an uptight gay FBI agent who is accidentally drugged was one of the highlights of David O. Russell's Flirting with Disaster (1996). Working again with Ben Stiller, Jenkins appeared as a psychiatrist in There’s Something about Mary (1998), which launched a relationship with directors Peter and Bobby Farrelly. Jenkins also appeared in the Farrelly-produced Outside Providence (1999) and Say It Ain’t So (2001), as well as in the Farrelly-directed Me, Myself And Irene (2000). The actor then shifted over to another pair of movie making brothers to portray the father of Scarlet Johansson's character in Joel and Ethan Coen's noir The Man Who Wasn’t There (2001). That same year, Jenkins appeared in the first season of HBO's “Six Feet Under” as Nathaniel Fisher Sr., the wry funeral home director whom his family members recall as an impenetrable mystery, frugal with his praise and emotions. Most recently, Jenkins has appeared in Intolerable Cruelty (2003), Cheaper By The Dozen (2003), I Heart Huckabees (2004), Shall We Dance (2004), North Country (2005), Fun With Dick And Jane (2005) and Rumor Has It (2005).