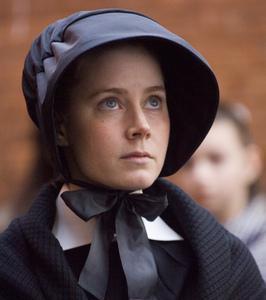 Amy Adams plays Sister James, an inexperienced young nun whose unwitting observations regarding a new priest spark suspicions on the part of the older Sister Aloysius.

Amy Adams was nominated for her supporting role in the movie "Junebug" (2005).

Sister James, played by Amy Adams, is the lamb caught between two wolves, whose suspicion that Father Flynn may have entered into an improper or abusive relationship with a 12-year-old student -- the sole African-American in a sea of Irish and Italians -- provides "Doubt" with its narrative suspense.

Academy Award® nominated actress Amy Adams recently wrapped production on Shawn Levy's Night At The Museum 2: Battle at The Smithsonian starring as Amelia Earhart opposite Ben Stiller. Twentieth Century Fox is scheduled to release the film in May 2009.

Adams will star in Nora Ephron's Julie and Julia opposite Meryl Streep. The Columbia Pictures film is adapted from Julie Powell's book Julie and Julia: 365 Days, 524 Recipes, 1 Tiny Apartment Kitchen. The film is scheduled to be released in August 2009.

Adams will also star in Christine Jeffs and Karen Moncrieff's Sunshine Cleaning opposite Emily Blunt and Alan Arkin. The dark family comedy film is about two lost sisters (Adams, Blunt) who find themselves after starting an unlikely business in crimescene cleanup. Overture Films is scheduled to release the film in March 2009.

She won an Independent Spirit Award, Broadcast Film Critics Association Award, National Society of Film Critics Award, a San Francisco Film Critics Society Award, as well as the Breakthrough Gotham Award. Adams also won the Special Jury Prize for Acting at the 2005 Sundance Film Festival for her role as the pregnant, childlike 'Ashley,' who is awe-struck by the arrival of her glamorous sister-in-law. Adams' other film credits include Adam McKay's Talladega Nights: The Ballad of Ricky Bobby with Will Ferrell, and Steven Spielberg's Catch Me If You Can with Leonardo DiCaprio.