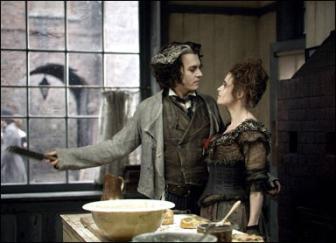 Johnny Depp's other Oscar nominations were for Pirates of the Caribbean: The Curse of the Black Pearl (2003) and Finding Neverland (2004).

The previous effort, "Pirates of the Caribbean: Dead Man's Chest" earned more than $1 billion, making it the third largest grossing movie of all time.

Johnny Depp received a Golden Globe nomination, a British Academy of Film and Television Arts (BAFTA) nomination and a Screen Actors Guild Award for his portrayal of Captain Jack in the first film of the trilogy "Pirates of the Caribbean: The Curse of the Black Pearl."

Depp has earned both critical and popular acclaim for his unique work in a variety of memorable feature films.

Most recently, he collaborated with director Tim Burton for the fourth and fifth times on "Charlie and the Chocolate Factory," for which Depp received a Golden Globe nomination for Best Actor in a Comedy or Musical, and Tim Burton's "Corpse Bride," which received a 2005 Academy AwardÆ nomination for Best Animated Film. Depp portrayed eccentric chocolatier Willy Wonka in "Charlie," which was based on the beloved Roald Dahl classic and opened to impressive critical and box office success worldwide.

For "Corpse Bride," Depp voiced the lead character of Victor Van Dort in the wildly imaginative film, which was one of the year's most celebrated releases. Depp also starred opposite John Malkovich and Samantha Morton in Laurence Dunmore's "The Libertine" as 17th century womanizing poet John Wilmot, the Earl of Rochester.

Johhny Depp's other screen credits include David Koepp's "Secret Window," Robert Rodriguez's "Once Upon a Time in Mexico," Albert and Allen Hughes' "From Hell," Ted Demme's "Blow," Lasse Hallstrom's romantic comedy "Chocolat," Julian Schnabel's "Before Night Falls," Sally Potter's "The Man Who Cried," Tim Burton's "Sleepy Hollow," Roman Polanski's "The Ninth Gate" and Terry Gilliam's "Fear and Loathing in Las Vegas." Hailed as the "Best Actor" of his generation for his performance in Mike Newell's "Donnie Brasco" with Al Pacino, Depp has also starred in Jim Jarmusch's "Dead Man" and in Jeremy Leven's "Don Juan DeMarco," in which he starred as a man convinced he is the world's greatest lover, opposite legendary actors Marlon Brando and Faye Dunaway.

Other films include Lasse Hallstrom's "What's Eating Gilbert Grape," Emir Kusturica's "Arizona Dream" and John Badham's "Nick of Time." Depp began his career as a musician, joining a rock group The Kids, which eventually took him to Los Angeles. When the band broke up, he turned to acting and earned his first major acting job in "Nightmare on Elm Street." He went on to earn roles in several films, including Oliver Stone's Academy AwardÆ-winning "Platoon." Depp then won the role that would prove to be his breakthrough, undercover detective Tom Hanson on the popular Fox television show "21 Jump Street." He starred on the series for four seasons before segueing to the big screen in the lead role of John Waters' "Cry- Baby."

Johnny Depp made his feature directorial debut starring opposite Marlon Brando in "The Brave," a film based on the novel by Gregory McDonald. Depp co-wrote the screenplay with his brother D.P. Depp. 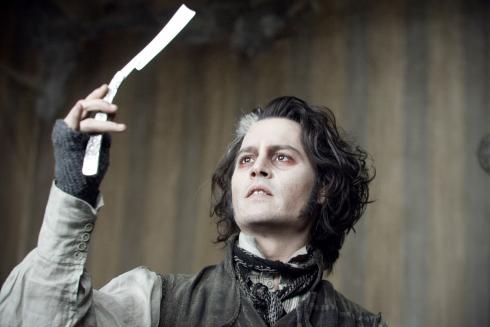 About the Movie "Sweeney Todd The Demon Barber of Fleet Street"

When evil Judge Turpin (Alan Rickman) takes a fancy to his beautiful wife and throws him in prison for a crime he did not commit, London barber Sweeney Todd (Johnny Depp) vows revenge.

Sweeney applies his razor to unlucky customers in his shop, then shuttles the bodies down to his partner-in-crime, Mrs. Lovett (Helena Bonham Carter), who uses the flesh to give her meat pies an extra zing. Though many fall to his blade, Sweeney will not be satisfied until his razor finds Turpin's throat.

From the dark, Gothic imagination of director Tim Burton ("Batman," "Charlie and the Chocolate Factory") and starring Academy AwardÆ and Golden Globe nominee Johnny Depp ("Charlie and the Chocolate Factory," the "Pirates of the Caribbean" trilogy) comes "Sweeney Todd The Demon Barber of Fleet Street," a bloody tale of music, murder, melodrama, meat pies and one man's desperate desire for revenge.

Arriving back in London after escaping from 15 years of false imprisonment in Australia, Benjamin Barker (Johnny Depp) vows to kill the evil Judge Turpin (Alan Rickman) and his nefarious henchman Beadle Bamford (Timothy Spall), who shipped him off to the other side of the world on a trumped-up charge in order to steal his wife, Lucy (Laura Michelle Kelly), and his baby daughter from him.

Adopting the guise of Sweeney Todd, Barker sets up shop in his old Barber Shop above the pie-making premises of Mrs. Nellie Lovett (Helena Bonham Carter), who tells him that his wife poisoned herself after Judge Turpin took advantage of her. But when a rival barber, the flamboyant Italian Pirelli (Sacha Baron Cohen), threatens to expose Sweeney's real identity, Todd kills him by cutting his throat. Not knowing what to do with the body, Mrs. Lovett sees this crisis as a potential solution to her ailing business - and suggests using human flesh as the filling for her pies.

Sweeney discovers that the Judge has turned his amorous affections towards Johanna (Jayne Wisener), Sweeney's now teenaged daughter, who has become Turpin's ward. Imprisoned in his house, Johanna is noticed one day by Anthony (Jamie Campbell Bower), a young sailor who rescued Sweeney from the sea. Hopelessly in love, Anthony vows to rescue Johanna and marry her himself.

Meanwhile, Mrs. Lovett's pies soon become the talk of London, and as business booms, she dreams of respectability and a life at the seaside with Sweeney as her husband and her young charge, Pirelli's former assistant Toby (Edward Sanders), alongside as her adopted son.

But Sweeney has only revenge on his mind - to the detriment of anyone or anything else.

About the Role "Sweeney Todd The Demon Barber of Fleet Street"

"He doesn't say a lot but you know from his eyes that there is something haunting him, that he has a secret, that his past is haunting him, literally haunting him. As the story goes on, we learn what led him to this very dark place. He's just escaped from penal servitude in Australia. He was floating on a raft in the middle of the ocean, trying to make his way to London because he is on a mission of revenge. He wants revenge on the people who essentially destroyed his life."

"Talk about a risk taker. The bigger the risks, the more attractive a role is to Johnny. He's built his whole career on pictures and roles that most actors have turned down or would turn down. He's the master of disguise. He's the master of doing something unique every time out. He has a different look, a different personality, and in this case, he'll have a voice that people will be absolutely astounded by."

Considered to be one of his generation's finest actors, Depp's stock has skyrocketed in recent years thanks to his starring role as Jack Sparrow in "Pirates of the Caribbean: The Curse of the Black Pearl," a global box office smash for which he received an Academy AwardÆ nomination for Best Actor, which was followed by two enormously successful sequels.

"I've always admired Johnny because of his choices as an actor, and because he's always done things according to his own lights," says Bonham Carter. "He's never done anything according to any sort of pattern or formula or to create a career, or because he was relying on his looks. I think, in a funny way, we're a bit similar, in that we don't have much respect for what we look like, we rather like camouflaging and getting away from ourselves."

"They are like any good team with almost an unspoken way of doing things, and can practically read each other's minds," says Zanuck. "Johnny looks to Tim for guidance and Tim looks to Johnny for taking what he has outlined and pushing it a little further. They really love each other and would do anything for each other. It's a deep friendship, and they're both lovely people, fun to work with and hard-working. And they're both at the top of their game. So the combination is wonderful in terms of freshness and inventiveness."

"Every time Johnny and I work together we try to do something different -- and singing for a whole movie is not something we're used to," says Burton. "You never just want to feel like, `Okay, that was easy. What's next?' Johnny and I are always wanting to stretch ourselves, and this was a perfect outlet for that."

For Johhny Depp, the key to Sweeney Todd was to think of him not as a killer but as a victim.

"Sweeney's obviously a dark figure," Depp reflects, "but I think quite a sensitive figure, hyper-sensitive and has experienced something very dark and traumatic in his life, a grave injustice. But I always saw him as a victim. I mean, anyone who is victimized to that degree and then turns around and becomes a murderer, can't be all there. I always saw him as a little bit slow. Not dumb, just a half-step behind. The rug was pulled out from under his perfect life, his perfect world. He was in a 15-year hellhole. The only reason he came back was to eliminate the people who had done him wrong."

"Johnny Depp's performance is quite remarkable," says Sondheim. "Sweeney's desire for revenge and the simmering anger and hurt that he feels carry the story forward, and Johnny finds the most remarkable variety within that narrow set of emotions. The intensity is at a boil all the time and he never drops it. It's real anger."

"He's incapable of feeling happy," says Depp, "unless this corner has been turned and he's that much closer to his objective, which is slaughtering the people who have wronged him."

Sweeney's favored instrument of death are his cutthroat razors, the shiny implements that are also his tools of trade as a barber, and which we learn Mrs. Lovett held on to while Todd was in jail in Australia. "I think it's an indication of how much she loves him because she could have easily sold those razors," says Bonham Carter. "They're worth a lot. But she doesn't. She keeps them. I think she's been holding on to the hope that he might return. His razors are a completion of his self."

Once back in Sweeney's hands, they become both his lifeline and his means of revenge, and he serenades them in the song "My Friends." "These blades are his family," explains Depp. "They're an extension of him, the only love in his life now that his family's gone."

"When Johnny picks up the first razor and holds it, it is a pure moment of love," remarks Logan. "And when he sings to his razors, it's a love song, and he holds them very close. He keeps them in a special sheath, a special holster, the entire movie."

Sweeney's one connection to the real world is Mrs. Lovett, who "is one of the great dramatic creations of 20th century theater," says Logan. "She's a counterpoint to Sweeney, because Sweeney is very grim and brooding and very, very, very serious about what he's doing. Mrs. Lovett brings life and energy and has a sort of twinkle in her eye. Together she and Sweeney are an unstoppable combination."