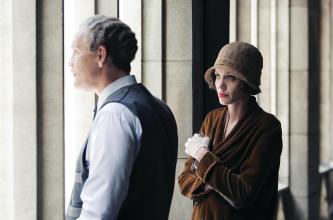 Others may regard them in a less complicated way, but I wonder whether Angelina Jolie ever has mixed feelings about her lips.

They hog the limelight just by being there, daring moviegoers more into tomb-raiding than "A Mighty Heart" not to take her acting talent seriously.

In various, slightly parted poses of defiance or nine kinds of sultriness, the Jolie kisser has been deployed by studio marketing departments every which way.

And with Jolie done up like a melancholy Edward Hopper figure, her eyes downcast, her lips are the visual focal point of the ad campaign for the new Clint Eastwood film, "Changeling," which is a little odd, considering the wrenching subject matter.

The film, based on Southern California's infamous Wineville chicken coop murders of the late 1920s, is a good, solid addition to the 78-year-old Eastwood's directorial career. From a forlorn young boy's doom-tinged farewell to his mother near the beginning, to the precise moment (on the "Silent Night" lyric "mother and child") a heinous predator dies on the scaffold near the end, Eastwood, working from a script by J. Michael Straczynski, tells a painful true story neatly and well, with one foot in rousing Hollywood melodrama and the other in a story that resists tidy resolution.

In 1928, Walter Collins, 9, disappeared from the Los Angeles-area home he shared with his mother, Christine. Five months later, another boy claiming to be the son of Christine Collins was reunited with his doubting mother in a highly public way by the Los Angeles Police Department. Collins said bunk: The boy is someone else's.

The police, ruled with murderous impunity by Chief James E. "Two Guns" Davis, were not interested in any more bad publicity and summarily tossed Collins in the psychiatric ward of the county hospital under a Code 12 violation. Feminine hysteria was the crime, in so many words. Only the newfound boy's admission of guilt freed her (it plays out somewhat differently in the film). The facts are cloudy, but Walter Collins' abductor appears to have been Gordon Northcott, whose Riverside County ranch held the remains of various missing persons.

It's grim stuff, and "Changeling" elides the worst of it, perhaps to give the audience a break (what's left out of the script relates to sexual molestation, as well as the involvement of Northcott's mother), perhaps to avoid comparisons with Eastwood's "Mystic River." The script emphasizes the triumph of one woman's campaign against the law-enforcement officials who shut her away in hopes of shutting her up. Jolie, rail-thin, plays Collins as a feral crusader for justice. In a largely expository role, John Malkovich portrays the Rev. Gustav Briegleb, Collins' partner in exposing the venality of the local police.

Jolie brings out the best in the script and transcends its limitations. She's spectacularly effective in the most intense blowouts -- there's an Oscar-clip dilly with Jolie and Jason Butler Harner, who plays Northcott -- but Jolie really shines in the calm before the storm, the scenes (and there are many) when one patronizing male authority figure after another belittles her at their peril.

"Changeling" comes to dramatic life most vividly in the hushed scenes, notably the ones dominated by Michael Kelly's Detective Lester Ybarra. He's one of the few characters who undergo a marked change, starting out as just another LAPD flatfoot, slowly pulled into the vortex of evil represented by Northcott. Kelly's long interrogation scene with a runaway (Eddie Alderson) who has survived his waking nightmare is a high point of dramatic purpose. You almost wish Eastwood hadn't felt the need to intercut it with Gothic horror flashbacks.

I found "Changeling" consistently involving, though a touch deliberate (it runs 141 minutes) and psychologically thin. Where it lands on your Eastwood list depends on how highly you regard him as a craftsman. For my money, Eastwood's most interesting recent work lies with "Letters From Iwo Jima," most of "Unforgiven" and "The Bridges of Madison County" and parts of "A Perfect World." If you're an ardent admirer of "Million Dollar Baby," we'll have to agree to disagree. In "Changeling," certain atmospheric details feel less than judicious, and unlike some of my colleagues, I don't pin the problems on the quality of the production design. Rather, it's cinematographer Tom Stern's unusually blunt and flat lighting (heavy on the cold, milky slashes of white cutting up dark interior spaces) and Eastwood's direction that feel a little heavy-handed. And Eastwood's musical score, more '40s-sounding than '20s or early '30s, hinges on a theme that shamelessly repurposes the first five notes of "I Wish You Love."

Does any of this matter to the average filmgoer who just wants to know whether this combination of serial-killer saga and triumph of the human spirit is any damn good? No, and yes. "Changeling" fundamentally works; it holds you. But these issues of texture and detail matter too, and they hold clues as to why Eastwood's latest is a good, solid achievement rather than a great, grieving one.

MPAA rating: R (for some violent and disturbing content and language).

About the Movie "Changeling"

Mrs. Collins told her story clearly, stating that from the first she was convinced the boy was not her missing son . . .

She was subjected to an exhaustive examination by President Schweitzer, who wound up asking her what happened shortly before she was taken to the County Hospital.

"I was requested to appear before Captain Jones," she said.

"In the presence of several others, he said: ‘What are you trying to do, make a lot of fools out of us all? Are you trying to shirk your duty as a mother and have the State provide for your son? You are just a fool.’"

Clint Eastwood directs Angelina Jolie and John Malkovich in a provocative thriller based on actual events: Changeling. In the film, Christine Collins' (Jolie) prayers are met when her kidnapped son is returned. But amidst the frenzy of the photo-op reunion, she realizes this child is not hers. Facing corrupt police and a skeptical public, she desperately hunts for answers, only to be confronted by a truth that will change her forever.

Changeling tells the story of one woman whose invincible spirit and refusal to surrender brought down a corrupt police department and ushered in a new era of dignity and equality under the law.

Los Angeles, March 1928: On a beautiful Saturday morning in a working-class suburb, single mother Christine Collins (Oscar® winner Angelina Jolie) says goodbye to her nine-year-old son, Walter, and leaves for her job as a telephone operator. But when Christine returns to their modest home, she is confronted with every parent’s worst nightmare: her son has vanished.

An exhaustive and fruitless search ensues, but Walter has disappeared without a trace . . . until five months later, when a child—claiming to be her boy—is returned by police who are eager to bask in the public-relations coup of reuniting mother and child. Dazed by the swirl of cops, reporters, photographers and her own conflicted emotions, Christine is persuaded to take the boy home. But in her heart, she knows he is not Walter.

As she pushes authorities to keep looking for her real son, Christine learns that in Prohibition-era L.A., women don’t challenge the system and live to tell their story. Slandered as delusional and unfit, she finds an ally in community activist Reverend Gustav Briegleb (John Malkovich), who helps her fight the city to look for her missing boy.

Facing corrupt police who question her sanity and a skeptical public hungry for a fairy-tale ending, Christine desperately hunts for answers. As she searches, she becomes an unlikely heroine for the poor and downtrodden who have been systematically abused and swept aside by the police state that has gripped L.A. Now, one woman’s quest won’t stop until she finds her son…unless those assigned to protect and serve silence her for good.

About the Cast "Changeling"

Jolie was heard as the voice of Master Tigress in DreamWorks’ Kung Fu Panda, opposite Jack Black, and was recently seen in the fantasy-thriller "Wanted", for Timur Bekmambetov. Upcoming films include the long-awaited adaptation of Ayn Rand’s seminal novel “Atlas Shrugged.”

JOHN MALKOVICH (Reverend Gustav Briegleb) is one of the most compelling presences in cinema, having with a 20-year body of work marked with acclaimed performances in thought-provoking independents, as well as mainstream movies. As a guiding member of Chicago’s landmark Steppenwolf Theatre Company, Malkovich as a producer, director and actor has had a profound impact on the American theater landscape. That same spirit of innovation found in Steppenwolf informs Malkovich’s production company, Mr. Mudd, which is the creative force behind some of the most intriguing films of the past 10 years, including Ghost World and Juno.

Malkovich remains of the one the busiest actors in Hollywood, with a diverse line-up of projects that will soon make their way to theaters. First up is the Coen brothers’ comedy Burn After Reading, in which Malkovich is part of a stellar ensemble featuring Brad Pitt, George Clooney, Frances McDormand and Tilda Swinton. The film, which makes its premiere at the 2008 Venice Film Festival, tells the story of what happens when the private memoir of a CIA agent ends up in the hands of an unscrupulous duo that attempts to sell it. The film premieres in the U.S. on September 12, 2008.

Renowned for his versatility and striking presence, Donovan has made a name for himself through memorable performances on both stage and screen. Last year, he was seen on the big screen as a captivating leading man in the Joey Lauren Adams film Come Early Morning. Written and directed by Adams, the film premiered at the 2006 Sundance Film Festival. Donovan received high praise for his performance as Cal, the romantic lead opposite Ashley Judd. The Roadside Attractions film also stars Laura Prepon.

Donovan also starred as Clay Driscoll in the independent film Believe in Me, an adaptation of the young-adult novel “Brief Garland,” by Harold Keith. Directed by Robert Collector, the film follows the story of Driscoll, a high-school girl’s basketball coach in the 1960s who becomes inspired by his young team and who, in turn, inspires them toward greatness. The film also stars Bruce Dern, Samantha Mathis and Heather Matarazzo.

COLM FEORE (Chief James E. Davis) is a veteran talent with a distinguished catalogue of work. Feore’s talent crosses many borders: an international success story, he acts in both English and French and has conquered many mediums, with starring roles in film, in television and on stage. Feore co-starred in the hit film Bon Cop, Bad Cop, the highest-grossing Canadian film of all time.

JASON BUTLER HARNER (Gordon Northcott) is a relatively new face to film, having been seen in Universal Pictures’ The Good Shepherd, which starred Angelina Jolie and Matt Damon. He appeared most recently in the HBO miniseries John Adams, opposite Paul Giamatti, and in the action film Next, opposite Nicolas Cage and Julianne Moore. Upcoming projects include the independent film New Orleans, Mon Amour, directed by Michael Almereyda and starring Christopher Eccleston, as well as Tony Scott’s remake of The Taking of Pelham One Two Three, which is based on Morton Freedgood’s thriller novel and stars John Travolta and Denzel Washington.

Academy Award® nominee AMY RYAN (Carol Dexter) has made her mark by working with some of today’s top directors and talent in the industry. Between many high-profile stage projects and television roles such as in HBO’s The Wire, Ryan is still just getting started.

With an expansive list of film and television credits spanning over 10 years, MICHAEL KELLY (Detective Lester Ybarra) stars in the much-anticipated upcoming HBO miniseries Generation Kill, premiering this July, which chronicles one U.S. marine’s journey in the American-led assault on Baghdad in 2003. Kelly will also be seen in the feature film The Narrows, directed by François Velle, later this year.