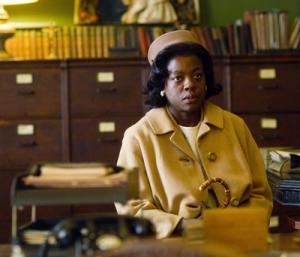 When Sister Aloysius (Meryl Streep) suspects that Father Flynn may be taking an excessive interest in the school's first African-American student, she responds with a headstrong determination that is either a necessary defense of an abused boy or a heedless condemnation of an innocent man.

In the film "Doubt", Viola Davis plays Mrs. Miller, an African-American woman who learns from Sister Aloysius that her son may be the victim of abuse by a priest at his school.

As Mrs. Miller, Viola Davis appears in "Doubt" for only one scene.

However, the extensive scene opposite Meryl Streep's suspicious Sister Aloysius is memorable for both its drama and its subtlety.

Viola Davis made an indelible impression on the screen with her heart-wrenching performance in Denzel Washington’s Antwone Fisher, which earned her an Independent Spirit Award nomination.

Immediately upon wrapping production on Doubt, Davis began production on State of Play, with Russell Crowe and Rachael McAdams. The film, directed by Kevin Macdonald (The Last King of Scotland), will be released in April 2009. Davis had a supporting role in the thriller Disturbia starring Shia LeBeouf for director D.J. Caruso. Additional film credits include Far From Heaven with Dennis Quaid and Julianne Moore, and Solaris, Traffic and Out of Sight.

In 2001, Davis earned rave reviews for her performance in August Wilson’s “King Hedley II,” directed by Marion McClinton. She went on to win the Tony Award that year for Best Featured Actress.

In 2004, Davis lit up the stage in the Roundabout Theatre Company’s production

of Lynn Nottage’s play, “Intimate Apparel,” directed by Tony Award-winning director Daniel Sullivan. She garnered the highest honors for an off-Broadway play, including Best Actress awards from the Drama Desk, the Drama League, the Obie and the Audelco Award. Davis was nominated for the Lucille Lortel Award as well. She reprised her role at the Mark Taper Forum in Los Angeles where she was recognized with the Ovation, Los Angeles Drama Critics and the Garland Awards.

Davis is a graduate of The Juilliard School and holds an Honorary Doctorate of Fine Arts Degree from her alma mater, Rhode Island College. Davis resides in Los Angeles with her husband, actor Julius Tennon.