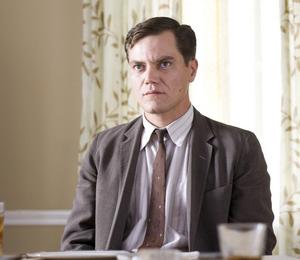 Michael Shannon plays John Givings in "Revolutionary Road", a young man confined to a mental institution whose dinner with his parents' friends unleashes his relentless propensity for telling the truth.

The film version of the 1961 Richard Yates novel, "Revolutionary Road is a portrait of a mid-1950s marriage built on sticks, straw and delusion. Frank and April Wheeler live a life of suburban plenty that seems on its surface to represent the essence of the post-World War II American dream.

In reality, however, the pair are haunted by the thought that they have betrayed their dreams and are trapped in a conventional lifestyle that falls short of the bohemian existence they had imagined for themselves.

Michael Shannon plays the addled, electro-shocked son of the local real estate agent (Kathy Bates), and he's marvelous in a role -- a schematic role, to be sure -- that feels like a refugee from an Edward Albee play. He is the truth-teller, upsetting the suburban apple cart.

Shannon's wit and off-kilter intimidation tactics are put to exemplary use.

And then, following Shannon's second scene, the film slips into a methodical, slightly heavy rhythm, not helped by composer Thomas Newman's infernal recycling of a six-note piano theme that's enough to drive even the most ardent suburbanite out of town and into a loft somewhere.

MICHAEL SHANNON (John Givings) grew up in Lexington, Kentucky, and began his professional stage career in Chicago. His first acting role was in Winterset at the Illinois Theatre Center. Over the next several years, he continued working on the stage with such companies as Steppenwolf, The Next Lab and A Red Orchid Theatre. He subsequently relocated to London for a year, and performed on stage in London’s West End in such productions as “Woyzeck,” “Killer Joe” and “Bug.”

While in Chicago, Shannon also kept busy in front of movie and television cameras, most notably in William Friedkin’s BUG and Oliver Stone’s WORLD TRADE CENTER. KANGAROO JACK (2003) marked the third Jerry Bruckheimer production in which Shannon has appeared. He also appeared in BAD BOYS II (2003), directed by Michael Bay and starring Will Smith and Martin Lawrence, and in GRAND THEFT PARSONS (2003), with Johnny Knoxville and Christina Applegate.

He has most recently been seen in SHOTGUN STORIES, in Sidney Lumet’s BEFORE THE DEVIL KNOWS YOU’RE DEAD alongside Philip Seymour Hoffman, Albert Finney and Ethan Hawke and in Curtin Hanson’s LUCKY YOU. His latest films include Noah Buschel’s THE MISSING PERSON, Oliver Stone ’s controversial W and THE GREATEST with Susan Sarandon and Pierce Brosnan. Finally, Michael will be working with Werner Herzog on the remake of THE BAD LT. before reuniting with the New York director of “Bug” for the New York production of “Lady.”

His many other credits include THE WOODSMAN, PEARL HARBOR, VANILLA SKY, 8 MILE, HIGH CRIMES, CECIL B. DEMENTED, TIGERLAND and CHICAGO CAB, an adaptation of the long-running play, “Hellcab.”