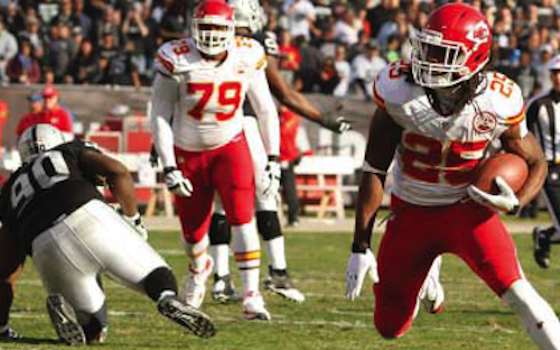 Chiefs Running back Jamaal Charles, Dolphins safety Michael Thomas and Ravens kicker Justin Tucker are the AFC Players of the Week for games played the 15th week of the NFL 2013 season

Charles became the first player in NFL history with at least four touchdown receptions and one touchdown run in a single game.

His five total touchdowns are tied for the fourth-most in a game in league history and just one shy of the record. Three players scored six touchdowns in a game: ERNIE NEVERS (November 28, 1929), DUB JONES (November 25, 1951) and GALE SAYERS (December 12, 1965).

Charles' 195 receiving yards were the fifth-most by a running back in NFL history.

In his sixth season from Texas, this is Charles' third career Offensive Player of the Week award. He most recently won the award in 2012 (Week 3).

Charles is the first running back this season to win AFC Offensive Player of the Week honors.

In his NFL debut, Thomas registered two tackles, one interception and two passes defensed in the Dolphins' 24-20 win over New England.

Thomas, who was signed by Miami on December 10 from San Francisco's practice squad, played a pivotal role in helping the Dolphins defeat New England for the first time since December 6, 2009 (seven consecutive losses).

He was originally signed by San Francisco as an undrafted free agent on May 2, 2012.

This is the third time a Dolphins player has won Defensive Player of the Week honors this season (CAMERON WAKE, Week 9; OLIVIER VERNON, Week 13).

Tucker converted all six field-goals, including a game-winning 61-yarder in the Ravens' 18-16 win at Detroit on Monday Night Football.

He scored all 18 of the Ravens' points in the game.

Tucker has made 33 consecutive field goals, the longest active streak in the NFL.

Through Week 15, Tucker has converted an NFL-best 35 field goals.

In his second season from Texas, this is Tucker's third career Special Teams Player of the Week Award (all in 2013). He previously won the award in Week 12 and Week 10.

Other nominees for AFC Offensive Player of Week 15 as submitted by AFC clubs:

New England wide receiver JULIAN EDELMAN, who had 13 receptions for 139 receiving yards (10.7 average) with one touchdown in the Patriots' 24-20 loss at Miami.

Tennessee quarterback RYAN FITZPATRICK, who completed 36 of 58 passes (62.1 percent) for 402 yards with four touchdowns versus two interceptions and a 91.3 passer rating in the Titans' 37-34 overtime loss to Arizona.

Indianapolis running back TRENT RICHARDSON, who totaled 102 scrimmage yards (64 rushing, 38 receiving), including a nine-yard touchdown reception in the Colts' 25-3 win over Houston.

Kansas City quarterback ALEX SMITH, who completed 17 of 20 passes (85 percent) for 287 yards with five touchdowns versus zero interceptions and a 158.3 passer rating.

Miami quarterback RYAN TANNEHILL, who completed 25 of 37 passes (67.6 percent) for 312 yards with three touchdowns versus zero interceptions and a 120.6 passer rating.

Other nominees for AFC Defensive Player of Week 15 as submitted by AFC clubs:

Baltimore rookie safety MATT ELAM, who had a team-high 10 tackles, one tackle for a loss, one pass defensed and one interception.

Cleveland safety TASHAUN GIPSON, who recorded a career-high two interceptions, including a 44-yard interception-return touchdown in the Browns' 38-31 loss to Chicago.

Indianapolis linebacker ROBERT MATHIS, who had four tackles, one sack and forced a fumble.

Other nominees for AFC Special Teams Player of Week 15 as submitted by AFC clubs:

Pittsburgh wide receiver ANTONIO BROWN, who returned two punts for 78 yards (39 average), including a 67-yard PR-TD in the Steelers' 30-20 win over Cincinnati.