Will Israel 'Bounce the Rubble' in Gaza? 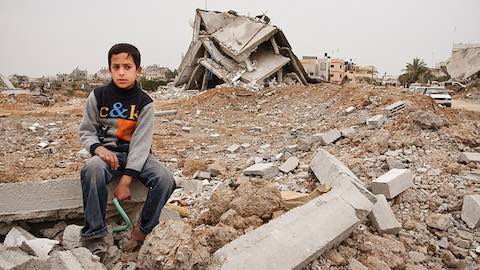 Will Israel 'Bounce the Rubble' in Gaza?

Not much for the IDF left to bomb in Gaza. (Photo: Andlun 1 / Flickr Commons)

'Rubbing salt in the wound' scarcely does justice to the effects another Israeli attack would have on a place as ruined as Gaza.

Winston Churchill said: "If you go on with this nuclear arms race, all you are going to do is make the rubble bounce." By which he apparently meant that nuclear war would devastate everyone and everything so completely that, after a while, a blighted landscape itself is being bombed.

In an article in Foreign Policy titled Gaza Is a Tomb, Bel Trew provides us with a poignant image of homes bombed by the IDF (Israel Defense Forces):

People paint their names and phone numbers onto the concrete heaps, in case an aid agency bothers to turn up and start the reconstruction efforts.

Eight months after the bombing ended, Gaza is still flattened: Only $945 million of $3.5 billion pledged for rebuilding Gaza at an October conference in Cairo has been received ... while not a single one of the 19,000 homes destroyed in the conflict has been rebuilt. ... an estimated 100,000 people are still homeless, with almost 1,300 camping in U.N. schools.

... fighters in Gaza are preparing for a new war every day. ... Israeli planes and drones have been increasingly circling the 26-square-mile coastal enclave. The Israel Defense Forces have repositioned troops at the eastern borders, an area almost entirely flattened during last summer's 51-day war.

Gaza today is a powder keg waiting to explode. The key aspects of the cease-fire agreement that ended the war last summer remain unfulfilled -- both Israel and Hamas feel that only more violence can force their enemy to assent to their demands.

If Israel were to launch another large-scale attack on Gaza, it would be like -- take your pick of clichés -- adding insult to injury, rubbing salt in a wound, or bouncing the rubbles. Just mutilating the dead body of someone that you have killed, there's a ghoulish quality to bombing a region that you have already bombed to oblivion.

"Will Israel 'Bounce the Rubble' in Gaza?"