A Fateful Triangle: the United States, Iran, and Saudi Arabia in Yemen 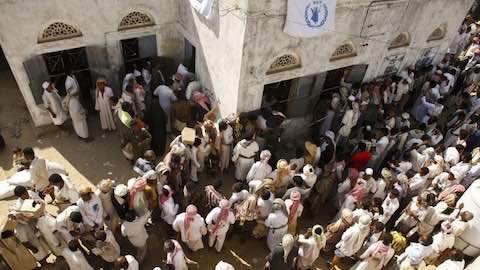 A Fateful Triangle: the United States, Iran, and Saudi Arabia in Yemen

What have been the main consequences of the Saudi-led air campaign against Yemen's Houthi rebels? Asbed Kotchikian thinks they include 1) the return of AQAP to its former strongholds; 2) an obvious uptick in Saudi-Iranian tensions; and 3) the addition of yet another layer of complexity to the United States' relations with Tehran.

A Saudi Arabian-led coalition of predominantly Arab countries launched airstrikes against targets in Yemen. The attacks were requested by the country’s president Abd Rabbuh Mansur Hadi in response to the Houthi rebels’ advance on the capital Sana’a and the port city of Aden. Yet, instead of having the desired effect of restoring a degree of security to the region’s poorest country, the airstrikes have aided the reemergence of al-Qaida in the Arabian Peninsula (AQAP). This unwelcome development has undoubtedly provided the United States with an unwanted strategic headache, particularly when it comes to finally resolving the Iranian nuclear crisis. It might also add another dynamic to the fight against the so-called Islamic State (IS) in Iraq and Syria.

The rise and fall (and rise again) of AQAP

AQAP was formed in 2009 following the weakening of its parent organization in Afghanistan and Pakistan and the merger of its Saudi and Yemeni branches. Indeed, this union was also the result of Saudi Arabia’s successful suppression of al-Qaida inside the Kingdom. The newly-formed group was soon added to the US Department of State’s list of Foreign Terrorist Organizations (FTO) and on the receiving end of sustained unmanned airstrikes. Encouraged by the political changes brought about by the Arab Spring, thousands of Yemenis took to the streets in 2011 to protest against Ali Abdullah Saleh’s 33 years in power. With the country on the brink of all-out civil war, AQAP managed to take over vast areas of southern Yemen, only to be pushed back by the country’s military following the battle of Zinjibar (2012).

Over the next few years, AQAP’s activities were limited to local attacks and suicide bombings against government buildings. Following its military defeat, the group even rebranded itself as Jama’at Ansar al-Shari’a (a name that’s still interchangeably used by AQAP) as part of its bid to find new sources of material and moral support. Irrespective of name changes, the group and its senior figures remained in the crosshairs of the United States. Its leader, Nasser al-Wuhayshi, is still the subject of a $10 million reward for his arrest, making him as valuable a target as Abu Bakr al-Baghdadi, the leader of Islamic State (IS).

It’s not known whether al-Wuhayshi’s tight grip on the levers of power helped AQAP to pull through its ‘wilderness years’ or to attract new followers. In 2013, the US State Department estimated that the organization consisted of 1000 active personnel. However, the recent attacks on the Paris-based satirical newspaper Charlie Hebdo might have boosted AQAP’s numbers by at least 200 and added credibility to suggestions that the organization’s ‘rehabilitation’ is now complete. As events unfolded in the French capital, it became clear that two of the perpetrators – brothers Sherif and Saiid Kouachi – had been trained by AQAP operatives in Yemen. This was eventually followed by a statement in which AQAP claimed full responsibility for the attacks.

The view from Riyadh

To compound matters, the Saudi-led attacks against Houthi rebels have failed to put a brake on AQAP’s reemergence as a major force in the Arabian Peninsula. During the opening week of the air campaign the group even managed to reassert itself over its former strongholds in Hardamawt province. Moreover, the April 2 prison break in the city of Mukalla was swiftly followed by the occupation of an airport and two military bases. As a result, AQAP is currently thought to be in control of almost 50% of Hardamawt and Al Jawf provinces. AQAP’s recent successes might also have paved the way for the Islamic State’s entrance into the Yemen crisis. On April 25, the group released a video claiming that it had established a presence inside the country. This was followed by claims that IS operatives were responsible for two suicide attacks on mosques in Sana’a which killed 137 people, mostly from the Zaidi/Houthi community.

Saudi Arabia remains relatively quiet about the growing presence of AQAP and IS inside Yemen. The Kingdom’s one concession to international opinion has been to acknowledge that creating a stable and secure Yemen offers the best chance of blunting their influence. Indeed, it might well be the case that this is as good as it gets from Riyadh for now. Saudi Arabia’s heavily populated southern border sits on top of the Houthi stronghold of northeastern Yemen. With this firmly in mind, the Kingdom remains determined to prevent this regional conflict from spilling over onto its territory.

Of even greater concern is the conflict’s potential to further alter the regional balance of power between Saudi Arabia and Iran. From the latest round of negotiations with the P5+1 to Tehran’s support for the fight against the IS insurgency in Iraq, the Kingdom is growing increasingly worried about Iran’s perceived encroachment into its strategic backyard. Such concerns have gathered momentum since 2011, following Tehran’s support for Shia opposition protests in Bahrain, a development that prompted Saudi Arabia to support its Sunni ally by sending troops to the island-state.

Like most of Bahrain’s population, Yemen’s Houthis also adhere to the Shia branch of Islam. This has raised concerns in Sana’a and Riyadh that Iran is providing support to a group that it has clear religious affiliations with – a claim that’s vehemently denied by the Houthis and Tehran. According to Yemeni and Saudi sources, Iranian assistance has come in the form of financial support, military training in Lebanon (via Hezbollah and Iranian instructors) and arms transfers. Indeed, Yemeni officials cite the last form of assistance as the main reason for the Houthis’ successful occupation of Sana’a in April 2015.

Despite having a strategic interest in Yemen that predates the ‘war on terror’, the United States made a relatively modest contribution to the Saudi-led air campaign against the Houthis, with support limited to logistics, intelligence and target identification. At the same time, Washington has continued its unmanned airstrikes against AQAP targets. Reports suggest that the US recently killed Nasser al-Ansi, one of AQAP’s leading figures and the alleged mastermind of the Charlie Hebdo attacks. However, Washington’s limited support for its longstanding Middle Eastern ally has come at a cost. President Hadi’s tenuous grip on power means that the United States still does not have any credible partners inside Yemen that can keep AQAP in check on the ground. And while the Houthi themselves are vehemently opposed to AQAP, their anti-American rhetoric and alleged connections with Iran automatically disqualifies them as a partner of choice.

The second major challenge that Saudi airstrikes have created for the US is to add yet another layer of complexity to Washington’s relations with Iran. On April 2, Tehran and the P5+1 reached a tentative agreement on the future status of Iran’s nuclear program. In return for a major reduction in Iran’s abilities to develop nuclear weapons, the P5+1 will waive banking and oil sanctions against Tehran and ease UN Security Council resolutions on proliferation-related activities. Dialogue has also been accompanied by something like a mini-revival in US-Iranian relations, as evidenced by Washington’s decision to allow the Iranian Interests Section new office space and vice versa. However, talk of a full-blown détente remains wide of the mark, especially when the recent stand-off between American and Iranian naval vessels off the Yemeni coast is taken into account. Indeed, the current state of US-Iranian relations might be better viewed through Cold War lenses, given their respective ‘proxy’ support for Saudi Arabia’s bombing campaign and Yemen’s Houthi rebels.

The ‘temporary’ ceasefire agreement reached on May 13 at least gives all the interested parties in the Yemen conflict time to evaluate the effectiveness of their strategies and counter-responses. Such evaluations will undoubtedly make for grim reading in Washington and Riyadh. The Houthi advance has stood its ground in the face of ineffective Saudi airstrikes and there is no sign of President Hadi reassuming full control of the country. In keeping with developments in Iraq and Syria, negotiations involving all the parties to the Yemen conflict remain a far-fetched fantasy, to say the least. For the time being, the best that this war-ravaged country can hope for is some much-needed humanitarian aid – before the next round of conflict gets under way.

It remains to be seen whether the United States will provide increased support for another wave of Saudi attacks on Houthi positions. Doing so might put further pressure on Washington’s efforts to keep the spread of Islamist extremism in Iraq and Syria in check and cancel out progress made by the P5+1 concerning Iran’s nuclear program. Consequently, Tehran’s ‘hidden’ influence on the Yemen crisis remains intact – much to the chagrin of Saudi Arabia. Worse still, Yemen remains a failed state and fertile breeding ground for AQAP, IS and all of the problems that this presents for the Middle East and beyond.

Asbed Kotchikian is a lecturer at the Global Studies Department at Bentley University specializing in the politics of identity, foreign policy as well as political processes in the South Caucasus and the Middle East.

"A Fateful Triangle: the United States, Iran, and Saudi Arabia in Yemen"