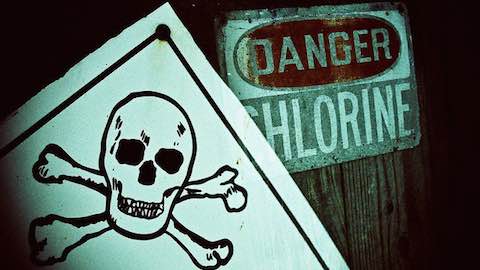 By both withholding and using chlorine, Syrian President Assad has wrought yet more death and destruction on his people. (Photo: Cameron Russell / Flickr Commons)

Except that in Syrian President Bashar al-Assad's world both sides of the sword are death dealing.

In an article for the New York Review of Books titled Syria: Death from Assad's Chlorine, Annie Sparrow begins by citing the tremendous boon to private and public health that the element chlorine has been over the last couple of centuries.

Today 90 percent of water sources in the United States and Europe rely on chlorine for safe water. This is still the most important use of chlorine, and yet so commonplace that we have forgotten its vital role in human well-being….

Beyond public health, chlorine is fundamental to modern medicine. Chlorine compounds form the building blocks for 90 percent of modern drugs.

Then Ms. Sparrow shows what happens when chlorine is withheld. In Syria

… chlorine was routinely used for safe water, sanitation, and the manufacture of medicines for both domestic consumption and export. But for several years before the beginning of the popular uprising in March 2011, and in part contributing to it, the Syrian government denied many public health measures to areas of the country that were politically unsympathetic to it, selectively withholding not only chlorine for treatment of water contaminated by sewage, but also routine childhood vaccinations. That continues today, with widespread denial of chlorine to Deir Ezzor, Raqqa, Daraa, the outskirts of Damascus, and other areas outside government control….

In Deir Ezzor, untreated tap water comes directly from the Euphrates River, two hundred yards downstream from a sewage pipe. As a result, there were more than 30,000 cases of hepatitis A across the country in 2014, with several fatalities in young children.

Cholera, too, has reared its ugly head. Now, recall that the

…. chemical massacre in eastern Ghouta in August 2013, which used missiles loaded with sarin, killed some 1,400 civilians. In a deal negotiated by Washington and Moscow under the threat of military retaliation, the Syrian government was forced to give up a sizable part of its chemical arsenal, including 581 tons of the precursors of sarin and twenty tons of ready-to-use sulfur mustard.

However, because chlorine has legitimate uses, the government was not required to eliminate its chlorine stockpiles.

A lightbulb goes off in the head of Assad or someone on his staff.

Having made civilians in opposition-held areas suffer from the lack of chlorine, the Syrian government is now, in a cruel irony, making it suffer from too much chlorine--in the form of chemical weapons….

If chlorine is not heavily diluted, inhaling it in its gaseous form causes choking and can be fatal. According to the UN Human Rights Council's Commission of Inquiry for Syria and an Organization for the Prohibition of Chemical Weapons (OPCW) report of September 10, 2014, chlorine was repeatedly used in this way as a weapon in the Syrian villages of Talmenes, Al Tamanah, and Kafr Zita in April 2014.

… In April 2014 alone, there were ten attacks in which chlorine was dropped on civilians in villages in northern Syria, killing eight and affecting almost nine hundred. All but one of the attacks occurred at night and involved the aerial dropping of barrels of compressed chlorine gas, which spread when they hit their target.

For its part, the Islamic State, by setting the benchmark for evil so high (over 2,000 non-combat deaths, including by stoning and beheading, since last June), allows Assad cover to be brutal on his own. Though responsible for many more deaths, Assad, because he confines his atrocities to his country and has no illusions about conquering as the Islamic State does, is the alternative preferred by the West in the region.

The Syrian Army has suffered a string of defeats from re-energized insurgents and is struggling to replenish its ranks as even pro-government families increasingly refuse to send sons to poorly defended units on the front lines. These developments raise newly urgent questions about the durability of President Bashar al-Assad's rule.

"The trend lines for Assad are bad and getting worse," said a senior United States official in Washington, who, speaking on the condition of anonymity to discuss confidential intelligence assessments, nevertheless cautioned that things had not yet reached "a boiling point."