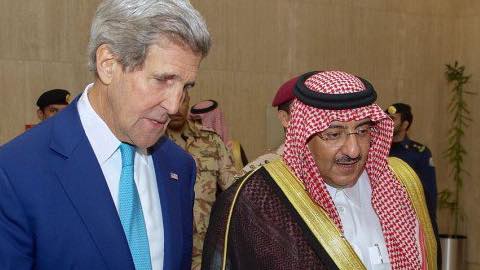 Saudi Arabia's perceived need to keep Iran at bay is distracting it from the danger that the Islamic State poses to its regime.

Recently in Politico magazine, Gary Sick wrote about what he calls the "most dramatic shift in Saudi policy since at least World War II." To wit:

The Saudi regime's insistence on seeing threats to the Kingdom in fundamentally sectarian terms--Sunni vs. Shia--will put it increasingly at odds with its American patrons and could lead the Middle East into a conflict comparable to Europe's Thirty Years War, a continent-wide civil war over religion that decimated an entire culture.

It's not a conflict with the United States and the West driving the change, but "fear of Iranian regional hegemony." It seems the U.S. invasion of Iraq made Iran "almost overnight the most influential state in the Persian Gulf." Sick wrote:

… the US installation of a Shia government in Iraq also gave credence to the notion of an ongoing Iranian takeover of the Middle East and to the explanation of much of the turmoil that followed as a sectarian war inflamed by Iran. This perception has likely fed into Saudi Arabia's momentous strategic reassessment.

Besides which "President Obama is in the process of replacing the policy of containment with a policy of limited engagement with Iran." Most notably through the nuclear deal toward which both countries seem to be working. It seems that:

For many decades, Saudi Arabia had played the classic role of a weak state with a single compelling resource--oil money. It cultivated powerful protectors and used its influence behind the scenes to promote outcomes that it could not hope to produce on its own.

The objective of the Saudi campaign seems to be to show strength against Iran wherever its hand appears, even if that hand's actual influence is unclear.

But, "Sadly, and perhaps predictably, the most significant accomplishment of weeks of bombing has been the destruction of civilian infrastructure, the deaths of many innocent people, and the creation of a massive humanitarian crisis in one of the poorest countries in the world."

Not to mention blowback on Saudi Arabia and the ruling House of Saud.

Already this attempt to counter a perceived Iranian threat has come at a cost to Saudi Arabia's security, strengthening its enemy Al Qaeda in the Arabian Peninsula (AQAP). With US counterinsurgency operations against AQAP having waned amid the chaos in Yemen, the Houthis are the main bulwark against AQAP.

Finally, writes Sick, "Saudi Arabia's decision to place the political threat from Iran above the actual military and ideological threat from radical Sunni Islamism is questionable at best."

Both Al Qaeda and the self-styled Caliph of the Islamic State have openly proclaimed their intent to overthrow the corrupt Saudi royal family and take control of the two holy places--Mecca and Medina--that define the Islamic credentials of Saudi rule.

This threat from radical Sunni Islamism is the only credible external threat to Saudi independence and territorial integrity. No other movement, state or institution in the Middle East has undertaken anything remotely like this concerted anti-Saudi campaign.