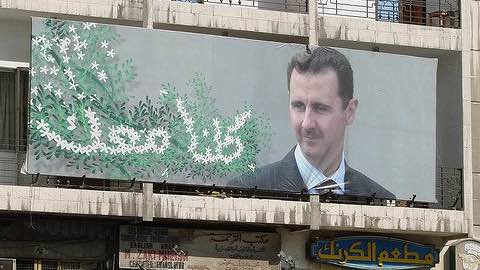 The million-dollar question: Which is worse -- the Assad regime or the Islamic State? (Photo: Michael Goodine / Flickr Commons)

The head of a Syrian exile group called Assad's warplanes 'an air force for ISIS.'

In the New York Times, Anne Barnard reported on July 3 that the Islamic State is being aided in its march on Aleppo, Syria's largest city, by -- ba-da-boom -- Syria's President Bashar al-Assad.

Syrian opposition leaders accused the Syrian government of essentially collaborating with the Islamic State, leaving the militants unmolested as they pressed a surprise offensive against other insurgent groups -- even though the government and the Islamic State are nominal enemies -- and instead striking the rival insurgents.

... Khaled Khoja, the president of the main Syrian exile opposition group, accused Mr. Assad of deploying his warplanes "as an air force for ISIS."

Under the category of For What It's Worth, Ms. Barnard also reports that "the Twitter account of the long-closed United States Embassy in Syria made its strongest statement yet about Mr. Assad's tactics."

"Reports indicate that the regime is making airstrikes in support of #ISIL's advance on #Aleppo, aiding extremists against Syrian population," the embassy said in a series of Twitter posts. In another post, it added that government warplanes were "not only avoiding #ISIL lines, but actively seeking to bolster their position."

Speaking of the Islamic State aggression that has decimated the more secular FSA, he said: “When these groups clashed, the Syrian government benefited. When you have so many enemies and they clash with each other, you must take advantage of it. You step back, see who is left and finish them off.”

Occasionally, I like to highlight the views of idiosyncratic sites. At the apocalyptic Christian site the Trumpet Callum Wood fleshes this out. What I've emphasized is a key point.

With troops stretched thin and airstrikes ineffective on their own, allowing the Islamic State to take on the rebels cuts Assad's losses. Assad can afford to soften the rebels then sit back and watch the ensuing bloodbath without having to get his hands dirty or lose precious troops. As the adage goes, the enemy of my enemy is my friend. The Islamic State wants to defeat the Syrian rebel factions, therefore, its goals align with Assad's.

... Many of the rebel groups are supported directly or indirectly by outside nations, such as Saudi Arabia and the U.S. If Assad helps the Islamic State remove the rebels, then he faces just one enemy--an enemy that doesn't have the backing of the international community.

Building on that last sentence, Callum asks the question that all inquiring minds want to know" "Who Is Worse: Assad or the Islamic State?"

If Assad lets the Islamic State remove the rebel factions, the Syrian conflict becomes a little more black and white. International forces will be faced with just two options: indirectly support Assad or the Islamic State. No nation in the Middle East or elsewhere would openly support the Islamic State. That would leave Assad as the only option--the lesser of two evils as some perceive it.

With so many long-term benefits, expect Assad to keep walking the fine line between supporting the Islamic State and destroying it.