Seizures of Ramadi and Palmyra Suggest Islamic State, Despite Setbacks, Still on a Roll 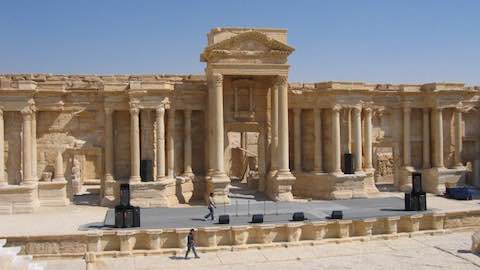 Seizures of Ramadi and Palmyra Suggest Islamic State, Despite Setbacks, Still on a Roll

One shudders to think of the Islamic State demolishing historical sites in Palmyra such as this amphitheater. (Photo: Wikimedia Commons)

The Islamic State is less a product of Islamist extremism than the legacy of Saddam Hussein.

Chairman of the Joint Chief Staffs Gen. Martin Dempsey tried to put lipstick on a pig when he framed the Islamic State's seizure of Ramadi as a strategic retreat by Iraqi forces rather than a major loss.

Of course, the Islamic State doesn't play fair, using suicide bombers, some in trucks carrying the explosive power of the truck bomb used by the Oklahoma City bomber, Timothy McVeigh, in 1995.

Still, in response, the United States is shipping 1,000 antitank rockets to the Iraqi army to halt those very suicide truck bombs in their tracks. But, no sooner than that had been announced than the Islamic State seized the historic Syrian city Palmyra. (To get an idea of its archaeological treasures, the New York Times article reporting the story features a slide show.) Besides fears that the Islamic State will demolish some of these sites are concerns it will loot the antiquities and sell them on the black market. Palmyra's strategic importance to the Islamic State, meanwhile, is that it's a hub and is surrounded by gas fields.

Many have minimized the extent of what the Islamic State has conquered. (Unitl the advent of the Islamic State, who knew conquering was still a thing?) It's true that it has just filled a vacuum in some areas that were in the middle of nowhere in Syria. But there can be little doubt, despite recent recruiting shortfalls, of its resourcefulness and relentlessness.

He begins by profiling the work of the man he calls the architect of the Islamic State, Samir Abd Muhammad al-Khlifawi, also known as Haji Bakr, a former intelligence officer in the Iraq army who was killed in combat in January 2014. Documents captured

... now make it possible to reach conclusions on how the IS leadership is organized and what role former officials in the government of ex-dictator Saddam Hussein play in it.

... What Bakr put on paper, page by page, with carefully outlined boxes for individual responsibilities, was nothing less than a blueprint for a takeover. It was not a manifesto of faith, but a technically precise plan for an “Islamic Intelligence State” — a caliphate run by an organization that resembled East Germany’s notorious Stasi domestic intelligence agency.

... Bakr was merely modifying what he had learned in the past: Saddam Hussein’s omnipresent security apparatus, in which no one, not even generals in the intelligence service, could be certain they weren’t being spied on.

Reuter provides insight into the origins of the Islamic State. It seems that when Paul Bremer, in his role presiding over the US occupation in Iraq, dissolved the Iraqi army, Haji Bakr was left out in the cold. Furthermore:

Thousands of well-trained Sunni officers were robbed of their livelihood with the stroke of a pen. In doing so, America created its most bitter and intelligent enemies. Bakr went underground and met Abu Musab al-Zarqawi in Anbar Province in western Iraq. Zarqawi, a Jordanian by birth, had previously run a training camp for international terrorist pilgrims in Afghanistan. Starting in 2003, he gained global notoriety as the mastermind of attacks against the United Nations, US troops and Shiite Muslims.

... In 2010, Bakr and a small group of former Iraqi intelligence officers made Abu Bakr al-Baghdadi, the emir and later “caliph,” the official leader of the Islamic State. They reasoned that Baghdadi, an educated cleric, would give the group a religious face.

Looks like not only much of the violence in Iraq after it was invaded by the United States, but also the Islamic State, had its poisonous wellspring in Paul Bremer's decision to disband the Iraqi army.

"Seizures of Ramadi and Palmyra Suggest Islamic State, Despite Setbacks, Still on a Roll"