Why America Lacks Credibility in the Middle East 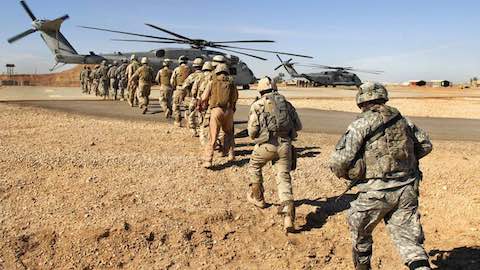 Why America Lacks Credibility in the Middle East

The problem isn't a lack of 'resolve' for the United States. It's a lack of good outcomes and basic moral consistency in the Middle East

To hear politicians and beltway pundits tell it, credibility in international relations boils down to this: Do others believe that the United States is willing and able to follow through on its word?

Actually, this is a sloppy and often pernicious way to think, leading policymakers to senselessly commit themselves to failing policies (like enforcing a “red line,” for instance) for the sake of “maintaining credibility” -- and actually undermining it in the process.

Credibility is not about resolve. Strategic credibility is actually about assuring partners that things will work out well for them if they throw their lot in with you. This perception plays a pivotal role in determining whether others will support or resist U.S. interests abroad.

The primary way agents establish themselves as credible is by making good decisions, which means forming and executing policies that generate positive outcomes for the relevant stakeholders. The stronger an agent's track record, the more likely others will be willing to get behind them -- that is, the more credibility they will have. Incidentally, this is the secret to ISIS' success: Regardless of how distasteful many find their methods and ideology, they have established themselves as one of the most effective forces at seizing territory from the governments of Iraq and Syria, making tangible progress in restoring a caliphate, and resisting the prevailing international order.

America, on the other hand, has a serious credibility problem in the Middle East. The results of U.S. interventions in the region have been consistently catastrophic: Whether in Afghanistan, Pakistan, Iraq, Yemen, Libya, or Syria, direct U.S. involvement is usually followed by an erosion of state governance, the empowerment of exploitative sub-state and non-state actors, and a dramatic rise in violence, civil tension, and unrest.

American indirect involvement, meanwhile, tends to empower corrupt, oppressive, and undemocratic forces -- such as in Pakistan, Egypt, Palestine, Saudi Arabia, and Bahrain. In terms of achieving positive outcomes, America simply has absolutely no credibility in the Middle East.

However, character is also important: Moral credibility means a nation’s intentions and motivations are more likely to be trusted.

Strategic and moral credibility are interrelated: Consistently generating good outcomes goes a long way toward bolstering one's reputation. Even if the methods for achieving an objective seem questionable, they tend to be justified retrospectively if things turn out all right. In the interim, people are much more willing to extend the benefit of doubt to those with a strong track record of success. Conversely, moral credibility can help make up for occasional bad outcomes -- an agent is afforded slack when things go awry if it’s perceived as being genuinely well-intentioned.

However, when there are glaring inconsistencies between a government’s declared aspirations (say, promotion of democracy and human rights) and their means of realization (imposing Western socio-economic models at the expense of indigenous self-determination) -- especially when paired with a general failure to realize stated objectives (producing chaos rather than order, be it liberal or otherwise) -- these generate suspicion about its real intentions and motives.

Part of what contributes to America's cycle of diplomatic and military failures in the Middle East is an underlying distrust of the United States among most Arabs, which inspires widespread ambivalence or resistance to U.S. efforts in the region. The source of this deficit has nothing to do with U.S. follow-through or resolve, as foreign policy hawks love to allege. One can be consistent with regards to backing up threats, etc. while still being a hypocrite in the moral sphere.

Indeed, this is precisely the problem America faces.

After decades of supporting the region's dictators with arms and money, Washington has now formed a coalition with both the surviving local autocrats and the Middle East's former imperial powers to “bring democracy” to Syria and (once more) to Iraq. Is it any surprise the “Arab street” is mistrustful?

It further fuels skepticism when America attempts to fight ISIS -- a group largely empowered by previous U.S. support for other non-state actors in Iraq, Libya, and Syria -- by training and arming new, ineffective, and unpopular proxy militias. Moreover, these new groups are often aligned with, and trained in, Saudi Arabia -- the power most responsible for proliferating the ideology embraced by the so-called “Islamic State.” It seems disingenuous when the U.S. condemns Russia for funding non-state actors in Ukraine, or Pakistan for doing so in Afghanistan, or Iran in Lebanon -- even as America expands its own support of insurgents in Syria.

The Arab public is outraged when U.S. policymakers decry human rights violations elsewhere while continuing to support Israel and shield it from international accountability for its occupation of the West Bank or its wars on Gaza. And it doesn’t help at all when the Obama administration, among other failings, declines to prosecute clear and grievous infractions like torture by its own intelligence agencies, while calling for regime change in other countries for the same sorts of infractions.

When American representatives lecture others about upholding the very international rules and norms the U.S. government systematically and unapologetically violates through its drone strikes and mass surveillance, enhanced interrogation, and extraordinary rendition programs, others will not take American rhetoric or ideals seriously.

These glaring contradictions imbue the entire ethical project with a cynical hue -- undermining not just American credibility, but the general value of moral discourse on the world stage more generally. This breakdown, in turn, disrupts consensus building and cooperation, threatening the long-term viability of the rules-based international order Americans sacrificed so much in years past to establish and preserve.

But there is good news: The United States can simultaneously bolster its moral and strategic credibility by adopting a more sensible foreign policy. The first step will be to adopt more modest aspirations and pragmatic strategies in order to avoid making problems worse. Within this narrower framework, the United States should strive to adopt the same policies it promotes for others.

If Washington wants to stem the growth and proliferation of non-state actors, for example, the U.S. should stop funding them as well -- and should pressure its allies to follow suit. Instead, Washington can provide material and logistical support to the relevant state actors to help these governments first contain the spread of ungoverned zones and then gradually reclaim control over lost territories. (Of course, this support should be contingent on a basic respect for human rights.)

Rather than orchestrating another destabilizing regime-change in Syria, furthermore, the United States should aspire towards gradual, viable, and meaningful reform of the state -- which will require an inclusive diplomatic approach regarding the Baathist government and its foreign patrons, as well as a piecemeal agenda for rehabilitating the state and its institutions. In the short term, this means prioritizing peacekeeping, humanitarian assistance, and reconstruction in support of a negotiated settlement rather than trying to force polarizing elections in the wake of a violent uprising.

But perhaps most significantly, if America wants to promote democracy in the Middle East, it should start by rethinking the levels and types of aid afforded to Israel and the region's autocrats absent substantial political reform.

All of these measures would undermine extremist groups, both materially and ideologically, by enhancing Arabs' self-determination while advancing international law and order. As a result, this approach could generate much better results with significantly less investment and blowback. Perhaps more importantly, these policies would help rebuild America's credibility by building a better world --in the Mideast and beyond.

Musa al-Gharbi is a social epistemologist affiliated with the Southwest Initiative for the Study of Middle East Conflicts (SISMEC). Readers can connect to his work and social media via his website: www.fiatsophia.org

"Why America Lacks Credibility in the Middle East"