Without Iran, Coalition to Confront ISIS is Doomed 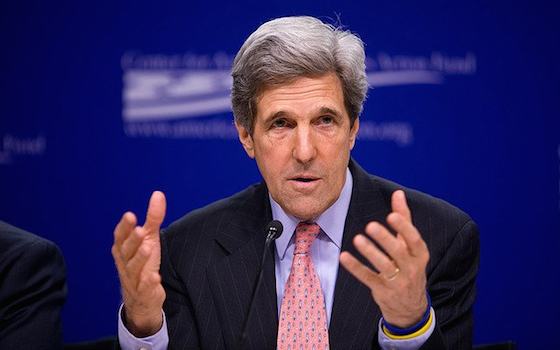 Iran is the linchpin of security in the Middle East

With the skills it has exhibited for governing (see In Raqqa, ISIL governs with fear and efficiency in the National), one can't help but wonder if it might be a good idea to just let the Islamic State have its caliphate. Impossible, of course, because of the fear factor. In fact, its brutality is like a self-destruct button that mobilizes states to join forces against it. For example, as Graeme Wood wrote in the New Republic:

... any attack on a Western city would draw an immediate and devastating counterattack on Raqqa, and wouldn't require the laborious fumigation of hundreds of mountain caves.

Wood's allusion at the end of the sentence is to Al Qaeda selling out the Taliban with 9/11, which invited retaliation on host-state Afghanistan. Meanwhile, halting the expansion of the Islamic State and rolling back its gains first requires, as I recently posted, acknowledgment by the United States of its role in enabling the Islamic State, which includes destabilizing the region by invading Iraq, failing to staunch the flow of funds from Saudi Arabia to Islamist extremist groups (especially Al Qaeda), disbanding the Iraqi Army (a number of whose commanders function in the same capacity for the Islamic State's military), allowing weaponry to fall into the hands of the Islamic State, and supporting the government in Iraq but not Syria, where the Islamic States flourishes and from which it replenishes fighters in Iraq.

Among the strategies advanced, as I also posted, are, according to a Win Without War statement:

Cracking down on Turkish, Iraqi, and other oil dealers who are purchasing ISIS's oil on the black market would cut ISIS off from its most important revenue stream.

America must push countries like Turkey to crack down on the flow of fighters and weapons across its border with Syria [as well as] the flow of weapons to other parties in the region. Arms transfers to Syrian rebels and the Iraqi military have led to ISIS gaining American-made weapons.

"Initiate a new search for broader diplomatic solutions in the United Nations,' including pushing the UN, "to restart real negotiations on ending the civil war in Syria,' which means "working to build a real coalition aimed at using diplomatic and financial pressures, not military strikes, at the international level in both Iraq and Syria.'

... "a real diplomatic partnership to deal with ISIS. ... That means serious engagement with Iran, among other players.'

Iran, of course, supports the Assad regime, which the Islamic State is sworn to overthrow. In an interview with NBC's Ann Curry, Iranian President Hassan Rouhani fleshed out his feelings about the Islamic State.

Asked about the extremists’ beheading of American James Foley and Steven Sotloff and Briton David Haines, Rouhani said ISIS’ actions are at odds with Islamic tenets.

“They want to kill humanity,” he said. “And from the viewpoint of the Islamic tenets and culture, killing an innocent people equals the killing of the whole humanity. And therefore, the killing and beheading of innocent people in fact is a matter of shame for them and it’s the matter of concern and sorrow for all the human and all the mankind.”

Before continuing with the importance of Iran in dealing with the Islamic State, at Politico, Jack Goldstone of the Wilson Center notes that the Islamic State is fighting neither a conventional war (bear in mind that, at the moment, they're not terrorists), nor a civil war, but

... a revolutionary war, in which civilians are recruited to support an ideological cause and rallied to overturn and replace regimes that are widely seen as unjust and illegitimate.

... what has made them the group force that could take over much of two countries with a total population of more than 50 million people is that they are supported by millions as the vanguard of a revolutionary movement for justice.

How could such a barbarous and brutal group as ISIL ... earn the support of those millions?

By promising to protect and avenge them against the Assad regime in Syria, which has slaughtered their children and gassed their relatives and fellow townspeople and tribesmen; and against the Shiite regime in Iraq, which has stolen their jobs and destroyed their livelihoods, contemptuously dashing the hopes and careers of Sunni Arabs in that country.

"That is why,' he adds, "the success of President Obama's strategy to destroy ISIL depends on political solutions in both Iraq and Syria that provide inclusive and resilient civilian regimes.'

Yet so far unspoken is an essential fact of life in the Middle East: There can be no political solution in either Iraq or Syria without Iran's assent.

Iran has been vigorously supporting Bashar al-Assad's regime in Syria against both moderate and extremist rebels. That places Iran squarely in opposition to President Obama's plan to build up a moderate rebel force capable of taking on both ISIL and the Assad regime forces and winning.

... creates a delicate diplomatic dilemma, but also a great opportunity. If Iran can be persuaded to adopt a similar role in Syria to the role it is already accepting in Iraq—assent to an inclusive, majority-led but minority-respecting regime, with the United States playing an active role in supporting the military forces of the government—and therefore to withdraw its active support of Assad, Iran can align itself with the broader Sunni coalition that President Obama is seeking to back a political solution in Syria.

"Creating such an alignment will be incredibly difficult,' he writes, but ...

As long as Assad is in power in Syria, however, ISIL will have an ideal recruiting environment to draw ever more fighters and supporters to its cause. Assad's departure is thus not a later phase that can be dealt with after a military campaign; it is an essential part of the strategy to make any military campaign effective. And Iran's cooperation is essential for forcing Assad to relinquish power. Integrating Iran into any strategic plan will be challenging, but success is impossible without it.

But as Reuters reported on September 13:

Accusing Iran of being "a state sponsor of terror' and backing Syria's brutal regime, [U.S. Secretary of State John] Kerry said it would be inappropriate for Iranian officials to join an Iraq conference in Paris on Monday to discuss how to curb a jihadist movement that has seized a third of both Iraq and Syria. Tehran has described the coalition as "shrouded in serious ambiguities'.

"Under the circumstances, at this moment in time, it would not be right for any number of reasons. It would not be appropriate given the many other issues that are on the table in Syria and elsewhere,' he told a news conference in the Turkish capital Ankara.

Still, in his interview with Ms. Curry, Rouhani said, "Iran will give Iraq any support it requests for combating ISIS, but made a point of saying religious sites must be protected.'

We'll give Goldstone the final word.

Nobody should underestimate the challenge of defeating ISIL. But the prospect of this crisis leading to an alignment of U.S., Sunni and Iranian interests holds out the prospect of finally creating lasting stability in the Middle East.

Iran is obviously the linchpin to regional security in the Middle East. Without it the engine of the coalition won't be hitting on all cylinders.

"Without Iran, Coalition to Confront ISIS is Doomed"