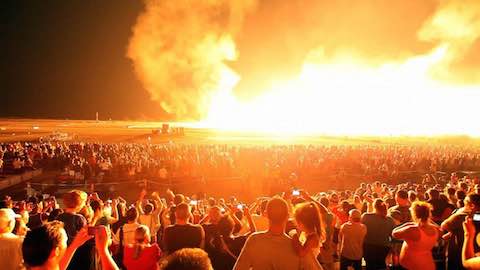 Our wartime commemorations are the functional equivalent of mounting the heads of our victims on pikes. Are we surprised that others celebrate bloodshed when we do the same?

Everyone on the Mall near the Washington Monument was looking up at the sky. I was there, too. But I wasn't looking up, at least not that far up.

Recently, I was playing Ultimate Frisbee during the noontime game on a stretch of level grass behind the Holocaust Museum. This time we were joined by thousands of people eager to commemorate the 70th anniversary of the surrender of Nazi Germany and the end of World War II in Europe. They'd shown up in droves to watch an air show of vintage planes.

I find it strange that so many people like to look at bombers. These machines visited enormous death and destruction during World War II, particularly on civilian populations. The firebombing of German cities killed 600,000 German civilians, including 75,000 children. The fire bombings of Tokyo and other major Japanese cities killed upwards of 300,000 people, predominantly civilians, and this doesn’t include the atomic bombing of Hiroshima and Nagasaki.

We would find a similar display by the Germans or the Japanese of their war planes singularly distasteful. These planes also rained death down upon the British, the Chinese, and others. But the Germans and the Japanese lost the war. And we won.

So, by the ancient laws of battle, we’re allowed our displays of war totems. Our display is the functional equivalent of mounting the heads of our victims on pikes. But it's obviously not the visual equivalent, or else we wouldn't bring our children out to gaze up at the sky and applaud these instruments of terror.

The victors were not chastened by the experience of all this destruction. During the Korean War, U.S. warplanes had almost free rein to wipe out North Korea. U.S. planes dropped 32,000 tons of napalm on Korea, twice what they dropped on Japan. They deliberately destroyed dams in an effort to destroy crops and precipitate large-scale starvation.

In his new book on the air campaign, Blaine Harden quotes Douglas MacArthur, not known for being soft-hearted, as saying: “I have seen, I guess, as much blood and disaster as any living man, and it just curdled my stomach, the last time I was [in Korea]. After I looked at that wreckage and those thousands of women and children and everything, I vomited.”

A celebration of the end of the war also took place last week in the Russian capital.

Vladimir Putin used the opportunity to mourn the enormous casualties suffered by the Russian army and the Russian people during World War II. By his side were Xi Jinping of China and Ban Ki-Moon of the UN. Unlike at past affairs -- in 2005 with George W. Bush and 1995 with Bill Clinton -- the American president was not in Moscow to attend the commemoration. Nor did the leaders of France, Germany, or the UK join Putin for the military parade. Even lowly Kim Jong Eun, the leader of North Korea, stayed home to witness the test of his new submarine-launched ballistic missile.

Putin had choice words for the absent. “During the last decade, the basic fundamental principles of international cooperation were increasingly ignored,” he said. “We saw attempts to set up a unipolar world order. We see the use of force. This kind of mentality undermines global stability.”

The United States was as committed to unipolarism in the 1990s and the 2000s as it is today, if not more so. Ditto the use of force. What Putin finds frustrating is the encroachment of U.S. geopolitics on his perceived turf, which includes Ukraine.

The shadow of the current Ukrainian conflict fell over the commemoration of the end of World War II, just as the shadow of that long-ago war continues to fall over Ukraine. To understand the depth of enmity between the current combatants, you have to understand how history shapes present grievances.

Ukrainians have never really received acknowledgment -- much less an apology -- for the great famine (holodomor) that swept through the region in 1932-33 and left nearly 4 million dead. Or the waves of class-based and ethnic-based slaughter that took place on Ukrainian territory (of kulaks and various ethnic groups including Ukrainians). The subsequent return of the Red Army to the territory between 1944 and 1947, as Timothy Snyder notes in Bloodlands, left another quarter of a million dead.

The Russians, meanwhile, harbor resentment toward all the Ukrainians who sided with the Nazis. They have as little love for fierce nationalists like Stepan Bandera, a hero to the Ukrainian right wing today, who resisted Communist rule. It is common for Russians who side with Putin to tar all Ukrainians with the fascist brush, from the leadership in Kiev to the far right-wing paramilitaries fighting the separatists in the east.

The current crisis in Ukraine will probably not truly end until Russians and Ukrainians come to terms with the past -- and also acknowledge that Putin is not Stalin, and Ukrainian President Petro Poroshenko is not Stepan Bandera.

The end of World War II didn't come until August 15, 1945, when Japan finally surrendered less than a week after the dropping of the second atomic bomb on Nagasaki.

In many ways, Asia remains even more trapped in the vise grip of World War II than Europe. It was in 1945 that the United States and the Soviet Union drew a line across a map and divided the two Koreas, a cleavage that remains today. The “peace constitution” that the United States provided -- or imposed upon -- Japan is still, more or less, in place. China, divided between Communists and Nationalists at war's end, remains that way, though the latter have a much smaller footprint in their current Taiwanese redoubt.

As I've written here before, many of the tensions in Northeast Asia revolve around “history” problems, much of it from the World War II era.

Asia can't point to a feel-good story like the rise and expansion of the European Union, in which nationalist rivalries become transmuted by common interest (initially anti-Communism, in Europe’s case) into golden cooperation. What binds together the former combatants in Asia is a shared commitment to export-led growth. It's largely because this growth has come in a phased sequence -- first Japan, then Singapore and Hong Kong, followed by Korea, now China and points further south -- that the countries in the region haven't been at each other's necks in competition for markets.

But capitalism hasn't quite tamed the great ideological passions of the 20th century in Asia. The great rivals of the Cold War -- China and North Korea on the one hand; Taiwan, South Korea, Japan, and the United States on the other -- could still deliberately or inadvertently find themselves in an escalating military conflict. The conflicts are by no means confined to these ideological categories. South Korea and Japan are still arguing vehemently over what happened in the 20th century. And China and Vietnam are clashing over territorial claims in the South China Sea that go back even further than that.

I was recently reading the letters my father sent to my mother when he was in the army during World War II. He rarely mentions the war itself. He'd turned 18 a few months before Pearl Harbor and signed up thereafter like many young men his age. But at some point his desire to fight evaporated, and he was happy enough to remain stateside. The letters he wrote to my mother, the ones that survive at least, focus on his boredom, his desire for furloughs, and his eagerness to get discharged.

Even the dropping of the atomic bombs on Hiroshima and Nagasaki gets barely a mention, though my father was glad that it would shorten the war. But on one occasion, short of writing paper, he drafted a note to my mother using the back of another letter. This letter, from someone named Cyril and dated August 9, 1945, is typed in all caps. It reads in part:

The past two days have been days that will be remembered for all time! The atomic bomb has suddenly changed our entire lives and will influence the future of all mankind. It has suddenly made obvious to everyone that another war is an impossibility if mankind and the world is to continue to exist.

If we have finally been shocked into the terrible necessity of cooperation, then this terrible weapon is indeed a boon to progress in the world.

My father would eventually change his mind about the dropping of the atomic bombs and see it as a barbarous act. Cyril, meanwhile, was wrong. We would get more wars, and we would not be shocked into the “terrible necessity of cooperation,” except intermittently.

When the instruments of death fly above us, we still look up in admiration, not horror. As long as we celebrate destruction in this way, we will be doomed to repeat it.