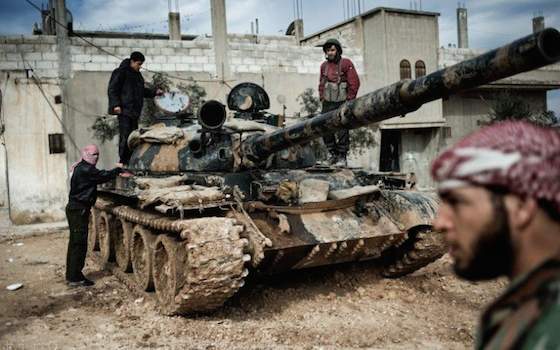 Like layers of an onion, ISIS supporters can be carefully peeled away. But not if Obama goes into Syria and Iraq with a mallet

The Islamic State of Iraq and Syria (ISIS) is a symptom -- not the cause -- of turbulence in the Middle East. It is a symptom of oppressive, corrupt, and undemocratic regimes supported and manipulated by the United States, Europe, and Iraq's neighbors, including Iran, to serve their own interests.

ISIS, in reality an offshoot of al-Qaeda, is partly the result of the U.S. invasion of Iraq in 2003. The United States, through its actions and the form of governance it created in Iraq, brought forth the sectarian divide in that country.

The West was shocked when ISIS advanced from Syria to occupy a third of Iraq, seizing Iraq's second largest city -- Mosul -- without so much as a fight. The Iraqi army, trained and equipped by the United States, melted away and left its weapons to ISIS.

ISIS subsequently surrounded the semi-autonomous region of Kurdistan. Tens of thousands of Christians, Yazidis, Turkmens, and other minorities were suddenly at the mercy of ISIS. Christians were told to convert to Islam, pay heavy taxes, leave, or get killed. Nearly 100,000 Chaldeans, the largest Christian community in the country, fled and became refugees, and thousands of Yazidis fled to the mountains to avoid almost certain death. ISIS fighters were nearly knocking at the door of Erbil, the capital of Kurdistan, before the United States launched airstrikes to help Kurdish forces and Iraqi allies beat them back.

For the West -- and especially the United States -- this was either a colossal failure of intelligence or of political leadership. The situation is further exacerbated by the meddling of nearly 10 countries in the affairs of Iraq, including the United States, Europe, Iran, Turkey, Saudi Arabia, Kuwait, Qatar, and Israel. In addition, the semi-autonomous government of Kurdistan has played a complicating influence, fighting ISIS on the one hand while consolidating its gains in disputed cities like Kirkuk on the other.

U.S. actions in recent decades have both contributed to old problems in the Middle East and created new ones altogether. President Obama's recent decision to attack ISIS in Iraq and follow it into Syria is the latest act in this ongoing tragedy.

Yes, ISIS is a threat to U.S. interests in the Middle East. But it is not an imminent threat to the U.S. homeland, as made clear by recent statements from the FBI and the Department of Homeland Security. The horrendous murder of two journalists should not be used to formulate a policy when thousands of Iraqis and Syrians were killed in an equally brutal way.

I applaud President Obama's action to rescue a few thousand Yazidis who escaped with their lives and were stranded on a top of a mountain in northern Iraq. The United States should certainly conduct such rescue missions, preferably ones sanctioned by the UN.

However, bombing ISIS and decapitating its leadership are not solutions. Such a campaign will only enhance ISIS's support rather than diminish it, and the people of Middle East will suffer further. We should learn from the way we fought al-Qaeda. Al-Qaeda adapted to the military assault by decentralizing its operations and melting into the population. It has subsequently returned in different and more potent varieties such as ISIS.

ISIS is a genocidal organization. It is so brutal that even al-Qaeda central disavowed it. But despite its extreme agenda, unfortunately ISIS has attracted a large number of Iraqis and Syrians. For the Syrian people fighting Bashar al-Assad, there is a great romanticism in fighting against a tyrant, and ISIS is the most effective anti-regime force in the field today. In Iraq, even secular-leaning Sunnis have joined ISIS's revolt against the sectarian Shiite Iraqi government. ISIS's current coalition consists of former al-Qaeda organization members, volunteers from Arab and Muslim countries and the West, Sunni tribes, former military officers of Saddam Hussein, and dissatisfied Baathist remnants who benefitted from Saddam's regime and have been rejected by the current Shiite government in Iraq.

All of these groups have helped secure ISIS's alliances and obtain new recruits. Moreover, billions of dollars in private funds from Saudis, Kuwaitis, and Qataris have landed in the pockets of Islamist jihadists in Syria, especially ISIS, with virtually no protests from their governments.

The Onion Skin model describes the organization of many revolutionary and terrorist movements. The core of the onion consists of those who are willing to use weapons to attain their goals. The layers surrounding the core represent those who provide weapons, finance, and safe houses. The subsequent layers consist of varying degrees of lesser assistance such as ideological support, acquiescence, tolerance, and indifference.

The result of bombing such an organization is killing and wounding civilians, including women and children. Even if bombing is successful in crippling the organization, it will eventually rebound with more recruits as the onion grows new layers among the casualties of the strikes. It can morph into an adaptive organism that will survive fight another day.

The true battle against such an organization is ideological, which should peel the group's layers of support from the outside. The ideological battle may require changing U.S. policies toward the region in order to address the grievances of the people toward their governments, foreign forces, or occupiers. The professed U.S. ideology of freedom and justice rings hollow amid Washington's continued support of corrupt and dictatorial Middle Eastern governments, including not least the sectarian government of Iraq and the decadent monarchies of the Gulf. Farther out, Washington's unflinching support for Israel has radicalized Islamists for decades.

Iraq has a new prime minister, but it's far from clear that its government is prepared to address the challenge posed by ISIS.

First, Iraq's new government needs to take a demonstrable stand against corruption and sectarianism. It should provide inclusive opportunities to people of all ethnic and religious backgrounds, which many Iraqi politicians give lip service to but never actually follow through on. This government should provide security to all of its citizens.

Next, Iraq must peel off from ISIS the support of Sunnis, Sunni tribal leaders, and former Baathists, which means serious outreach to the communities most disenfranchised by Maliki's government.

In concert with the United Nations, if possible, the United States should bring all parties in the cross-border conflict to the table to help to defeat ISIS, including Saudi Arabia, Syria, and Iran. Iran must reduce its meddling in Iraq and allow Iraqis to govern, acknowledging that its own past support for Maliki, like Washington's, helped create the current mess. Each of these countries has an interest in defeating ISIS, and even the Saudis and Gulf States are no doubt realizing that the monster they helped to create is a threat to them now as well.

We must build consensus to defeat ISIS, and Iran has an important role to play in this fight. So the sooner we come to terms with Tehran on major issues such as sanctions and nuclear energy, the better.

In Syria, we need to recognize that there is no military solution to the conflict. In the past, President Obama has wisely resisted the neocons' rush to war with Syria, but his resolve appears to be wavering. Bombing Syria will eventually lead to boots on the ground, and then what? We will produce more destruction in Syria, as we have already seen in Iraq, and only increase the hatred of the people of the Middle East toward the United States.