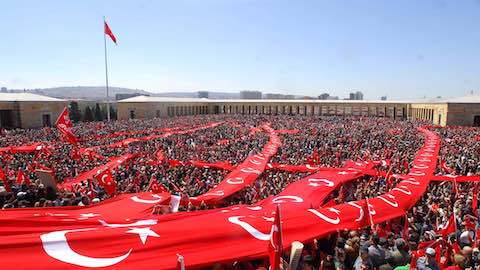 Why has Turkey refused to join the US-led campaign against the so-called Islamic State? Bill Park points to the West's inability to support the Syrian 'moderates' battling the Assad regime. It's a failure that has played into the hands of the jihadists, or so Turkey's frustrated leaders believe.

Turkey remains isolated in its approach to the Islamic State (IS) threat. In contrast to its NATO partners and to most of its middle eastern neighbours, Ankara is steadfast in its refusal to actively engage with the US-led campaign against IS. Notably, this has involved denying use by US bombers of the NATO base at Incirlik. Turkey's President Erdogan did not hold back on criticising US arms airdrops to the besieged Syrian Kurds of Kobane, as described in Rod Thornton's recent post, fearing that they could end up in the hands of Turkey's PKK, with which the Syrian Kurdish PYD is affiliated. He also alleged that some of the arms fell straight into IS-controlled territory. Allegations that Ankara has at minimum turned a blind eye to jihadists crossing into Syria from Turkey, and may have facilitated them in other ways, persist. Unsurprisingly, questions have been asked in the US about Turkey's understanding of what it is to be an ally, and President Obama seems to be giving his Turkish counterpart the cold shoulder.

Turkey's stance has set back its position in the region too. The KRG, with which Ankara had built a close economic and political relationship, openly expressed its disappointment at Turkey's failure to come to its aid as IS turned on Erbil after the fall of Mosul. Tehran did step into the breach and has augmented its engagement, as a consequence of which Iranian influence with Iraq's Kurds has risen as Ankara's has fallen. Turkey had already fallen out with Baghdad's Shia-dominated government and with the Assad regime in Damascus of course, and has since entered into wars of words with Cairo and what passes for the government in Libya over its support for the Muslim Brotherhood in those two countries. Turkey now has few friends in its neighbourhood. Its failure to come to the aid of Kobane's Kurds caused widespread demonstrations and rioting amongst its own Kurds and raised doubts about Turkey's own domestic peace process.

Ankara's logic is that the radicalisation of the Syrian opposition resulted from the drawn-out and ever more brutal struggle against the Assad regime. The west's failure to come to the aid of Syrian moderates allowed this to happen, and caused much frustration in Turkey. Its demand is that the overthrow of Assad should be prioritised over the war against IS, and that a humanitarian corridor and no fly zones should be established in northern Syria. For this to happen, the US must take the lead, and Turkey would then follow. Syria's Kurds feel that this is a ruse to allow a Turkish troop presence in the area, which could put an end to their experiment in self-government. Certainly Ankara opposes Kurdish self-rule in Syria, and suspects the PYD of collaboration with Damascus. Ankara has also called for a programme of training for moderate opposition elements. Washington has now agreed to lead such a programme, but whereas the US intends to deploy such forces as emerge against IS, Turkey believes they will be pitted against regime forces too. This apparent disagreement is likely to come to the fore in the not-too-distant future. In Iraq, Ankara argues that IS successes there are a consequence both of the initial 2002 US-led invasion, and of the subsequent marginalisation of Iraq's Sunni Arabs by the US-supported Shia government of Nuri al-Maliki. There is more than a grain of truth in this assessment.

In fact, Ankara's position is not without substance, at least in some respects. The anti-IS campaign has alienated many Sunni Arabs in Iraq, Syria and the wider region. It has meant a blind eye has been turned to the even greater death and destruction inflicted by Assad's essentially Alawite government, which in effect is being strengthened in so far as IS, one of its more effective opponents, is being weakened. The same logic applies to Jubhat-al-Nusrah, the AQ affiliated force which had itself struggled against IS and which to a degree is being strengthened as IS is being weakened -- if it is being weakened, that is. The anti-IS campaign also appears to have attracted a seemingly ever-increasing flow of jihadis from further afield. In Iraq the mostly Shia armed forces and government, who are barely trusted at all by the country's Sunni Arabs, are receiving military and other assistance from the west. Worse still, Iranian-backed Shia militias, many of which have a reputation for taking reprisals against the Sunni population, are leading the fight in Iraq, often with western-supplied arms transferred to them by Iraq's security forces. And assisting the Kurds in Iraq, Syria and, indirectly, in Turkey too, might in due course undermine the territorial integrity of each of those states. In other words, it is not only Ankara that may have got things wrong. But Turkey's pro-Sunni and anti-Kurdish agendas might also be policy dead-ends.

Ankara has additional reasons for remaining aloof. It is home to up to two million Syrian refugees, many of them unregistered. Ankara fears there could be IS cells amongst this vast swarm of people, and which it would prefer not to provoke. A prolongation of the Syrian struggle could swell these numbers still further, which could lead to a native Turkish backlash and an expansion of the Syrian conflict into Turkey itself. Of course, some kind of accommodation with Damascus might hold out greater hope of bringing an end to the fighting in Syria and even of defeating IS, but recent hints from Washington that this option might be under consideration prompted a fierce reaction from Ankara. Turkey's opposition to the Syrian regime has been so unrelenting that it can't easily turn back now. It is holding out for a Sunni victory. Ankara is also aware of IS sympathisers amongst its own population, and has no wish to incur their wrath. And, as ever, Ankara does not wish to add impetus (and arms) to Kurdish demands inside Turkey by in effect siding with Syria's Kurdish fighters.

In fact, Ankara has adjusted its behaviour a little in recent months. Under US pressure, Iraqi Kurdish peshmerga fighters were eventually allowed to transit Turkish territory in order to come to the aid of Kobane. Border controls have been tightened up. Turkey will contribute to the training programme for Syrian moderates. Its troops are training a limited number of Kurdish peshmerga, as well as units of the Iraqi army. Ankara has also declared its readiness to aid any -- preferably Sunni Arab-led -- assault on IS-held Mosul, although not with 'boots on the ground'. But its minimal interpretation of the obligations of alliance, its failure to share the more widespread assessment of the regional threat posed by IS, its cold-hearted stance towards Kobane's defenders, and its pro-Sunni leanings, have lost it a great deal of trust. Furthermore, its failure to oppose with any determination the jihadi elements of the Syrian opposition, and the suggestion that it might even have supported them, has aroused suspicion that Ankara shares an ideological --although not behavioural --affinity with IS in its desire to see the emergence of a more unified Sunni community in the middle east, albeit one preferably overseen from Ankara.

President Erdogan's foreign policy advisor, Ibrahim Kalin, has referred to Turkey's 'precious loneliness'. The implication is that Turkey is acting on principle, and is playing a long term game. In the meantime it is prepared to be patient, and diplomatically isolated if necessary, until it is proved right. This suggests a remarkable self-confidence. But the consequent isolation might be real, long-lasting, and ultimately very damaging to Turkey.

Bill Park is a senior lecturer in the department of defence studies at King's College London.