Is Turkey Holding Up a Resolution in Syria? 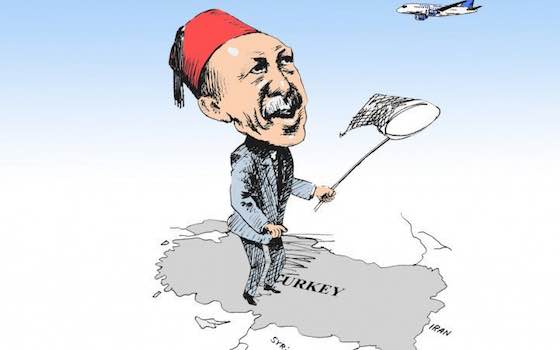 Is Turkey Holding Up a Resolution in Syria?
(Image: valeriy osipov / Flickr)

The pieces for a political resolution of the Syrian civil war are finally coming together.

But the situation is extremely fragile, which is not good news in a region where sabotaging agreements and derailing initiatives comes easier than sober compromise. While many of the key players have already begun backing away from their previous "red lines," there remains one major obstacle: Turkey.

Back in August, Abbas Habib, coordinator of the Council of Syrian Tribes, met with Russian Deputy Foreign Minister Mikhail Bogdanov to explore the possibility of a "preliminary conference" of the antagonists -- first in Moscow, then in Syria. In November, the Russians also met with Qadri Jamil, a leader of the Popular Front for Change and Liberation, an in-house opposition party that functions inside Syria. The outcome of the November talks was an agreement to "promote the launch of an inclusive intra-Syrian negotiation process on the basis of the Geneva communiqué of June 30, 2012."

The 2012 Geneva agreement called for "the establishment of a transitional governing body, which would include members of the present government and the opposition, an inclusive National Dialogue process, and a review of the constitutional order and the legal system." Implementation dissolved in the face of intransigence on all sides, and stepped up support for the armed opposition by Saudi Arabia and the other Persian Gulf monarchies, plus the United States, Turkey, and France.

But two more years of brutal warfare has accomplished very little except generating millions of refugees, close to 200,000 deaths, and widening instability in neighboring countries. The Syrian government of Bashar al-Assad now admits there is no military solution to the war, and the U.S. government has backed away from its "Assad must go" demand. According to David Harland of the Center for Humanitarian Dialogue, most of the rebels and their backers have also concluded that "Assad's departure cannot be a precondition for talks."

In essence, most of the players fear the Islamic State (or ISIS) more than they do the repressive Assad regime. As Harland puts it, "Better to have a regime and a state than not have a state."

But that approach runs counter to Turkey's strategy, which has as its centerpiece the ouster of Assad. Indeed, the government of President Recep Tayyip Erdogan argues that defeating the Islamic State is secondary to overthrowing the Damascus government, and that once Assad is gone, the Islamic extremists will disappear.

That analysis -- shared by virtually no on else in the region -- is why the Turks have locked horns with the United States by refusing to support the Kurds fighting the Islamic State to hold the Syrian border town of Kobani. Most of the Kurds involved in that battle are members of the Syrian Kurdish Democratic Union Party (PYD), an offshoot of Turkey's long-time nemesis, the Kurdistan Workers Party (PKK). As Erdogan told reporters, "The PKK and ISIS are the same for Turkey. It is wrong to view them differently. We need to deal with them jointly."

But aside from the Syrian Army, the PYD is the only serious military force resisting the Islamic State, a fact that even the U.S. government has come around to recognizing. Initially reluctant to support a group tied to the PKK -- officially designated a "terrorist organization" by the U.S. and the European Union -- the Americans have done a 180-degree turn, supplying the PYD with arms, ammunition, and food.

Under pressure from the United States, France, and Britain, Turkey allowed a modest number of Kurdish peshmerga forces from Iraq to cross the border and fight in Kobani, and agreed to train insurgents, including Kurds, to fight in Syria. But whom those soldiers will fight is hardly clear.

So far, the Erdogan government has refused to allow the United States to use its huge Incirlik air base to bomb Islamic State forces in Syria and Iraq unless Washington agrees to support Ankara's four demands: a no-fly zone over Syria, a "safe zone" on the Turkish-Syrian border, training of rebels, and equal targeting of the Islamic State and the Assad regime.

The Americans are already instructing rebel forces in Jordan and Qatar, preparing to do so in Saudi Arabia, and appear willing to pick up the bill if Turkey opens up training camps. Washington, however, is less enthusiastic about a "safe zone," which U.S. Secretary of State John Kerry called "premature."

What a "safe zone" would actually involve is still unclear, although Turkish Prime Minister Ahmet Davutoglu says it should include the five northern cities of Idib, Latakia, Hasakah, Jarablus, and Kobani -- a hefty slice of Syrian territory. And for the United States to establish it by force would certainly violate international law unless it had UN sanction, and Russia is unlikely to permit that. It would also put the Obama administration at odds with its Kurdish allies in Kobani, who see the "safe zone" as just an attempt by Ankara to meddle in Kurdish affairs.

The "no-fly zone" would require the United States to smash up Syria's air defense system and ground its air force. That would not be terribly difficult -- though it has risks -- but it would mean that the U.S. would essentially be at war with Syria. "No-fly" zones also don't have a particularly good track record in the region. The United States imposed no-fly zones in northern and southern Iraq for over a decade, but it took the U.S. Army to overthrow Saddam Hussein.

Part of this hesitation is the fear that the war will spill over into Turkey, something that has already happened to a certain degree. There have been several car bombings on the Turkish-Syrian border, and last year car bombs in the Turkish town of Reyhanli killed 43 people and wounded dozens more. While Ankara blames Syria, the locals blame the Syrian rebels.

In October, Turkish authorities in Gaziantep, a city 40 miles north of the Syrian border, seized dozens of suicide vests, hundreds of pounds of powerful C-4 explosives, grenades, and Kalashnikov rifles. Local authorities say that the Islamic State is active in the area and has cautioned Westerners they might be potential kidnap victims.

There are also proposals for local ceasefires that might lay the foundation for a general peace agreement. The UN's special envoy to Syria, Staffan de Mistura, is trying to work out an armistice in Aleppo, Syria's largest city. Russia supports the proposal and de Mistura said the Damascus government expressed "constructive interest" in such an agreement.

In early December, De Mistura met with Hadi al-Bahra of the Western-backed Syrian National Coalition and the following day with various rebel groups in Gaziantep.

According to Al-Monitor, the plan would "focus on the real threat of terrorism as defined by the resolutions of the Security Council," reduce violence, and move toward a "political solution." Under the terms of the ceasefire, all groups would keep their arms. This latter point is an important one, because an earlier ceasefire in Homs required disarmament, an action that many of the opposition groups interpreted as surrender.

But the Erdogan government is not happy with a focus on "terrorism" that doesn't include the Assad government, a posture that has isolated Turkey regionally and internationally. At the 60-nation meeting in Brussels on December 3, Turkey's argument equating the Islamic State and the PKK received zero support. "Erdogan's fixation with regime change in Syria has blinded his practical decision-making," Suat Kiniklioglu, a former member of parliament for the president's Justice and Development Party, told the Financial Times.

Ankara's obstinacy around Kobani touched off riots that killed more than 30 people in Kurdish towns and villages all over Turkey. And it threatens to derail one of the Erdogan's more successful initiatives: peace talks with the Kurds.

Ankara is certainly in a position to cause trouble. It has already permitted rebel groups, including the Islamic State, to ferry fighters and supplies through its long border with Syria. So it's hard to imagine a lasting peace without a buy-in from Turkey.

Putting the Pieces Together

The Erdogan government is not the only player in the Middle East that would like to see the Syrian civil war continue. Israel has been aiding rebel forces in southern Syria and has bombed suspected government weapons depots on several occasions.

Getting all the rebel groups on board will be no picnic either. The Islamic State is not interested in talking with anyone, and the Free Syrian Army has little support inside the country. The Kurds are willing to talk, but about what? Autonomy? The very thing that Ankara fears the most?

In Washington, will the newly resurgent Republicans in Congress -- along with some Democrats and presidential hopeful Hillary Clinton -- balk at anything that keeps Assad in power, even if only temporarily? And, by the same token, will the Syrian government be deluded into thinking it can win a military victory?

Nonetheless, writing in Foreign Policy, journalist James Traub holds out hope that the latest proposed talks could lead to "an end to the war, a comprehensive reform of the constitution, and internationally supervised elections."

There are myriad ways that a peaceful resolution of the Syrian civil war can be derailed, but the pieces for an agreement are on the table. Failure to put them together will accelerate the destabilizing effects of the war in neighboring countries and deepen the misery of the Syrian people.

"Is Turkey Holding Up a Resolution in Syria?"