Another Illegal War in the Middle East 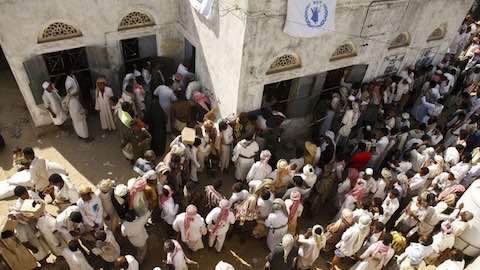 The Saudi intervention in Yemen perpetuates the lawlessness of the so-called 'War on Terror.'

Saudi Arabia has commenced military operations against the Ansarullah fighters of the Houthi movement in Yemen.

The Saudi intervention was not unexpected. Over the last few weeks, there were signs that the United States and the Saudis were preparing the ground for direct military intervention in Yemen in response to the Houthis’ seizing the Yemeni capital of Sana’a last January.

The appearance of a previously unknown Islamic State element in Yemen, which was supposedly responsible for the recent massive bomb attack that killed over 130 people, and the subsequent withdrawal of U.S. diplomatic personnel were the clear signals that direct intervention was imminent.

With the fall of al-Anad air base, where the U.S. military and CIA conducted drone warfare in Yemen, and the seige of the port city of Aden, where disposed President Abd Rabbuh Mansur Hadi had fled, it was almost certain that the U.S. would greenlight its client states to intervene.

Saudi Ambassador Adel al-Jubeir cloaked the role of Saudi Arabia within the fictitious context of another grand coalition, this time led by the Gulf Cooperation Council (GCC) -- the corrupt collection of authoritarian monarchies allied with the United States and the other Western colonial powers.

Al-Jubeir added that before launching operations in Yemen, all of Saudi Arabia’s allies were consulted. The meaning of that statement is that the U.S. was fully invested in the operation.

Even though the ambassador stressed that Washington was not directly involved in the military component of the assault, CNN reported that an interagency U.S. coordination team was in Saudi Arabia. A U.S. official subsequently confirmed that Washington would be providing logistical and intelligence support for the operation.

And what was the justification for launching a military operation not sanctioned by the United Nations Security Council?

According to the Saudis, they have legitimate regional security concerns in Yemen. Their argument was that since they share a border with Yemen, the chaos that erupted over the last few months -- culminating in what they characterize as a coup by the Houthi insurgency -- forced them to intervene to establish order and defend by “all efforts” the legitimate government of President Hadi.

But this is becoming an old and tired justification for criminality in support of hegemony.

The double standard and hypocrisy of U.S. support for the Saudi intervention in Yemen, compared to Western and U.S. condemnation of Russia's regional security concerns in response to the coup in Ukraine, will not be missed by most people.

And so the conflagration in the Middle East continues.

The U.S. and Saudi geo-strategic interest in containing the influence of Iran has trumped international law and any concerns about the lives of the people of Yemen, Syria, Iraq, Lebanon, and Bahrain. Militarism, with war as the first option, has now become the default instrument of statecraft in an international order in which power trumps morality and law is only applied to the powerless.

"Another Illegal War in the Middle East"