U.S. and Iran's Two-Track War Against the Islamic State 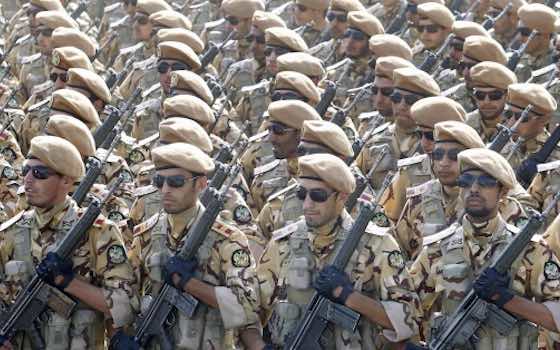 U.S. and Iran's Two-Track War Against the Islamic State

Iran is a silent partner of sorts in the war against the Islamic State.

President Obama is loath to commit troops on the ground to halt and roll back the progress of the Islamic State. Instead, writes the Helene Cooper in the New York Times, he "is becoming increasingly dependent on Iranian fighters as he tries to contain the Islamic State militant group in Iraq and Syria." At least until the United States is able to bring Iraq's armed forces up to speed (don't hold your breath). Though "American officials have said the United States is not coordinating with Iran, one of its fiercest global foes, in the fight against a common enemy."

Nevertheless, "American war planners have been closely monitoring Iran's parallel war against the Islamic State" via "conversations on radio frequencies that each side knows the other is monitoring." The Iraqi military has become an intermediary between the United States and Iran.

One obstacle to U.S. acknowledgment of Iran's initiatives is the leadership -- and actual physical presence at times on the front lines -- of Maj. Gen. Qassim Suleimani, the head of Iran's Quds Force.

Christopher Harmer of the Institute for the Study of War, writes Ms. Cooper, said, "There's just no way that the U.S. military can actively support an offensive led by Suleimani. … He's a more stately version of Osama bin Laden."

Another obstacle to acknowledging Iran is it throws red meat to conservatives.

"We share the president's goal to degrade and defeat ISIL," Senator John McCain, Republican of Arizona, and Senator Lindsey Graham, Republican of South Carolina, said in a statement Tuesday. "But success in this mission will not be achieved by capitulating to Iran's ambitions for regional hegemony."

But the fact remains that "the only force with the ability to bring Kurdish troops, the Iraqi Army and the Shiite militias together to fight the Islamic State," says Landon Shroder, an intelligence analyst for corporations in Iraq who Ms. Cooper cites, "is Iran."

"U.S. and Iran's Two-Track War Against the Islamic State"