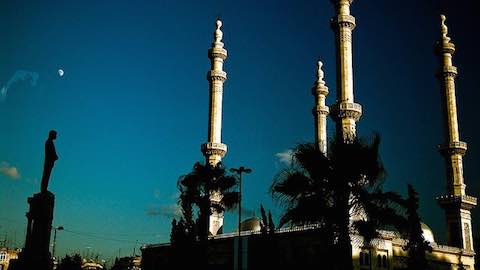 The Islamic State is experiencing success recruiting Westerners with no religious background, including Islam.

In a New Yorker article titled Journey to Jihad: Why are teen-agers joining ISIS?, Ben Taub chronicles the misadventures of a Belgian boy, Jejoen Bontinck, who hooked up with the Islamic State. Actually the piece is more remarkable for the story of his father. Though he may have become slightly unhinged in the process -- and who wouldn't? -- Dimitri Bontinck went to unheard of lengths, including trips to Syria (which he still makes on behalf of other parents who have "lost" their children to the Islamic State), to extract his son from the clutches of the Islamic State.

Aside from the Bontincks' what jumped out of the article was an aspect of the Islamic State of which I wasn't aware.

"Typical recruitment patterns in Europe and the West tell us that it helps if that person doesn't have a religious background," Maajid Nawaz, a former Islamist recruiter who now runs a counter-extremism think tank in London called Quilliam, told me. Converts and the newly devout, "dislocated from the traditional hierarchies" of Islam, are less likely to challenge a purported authority on religious matters.

That lends further credence to those who maintain that the Islamic State practices and propagates a bogus form of Islam, if it's Islam at all.

The horror with which one looks on the Islamic State makes one think it's unique. But it likely has precedents in history. ABC News reports:

After President Obama's remarks comparing ISIS militants to medieval Christian crusaders ignited a firestorm of criticism on Thursday, ABC News wanted to know: how accurate is that comparison?

"Lest we get on our high horse and think this is unique to some other place, remember that during the Crusades and the Inquisition, people committed terrible deeds in the name of Christ," the president told an audience at the National Prayer Breakfast on Thursday.

Some historians, such as Thomas Madden of the University of St. Louis, bristled at the comparison. From the ABC News report:

"[President Obama] seems to be casting [the Islamic State] as an example of a distortion of Christianity and trying to compare that to what he sees as a distortion of Islam in the actions of ISIS," Madden said. "The initial goal of the Crusades was to give back lands to Christians that had been conquered, due to Muslim conquests."

Talk about simplifying the Crusades. Should I consider enrolling in the University of St. Louis, remind me that it employs instructors such as Madden. Another historian, Thomas Asbridge of the University of London, was less blanketing in his condemnation of the president. He told ABC News:

"It is true to say, that by modern standards, atrocities were committed by crusaders, as they were by their Muslim opponents, it is however, far less certain that, by medieval standards, crusading violence could be categorized as distinctly extreme in all instances."

Okay, the moral relativity ("by medieval standards") adds nothing to the conversation. If need be, we will just extend the analogy and compare the entire European Middle Ages to the Islamic State. Brutality is timeless. More from ABC News:

Asbridge said he doesn't have a problem with the president reminding the world that the Christian Church "advocated violence, and at times even encouraged its adherents to engage in warfare" but to suggest a causal link between ISIS and the distant medieval phenomenon of the Crusades is "grounded in the manipulation and misrepresentation of historical evidence."