Islamic State May Not Be Worth a Strategy 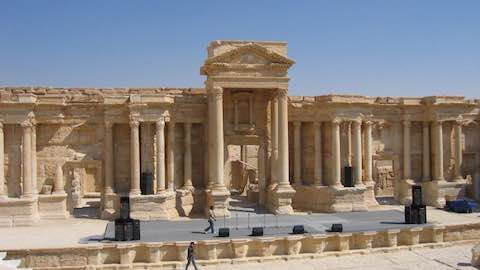 Islamic State May Not Be Worth a Strategy

The Islamic State's strategy is as sophisticated as its tactics are primitive. Pictured: Recently conquered Palmyra. (Photo: Wikimedia Commons)

The United States may still be wedded to thinking of the Islamic State as a second-rate threat that only needs tactics, not a strategy, to defeat it.

In an article for Politico titled Barack Obama Still Underestimates ISIL, J.M. Berger writes that, with the fall of Ramadi in Iraq and Palmyra and Syria to the Islamic State, Washington, including President Obama, has

... sought to recast the Islamic State's victories as "tactical" setbacks. Variations on this line were trotted out by the Pentagon and other officials first, and reiterated by the President in an interview published Thursday, in response to a question about the loss of Ramadi: "No, I don't think we're losing. There's no doubt there was a tactical setback, although Ramadi had been vulnerable for a very long time, primarily because these are not Iraqi security forces that we have trained or reinforced."

Why make such a big deal about that? Berger writes: "For those who do not speak Wonkese, making reference to an enemy's ‘tactical' success is code for saying that the enemy is not ‘strategic.'" A quality "clearly lacking amongst the vulgarians of the world--heedless brutes such as ISIL. Tactics are short-term ploys, easy to dismiss. Strategy is for winners."

But, Berger maintains, it's the United States, in fact, that "is itself sorely lacking in strategy, whether in its pedestrian or mythical definitions, with regard to the problem of ISIL. We have deployed a fairly limited collection of tactics, with an increasingly baseless confidence that these will ‘buy time' for improbable political resolutions in Iraq and Syria." And buying time "is inherently tactical, or in this case, magical."

Furthermore, Berger convincingly points out, the Islamic State is positively awash in strategy. To wit:

(1) Establish a presence in territories rife with pre-existing political, ethnic, tribal and/or sectarian tensions, whether just simmering or openly bloody.

(2) Accentuate these divisions using calculated terrorist attacks, creating conflict among potential adversaries to erode their morale and effectiveness, and whenever possible, pit them against each other in an atmosphere of escalating violence.

(3) When military control of such territories can be established, extract their resources to fund and fuel additional expansion.

(4) Use a carefully calibrated messaging apparatus to project an image of strength and unity that exceeds the reality on the ground, while highlighting the political and military weaknesses of adversaries.

(5) Indoctrinate recruits using the language and techniques of an apocalyptic, millenarian cult. This may be a calculated strategy, or it may reflect ISIL leaders' actual beliefs. Recruits may be local or global, and may be initially drawn to ISIL for pragmatic, political reasons, or they may be attracted primarily by its ideology. But once they are in the crucible, the ideology is liberally reinforced using every available means.

In many ways, the group is staying true to a vision, laid out in documents years ago, of how it would carve out and govern a caliphate, or Islamic State. Even as it differed from Al Qaeda in its desire to hold territory, it envisioned itself as being at perpetual war with its surrounding enemies and saw its turf more as an ever-shifting zone of control rather than a place with boundaries.

In his studies of the group, [Brian Fishman, a counterterrorism analyst at the New America Foundation] has coined a term for what it has become: a "governmental amoeba."

"They conceptualize the caliphate as the people living on territory the caliphate controls, rather than a fixed geography," he said, adding, "What matters to them is commitment to the caliph."

As for how to deal with the Islamic State's strategy, as well as its tactics from hell, Arrango and Barnard report:

"The only solution for the situation now is national reconciliation governments in both countries, Iraq and Syria, which is impossible now," said Jalal Zein al-Din, a Syrian journalist who is part of an antigovernment news agency that operates partly in Islamic State territory. "So I.S. is going to remain in the region, a state from Raqqa to Mosul."

"Islamic State May Not Be Worth a Strategy"