Healing or Harming? The Provision of Health Care by Peacekeepers 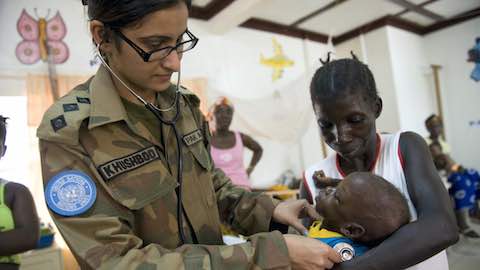 Healing or Harming? The Provision of Health Care by Peacekeepers (Photo: tennsoccerdr)

How can the quality of health care provided by UN peacekeeping missions be improved? Sara Davies argues that not enough attention has been paid to the 'game changing' relationship between the health of peacekeepers and the assistance available to civilians in emergency settings.

The United Nations has sixteen missions deployed across four continents. 128 countries contribute personnel to those missions – a workforce of 112,696 in all, made up of troops, police, international and local civilian staff, and UN volunteers.[1] Keeping those personnel fit and healthy, particularly within the difficult and dangerous environments in which they are frequently deployed, is a significant medical undertaking.

Peacekeepers face a wide range of risks to their physical and mental health, and are more likely to die from accidents or infectious diseases than from combat. Civilians, meanwhile, face the risk of contagion when peacekeepers are deployed without pre-deployment medical checks, and when peacekeepers provide medical care that does not adhere to appropriate safeguards for infection control and treatment.

What actions and measures are available to address the quality of health care coverage and humanitarian health assistance available within peacekeeping missions? To date, there has been insufficient attention to the ‘game changing’ relationship that may exist between the health of peacekeepers and the availability of health care assistance to civilians in emergency settings.

Malicious acts of violence account for only a small proportion of the cases in which medical services have to be provided to peacekeepers. [2] The physical and mental health of peacekeepers themselves is only one aspect of what is a two-way interface between peacekeeping personnel and the civilian populations of the societies in which they serve. The health of peacekeepers can be affected by diseases present in the local environment (for example, malaria or dengue fever), but the reverse is also the case – as was seen in Haiti where cholera was allegedly spread from peacekeeping troops to the local population. Peacekeepers and local populations face, to some extent at least, “shared” health risks – often in environments where health resources and expertise are already severely strained.

However, there are also instances where serious public health events are perceived to threaten the safety of peacekeeping personnel, which can create tensions between the objectives of the Mission and the Troop Contributing Countries (TCCs). The Ebola epidemic in West Africa and fear of its potential impact on peacekeeping troops – especially those serving with UNMIL (United Nations Missions in Liberia) in Liberia – has attracted significant attention. A number of TCCs expressed concern for the safety of their troops. The Philippines actually withdrew its 115 troops from the mission, despite assurances from Secretary-General Ban Ki-moon about the limited threat posed to them:

All United Nations personnel in Liberia have been educated about the appropriate preventive measures that would minimize the risk of contracting Ebola, which is not airborne and requires direct contact with the bodily fluids of a symptomatic infected person or the deceased. I am therefore confident that United Nations personnel may continue their important work in Liberia.[3]

The Ebola outbreak in Liberia highlighted not just the unpredictable health risk that peacekeepers may be asked to face, but an underlying expectation that in such an emergency, battalions with medical units should assist outbreak-affected areas. Moreover, there is an embedded presumption that increasing capacity and resources would reduce both harm and infection to civilians. This presumption may not be a valid one at present. Inadequacies in the quality of medical care being provided to both troops and civilians in a number of peacekeeping missions raise questions about whether the risk of infection and contagion through inadequate care practices could be avoided if UNMEER (UN Mission for Ebola Emergency Response) in West Africa became a ‘template’ for future missions to arrest the spread of infectious disease outbreaks.

However, the Ebola outbreak highlighted another tension within peacekeeping missions – that of balancing their military and political mandate with the humanitarian mission of health care delivery. The decision to restrict UNMIL to their compounds during the initial stages of the Ebola outbreak had a significant negative impact on the local health programs that the mission’s medical units had been delivering. [4] This dependence on peacekeeping missions for primary health care highlights an important problem associated with chronically weak state capacity.

The precariousness of such arrangements highlights the broader complication that arises from civilians coming to rely upon peacekeepers for humanitarian aid.

The UN has long articulated a necessary division of roles and responsibilities between its humanitarian and military actors. In practice this separation sometimes disappears – often for well-intentioned reasons. Understandably, in emergency settings, medical units within a peacekeeping contingent may be the only capacity available to displaced civilian communities. But there are also a number of UN missions’ where peacekeepers deliver medical care in peaceful, non-emergency environments. This sort of assistance may not contribute to building long-term of health care capacity within that country. What is more, serious ethical questions are raised by the practice of military units providing health care to win ‘hearts and minds’.

Prioritising the health of civilians and peacekeepers

Based on an assessment of the relationship between the mandates of 16 peacekeeping missions and their delivery of medical assistance, four specific courses of action would help to focus minds on reducing the negative health impacts of peacekeeping, while maximising the positive contributions:

One of the key challenges peacekeepers face is to stay healthy in conflict-affected environments. The environments in which peacekeepers are deployed are frequently beset by infectious diseases. They often have rudimentary, sometimes non-existent, health facilities. The civilian population that seeks medical assistance from these missions suffers not just trauma-related injuries but also additional poor health in general, with high levels of child and maternal mortality. UN peacekeepers are not in a position to solve these problems – their primary responsibility is to provide (or maintain) a stable situation in which other humanitarian actors and development agencies may work. Yet peacekeeping operations at the very least have a responsibility not to make health problems worse. They may also, if handled carefully, make some positive contribution to providing health services to the community in which they serve, in addition to providing appropriate and necessary services to peacekeeping personnel themselves. The key is to ensure that there is a basic level of good practice in medical care delivery across all missions.

[4] Here it is important to distinguish between the UNMIL mission and UNMEER – the UN Mission for Ebola Emergency Response, the UN’s first ever emergency health mission. See http://www.un.org/ebolaresponse/mission.shtml

"Healing or Harming? The Provision of Health Care by Peacekeepers"